Art history as a sitcom: Jayson Musson serves up satire and nostalgia in Philadelphia exhibition 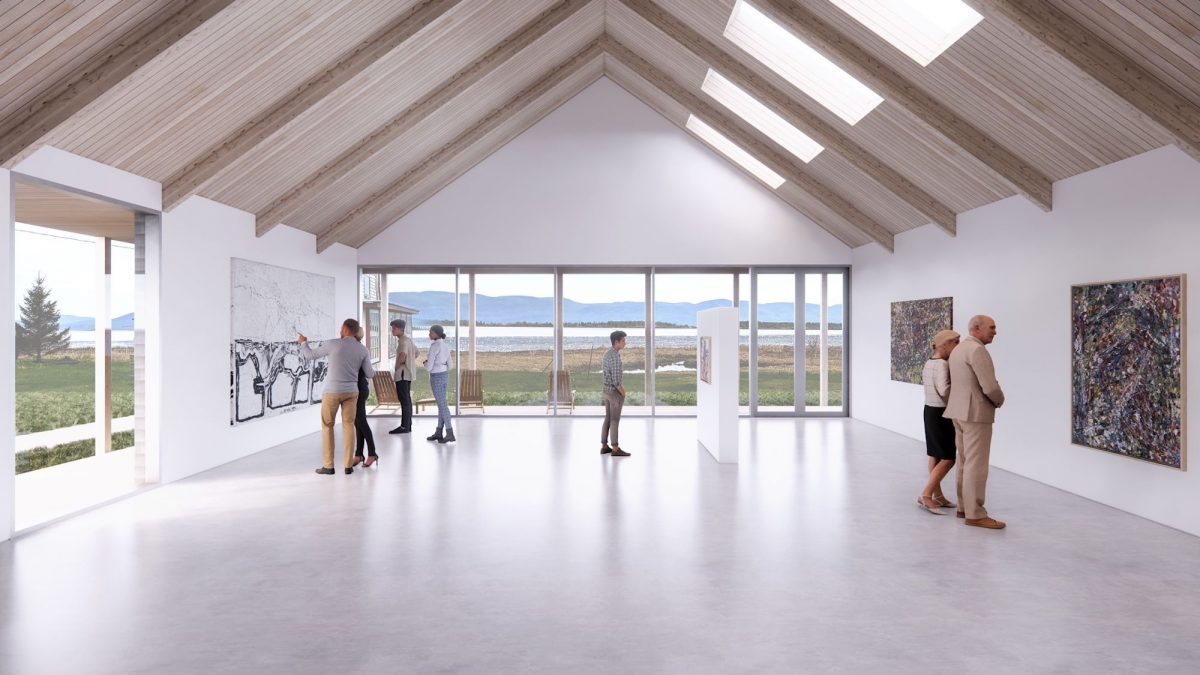 The boundary-breaking abstract painter Jean-Paul Riopelle, arguably Quebec’s most celebrated artist and consistently one of the most expensive Canadian artists at auction, spent his final years living and painting on the Île-aux-Oies, a tiny sliver of an island in the St. Lawrence river just north of Quebec City. Now the artist’s partner during the last 15 years of his life, Huguette Vachon, is planning to build a museum in his honour on the adjacent Isle-aux-Grues.

The proposed C$4.3m ($3.3m) Musée-Atelier Riopelle would span some 3,000 sq. ft and, if planning and fundraising go smoothly, could welcome visitors as early as the summer of 2024.

The museum will initially showcase Riopelle works from Vachon’s personal collection, as well as augmented reality features to be narrated by the renowned Quebecois playwright Robert Lepage. “Later, we will expand the collection”, Vachon told La Presse, “but we are already able, with the works belonging to me, to sustain a beautiful space for years”.

Plans for the museum, designed by the architecture firm Atelier Pierre Thibault, call for two wood-shingled structures—one modelled on Riopelle’s house on Île-aux-Oies, the other on his studio in the Laurentian mountains—with a glass-walled vestibule connecting them and a covered veranda with benches running around the entire exterior of the building.

“It’s a modest project in its dimensions, but significant for the way it will anchor Riopelle’s work in the landscape that inspired him,” says architect Pierre Thibault. “That’s why I wanted the project to have not only interior spaces but also protected exterior spaces so visitors can commune with the landscape.”

For Thibault, an important part of the experience of the museum will be following in Riopelle’s footsteps on the journey to reach it, which involves a 30-minute ferry ride in warmer months, or a short plane ride in winter. “If you go there in the winter, you have to take a plane, and when you’re in the air you look down on these huge sheets of ice floating down the river, and they look just like Riopelle’s paintings,” he says. “His big nordic series of the 1970s in black and white—that’s what you see from the plane. It really drives home the connection between that landscape and his work.”

Riopelle devotees who make the pilgrimage to Isle-aux-Grues will be in for a treat, and not only because of the works on view and the vistas of the St. Lawrence river framed by the Appalachian and Laurentian mountains to the south and north. The specialty of the Fromagerie de l’Île-aux-Grues, the island’s cheesemaker, is a soft, triple-cream, non-pasteurised cow’s milk cheese known as Le Riopelle de l’Isle, which will be available at the museum’s café.

The Musée-Atelier Riopelle is not the only Riopelle-centric project afoot in the artist’s native province. The Musée National des Beaux-Arts du Québec in Quebec City is planning to build a new pavilion, dubbed Espace Riopelle, which will be devoted to his work. The winning design for that C$20m ($15.5m) project is due to be announced by the end of next month, with construction expected to begin next year.

Following Riopelle’s death in 2002, his daughters Yseult and Sylvie Riopelle were embroiled in a long-running legal dispute with Vachon over more than 700 of his paintings, which Vachon’s company had purchased from the artist for just C$1.5m ($1.1m) in 1996. The suit was settled more than two years later with the sale of several works to cover outstanding succession expenses.

In 2019, Yseult Riopelle co-founded the Jean Paul Riopelle Foundation, which among other endeavours is planning events and exhibitions to mark the centenary of the artist’s birth next year. Vachon, meanwhile, operates the Fondation Riopelle-Vachon, set up before the artist’s death.