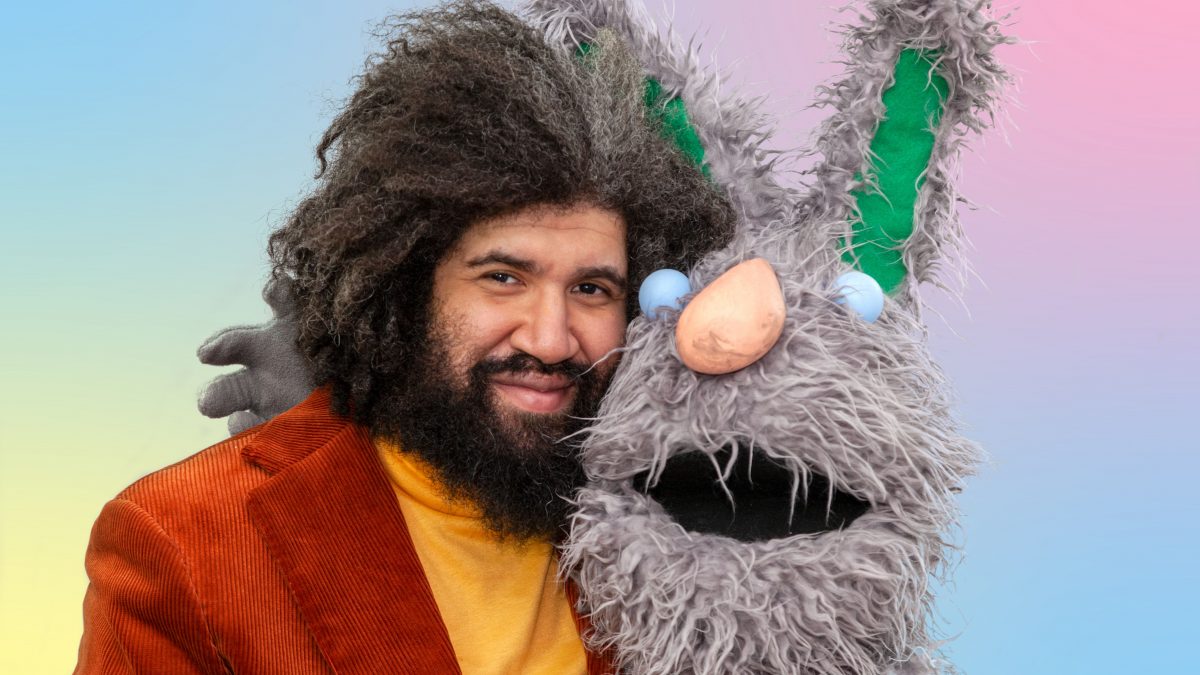 The Philadelphia-based artist Jayson Musson’s exhibition His History of Art at the Fabric Workshop and Museum in Philadelphia blends the nostalgic familiarity of situational comedies (sitcoms) with a crash course in art history—yet through the artist’s satirical take on the pillars of the canon.

In the show’s namesake three-channel video installation, the raucous puppet protagonist Ollie sits down with Musson’s alter-ego Jay to argue about whether art matters. The puppet, with ping-pong ball eyes, as well as the set, the props and the costumes, have all been made in-house at the museum’s workshop. A part of the exhibition is the film’s set where the animatronic version of Ollie is perched on the couch, surrounded by the video’s reproductions of historic artworks.

“As Duchamp said, [the] ‘viewer completes the work of art’, so give yourself a hand for giving meaning to this assortment of junk,” Ollie rants. He is shown alongside an oozing clock rug pulled from Dalí’s Surrealist painting The Persistence of Memory (1931); a foam Pieta chair in the manner of Michelangelo’s late 15th-century marble masterpiece; a miniaturised, 3D-printed version of Anish Kapoor’s public sculpture Cloud Gate (2004); and a wooden door painted in the spirit of Frank Stella’s enamel painting The Marriage of Reason and Squalor II (1959), among other art historical nods.

The film, which Musson shot in the rhythm of classic sitcoms with laugh tracks and one-liners, also includes “cameos” by the likes of Picasso in his signature white underwear and a larger-than-life foam replica of the Venus of Willendorf.

Musson, who tells The Art Newspaper that his childhood entertainment was a mix of action cartoons and late-night shows like The Arsenio Hall Show and Saturday Night Live, blends his inspirations into the dynamic between the two talking heads.

“That’s what art is: embellishment supported by aesthetics,” Jay declares in the video as his eyeballs turn a demonic black. Ollie’s dismissal follows after a cut to a fish tank with a crucifix inside, an homage to Andres Serrano’s Piss Christ (1987). “Why should I care about art? It has nothing to do with my everyday life,” the puppet says.

Musson positions himself somewhere in between the film’s opposing voices, with an admitted fondness for Ollie, “simply because he’d be more fun to chill with”, he says. The artist agrees with Jay’s celebration of “value on knowledge of history”, although “he’s disconnected from the everyday world and derives his personal value from the objects he owns”. The puppet, on the other hand, is “grounded”, according to its creator, “but he lacks a moral compass or ‘long view’ and is victim to the fleeting tides of cultural trends”.

A clash of intellects has long been a pillar of comedy, from Ottoman-era puppet duo Hacivat and Karagöz to Shakespeare’s The Comedy of Errors and Hollywood’s Laurel and Hardy. For Musson, however, the push-and-pull between his characters raises questions about the signifiers of value in art.

“Art, much like capitalism, has a way of consuming its opposing forces or divergent practices,” the artist says. “Within that consumption the ‘outside’ becomes ‘in’, so it’s not necessarily about satirising art or its social dynamics but really me playing around trying to figure how something can become art.”

A satirical assessment of the canon has long been a motif in Musson’s work. The artist had his breakthrough over a decade ago with his YouTube video series ART THOUGHTZ, in which he assumed the role of the derisive Coogi sweater-donning character Hennessy Youngman, delivering his takes on Spiral Jetty, Damien Hirst or Structuralism. “A deconstruction of critical theory because what else would a grad student make,” Musson says of that series, which he created while attending the Skowhegan School of Painting and Sculpture.

Musson thinks the sitcom genre, similar to YouTube back then, is somewhat devoid of a “hierarchal weight within the art world labyrinth of meaning”, which gives him space to articulate his takes on art history and invite the audience to contemplate his protagonists’ debate.