Crypto crash or burn? Damien Hirst to set his paintings on fire for NFT project 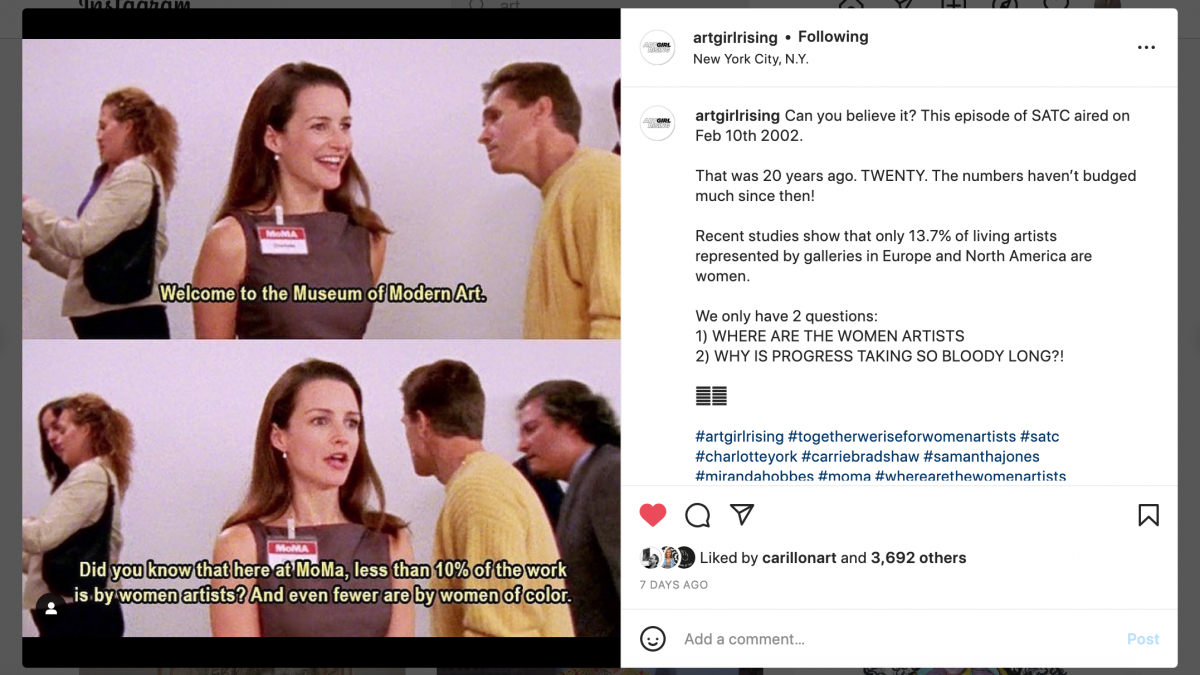 Idly scrolling through Instagram, I pause when I see Sex and the City’s Charlotte circa-2002 beaming out at me. “Welcome to the Museum of Modern Art,” she declares in the caption, “Did you know that here at MoMA, less than 10% of the work is by women artists? And even fewer are by women of colour?” As I try to remember her chipper voice delivering this startling fact, I scroll to the accompanying text from Art Girl Rising, an activist organisation that fights for women’s representation in the art world. About Charlotte’s 2002 factoid, the text tells me: “That was 20 years ago. TWENTY. The numbers haven’t budged much since then!” I find myself staring, lost in worried thought. Have things really not changed in 20 years? Or, rather, am I actually surprised?

Sadly, Charlotte never did boldly announce gender disparity in the middle of MoMA, in real life or on TV. Art Girl Rising simply used the familiar pop culture reference to capture the attention of Instagram users like myself and point us towards a very real, ongoing issue.

Upsettingly, the idea that, in 2002, 10% of MoMA’s collection was by women seems generous when in 2004’s re-hang of the permanent collection (with works spanning from 1879-1969), that number was closer to 5%. Jerry Saltz’s 2007 article Where Are All The Women? for New York magazine noted that the re-hang exhibited only 20 works by women out of 415 in 2004, and 19 out of 399 in 2006. Twelve years later, MoMA’s formerly abysmal representation of women rose to 23%— or 336 of 1,443 exhibited works. Apparent progress but still a deep divide, one that the art historian Maura Reilly described as “tokenism”. For ARTnews, Reilly framed the massive 2019 re-hang as both exciting but disappointing — the central characters continued to be the white men of always, with women and artists of colour in supporting roles.

That same year, an Artnet report found persistent disparity, despite years of virtue signalling and promises by institutions; it shocked even the curators who it surveyed. The report showed that women comprised only 11% of all acquisitions and 14% of exhibitions at 26 major US museums between 2009-19. Other reports have found that women’s art sells for 50% less than men’s, and though women make up 15% of the NFT market they only account for 5% of sales. The National Museum of Women in the Arts reports that the top 18 US museums’ collections are 87% male and 85% white, as of 2018. Artnet’s Julia Halperin summed it up neatly: “The perception of change was more than the reality.”

Art Girl Rising, which posted the meme, fights the imbalance with informative campaigns and their “Where Are The Women Artists” database. The work that they, and a few other groups, do to gather and share data is crucial to making artists aware of the disparity facing us. While it feels slightly embarrassing to learn basic facts about art history from memes, perhaps it is more subversive than it seems. Thirty-five years ago the Guerrilla Girls took to the streets with posters and wit; while the tools have changed, the need continues. Fact-obscuring virtue signalling by institutions won’t hold up to the creativity of artists with a message.