‘The goal of every artist is to express what they see’: Legally blind painter and Star Trek actor Bruce Horak on abstracting the unseen 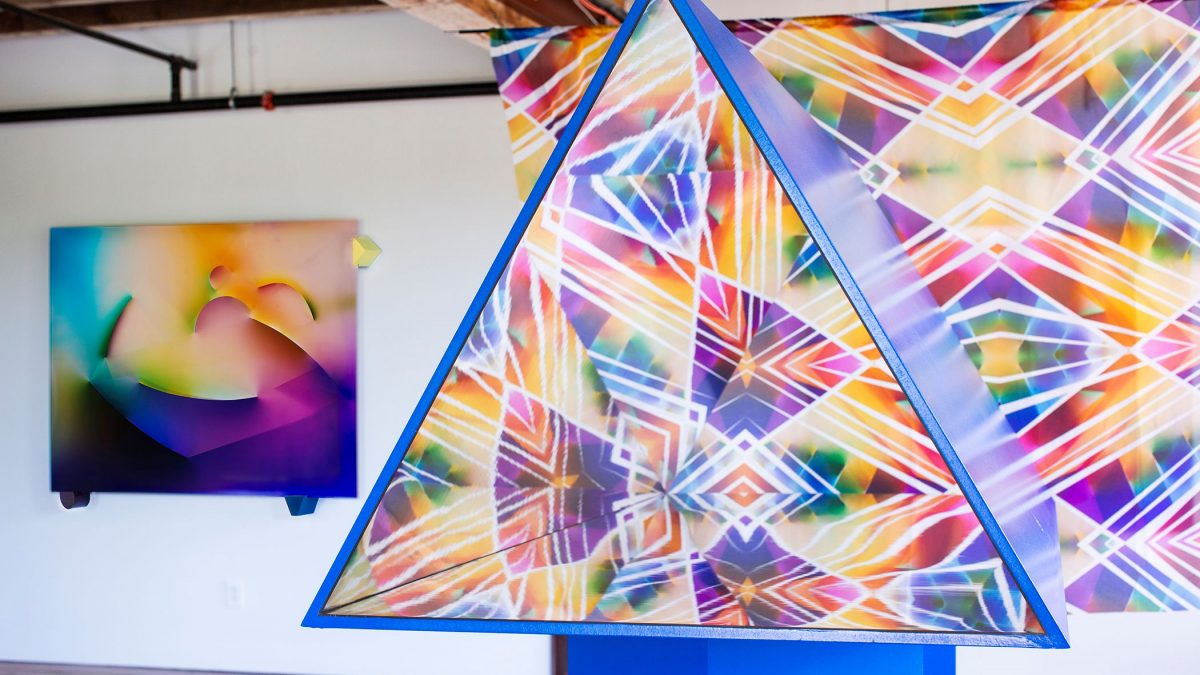 Upstate Art Weekend (22-24 July) returns this year with nearly 150 exhibitions, open studios and events on view throughout the Hudson Valley. The event, which was founded by the curator Helen Toomer, the co-founder of the upstate artist residency centre Stoneleaf Retreat, was launched with 23 participants in 2020, growing exponentially since then. The full 2022 line-up expectedly includes major destinations like the Storm King Art Center and Dia Beacon, which are both offering special opening hours this weekend, as well as commercial galleries, non-profit and pop-up spaces. Here are our picks of some of the exhibitions on view this weekend:

Foreland, the newly inaugurated contemporary art campus in the Hudson Valley founded by the artist Stef Halmos, has opened its 85,000 sq ft. waterfront building with exhibitions from four separate galleries. Document from Chicago has organised a group show of abstract photographs and sculptures; the Hudson-based Jag Projects presents a group exhibitions of abstract paintings; the New York-based Situations has assembled kaleidoscopic prints by the artist Natalja Kent; and New Discretions, also New York-based, is showing historic works by the German sculptor Hans Bellmer in dialogue with the work of contemporary artists. This weekend (23 July) the centre will host a party in collaboration with the New Art Dealers Alliance featuring music by the artists Tschabalala Self and Mike Mosby. Foreland comprises three restored buildings dating from the 1800s and features more than 30 artist studios, commercial spaces, special project spaces and a sleek glass bridge. The campus will host a dynamic series of programming in the coming months.

Until 25 July at the Elijah Wheat Showroom, 197 Front Street, Newburgh

The artist-run space Elijah Wheat Showroom is hosting a site-specific exhibition of works by the Newburgh-based sculptor and performance artist Ian McMahon, who explores themes of transience and temporality in his work. The titular centrepiece of the exhibition is an undulating plaster cast theater curtain that engulfs the 3,000 sq. ft warehouse, weighing nearly 2,000 pounds and measuring 44 ft across. The work was installed last month and will collapse onto the space’s concrete floor for a performance that closes the exhibition on 24 July at 7pm. McMahon was born in Ithaca, New York, and received his BFA in ceramics from Alfred University. The gallery was founded in 2015 by the curator and writer Carolina Wheat and the artist Liz Nielsen, and operated as a space in Bushwick between 2016-2020. The Dutch Reformed Church at 134 Grand Street is also hosting a work by Nielsen titled Forcefield, in which a light composition by the lighting collective Nitemind will be projected onto the historic building from 8pm-midnight until September.

Until 24 July at JDJ the Ice House, 17 Mandalay Drive, Garrison

The New York-based artist Athena LaTocha is celebrated for her multimedia works, ranging from sculpture and painting to immersive soundscapes, which deal with the Anthropocene and our connection to the earth. In this exhibition comprising three new works, the artist amalgamates sheets of lead hand-molded from the outline of rocks in the region with ink, resin-coated paper and other organic and synthetic materials to create voluminous abstract compositions that resemble ravaged landscapes. The works symbolically preserve stories of the landscape surrounding the gallery that have been long forgotten; LaTocha notes that the area, which is close to the Hudson River, was an important location for both the Munsee Lenape tribe, early European colonisers and the US military during the Revolutionary War. LaTocha’s work was a highlight of the Greater New York 2021 exhibition at MoMA PS1, and previously in an acclaimed exhibition at the BRIC in Brooklyn, in which the installation In the Wake Of… (2021) magnified her work, creating a piece that spanned 55 ft across and featured a sonic component that disrupted the space with city sounds.

Basilica Hudson, the arts centre and event space housed in a hulking 19th century factory near the banks of the Hudson River, is showing off its newly renovated gallery building with this group show curated by New York-based curator Jessica Wallen and focused on artists specialising in the handmade and handcrafted. Through their work, wood sculptor Sean Desiree, avant-garde mason Alison McNulty, conceptual landscape artist Bob Braine, and installation artist and poet Leslie Reed reinterpret processes associated with craft to address issues of sustainability and conservation. Appropriately, the exhibition will be accompanied by a series of public programmes centering hands-on skills.

Former Lower East Side dealer Kristen Dodge, who had previously operated a space in Hudson, inaugurates her new digs in Kinderhook with a pair of solo exhibitions. My flaws are my pets by Reginald Madison showcases the Hudson-based painter’s canvases, which by turns evoke the cartoon-inflected figures of Philip Guston and the elaborate symbolism of David Wojnarowicz. Meanwhile, Odessa Straub’s Real-Puss Molting Center features the Brooklyn-based sculptor, painter and installation artist’s brightly colourful compositions and intricate assemblage works, which transform domestic objects into otherworldly contraptions.

The Upstate-based artist Rachel Owens has numerous times brought her earthy sculptures to open fields, from Socrates Sculpture Park to the Berkshire Botanical Garden. Yet, given that she primarily works with wood, which she collects around upstate, a show in the region of Owens’s source material is the perfect full cycle. The show features hefty sculptures and works on paper, each imbued with bold shades of the mother earth—but yet a little off. The subversion in fact stems from our own hands, the hubris-fueled human destruction of the flora and fauna. Owens implements broken glass, resin, charcoal or paint to wood that comes from two ash trees she had to fell from her land to their decay. “The stumps are important reminders, headstones of a sort,” the artist says. Owens left New York City for the countryside in 2020, where nature breathed her presence to the artist’s practice. But she does not consider her practice a collaboration with nature, “because weather and the turning of the planet around the sun doesn’t change”, she says. “Nature is setting the parameters—it’s like gardening which I also like to do.”

Vanessa German and Zoë Buckman: We Flew Over The Wild Winds of Wild Fires

Matriarchal energy could nowhere be more suiting than a gallery named Mother. Paola Oxoa’s gallery, which she originated in its current home in Beacon and later flourished into a Tribeca outpost, hosts a dual show with Vanessa German and Zoë Buckman. A total of 19 works are exhibited on pedestals or walls weave together the shared threads in two artists’ practices—resilience in vulnerability, multitudes in autonomy and a holistic assumption of advocacy—through the very immediate acts sewing, stitching and assembling. German’s mixed media sculpture The Hammer (2021) is an in-your-face construction of softness against rampage, an invitation to the warmth of bed sheets against the breeziness of the hammer’s metal head. A mummy-like figure is wrapped in pure white sheets, clutching a cloud of white pearls on one hand and their red sisters on the other. Red, however, also bursts with thin drapes of more pearls, gushing down from her hand with an undeniable resemblance to blood. Rendition of demise, perhaps, has to do with the hammer erected on top of the figure in lieu of a head. A similar sanguine hue dresses Buckman’s un-mesh the mistake that you left (2021), a combination of boxing gloves, gingham placemats and a chain. The tension between warm domesticity and bone-chilling machinery—here carrying German’s bedroom fabric to that of the kitchen and the battering tool to machinery—is kinetic and celebratory, alarming as much as soothing.