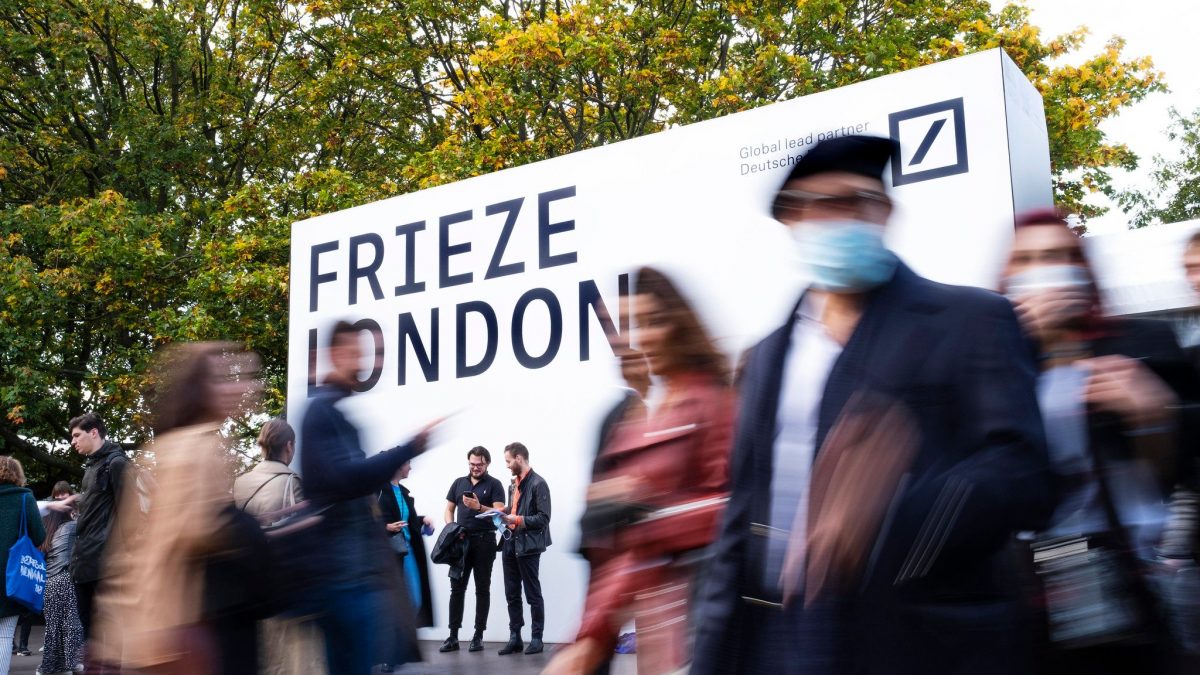 The UK’s premier contemporary art fair Frieze London has announced the galleries for its 19th edition this year (12-16 October). This will be its first event since all Covid-19 measures were lifted by the British government.

On the surface, not much has changed compared to previous years: 162 international galleries including Carlos/Ishikawa, David Kordansky and Max Hetlzer will gather in the fair tent at Regent’s Park (for comparison, 159 galleries attended the 2021 edition; 160 in 2019). As per usual, galleries younger than 12 years, like Tiwani Contemporary and Emalin, will stage solo artist presentations in the dedicated Focus section.

Across the park, its sister fair Frieze Masters—dedicated to art made before 1980—will celebrate its 10th edition with 129 exhibitors such as Dr. Jörn Günther Rare Books, Ronchini and Skarstedt. (Full exhibitor lists for both fairs can be found at the bottom of this article).

While this is the first Frieze London since Victoria Siddall stepped down as global director of all Frieze fairs, the event will retain Eva Langret as its head, with her title having changed from artistic director to director. Langret’s role therefore appears similar to last year, except now she will work across “all aspects of the fair”, she says, maintaining many key relationships herself, rather than in tandem with Siddall. Frieze Masters will be led by Nathan Clements-Gillespie, who was appointed as the director last year following two years serving as artistic director.

But outside the fair tent, the sands are ever-shifting. Frieze will have held its inaugural Seoul event a month before (2-5 September). And its main competitor Art Basel will open the first edition of its Paris fair soon after London, adding greater stakes to the mounting rivalry between the UK and French capitals as hubs of the European art trade.

Indeed, the UK art market’s position on the world stage appears to be of key concern to Frieze, with the announcement of the exhibitor list accompanied by a statement from Langret assuring that this year’s fair will not only “celebrate the cultural life of London, but also showcase its global reach” and reflect “the city’s position as an international centre”.

This might be easier said than done, as Brexit continues to complicate international shipping and wreak havoc on the nation’s supply chains. In the last edition of Frieze London—the first since Brexit was effected in January 2020—a number of exhibitors spoke of red tape issues and shipping delays causing last-minute headaches. Langret says Frieze is now discussing October plans with its galleries “to best help them navigate the logistics and understand their needs, so it can continue to advocate on their behalf”.

Meanwhile, the UK’s rising interest rates are projected to increase to 2% by next year, as the Bank of England attempts to curb spending and subdue soaring inflation, which could deter collectors from buying art. Earlier this month, the UK’s inflation rate hit a 40 year high of 9.1%, the highest of all G7 nations, according to the Office for National Statistic. Langret says that Frieze is “sensitive to the pressures that are affecting everyone” and which the art market is “not immune to”. Nonetheless, demand to participate in the fairs “remains strong”, she adds.

Perhaps also doubling down on the UK’s strategic and pivotal place in the global market, this year’s Frieze London will have its specially curated section focus on ideas of interconnectedness, lifted from strands of Buddhist and Hindu philosophy. Indra’s Net will be organised by Sandhini Poddar, an adjunct curator at the Guggenheim Abu Dhabi, and emphasises that “all sentient life is interdependent. Shifts to one atom subtly alter the rest”. Ten galleries will take part including Silverlens from Manila and Saskia Fernando Gallery from Colombo, which will present works by the Sri Lankan activist artist Chandraguptha Thenuwara that comment on the nation’s current political turmoil.

Meanwhile, two curated section will take place at Frieze Masters. The first, organised by Camille Morineau, co-founder and research director of Aware (Archives of Women Artists, Research, and Exhibitions) will be dedicated to 28 women artists born between 1900 and 1951. They include Sonia Balassanian, Wook-Kyung Choi, Nike Davies-Okundaye and Leonor Fini. The other, organised by the director of the Fitzwilliam Museum in Cambridge, Luke Syson, will focus on “global exchange” and challenge hierarchies of functionality and decorativeness in art objects.

The Gallery of Everything, London Sister Gertrude Morgan