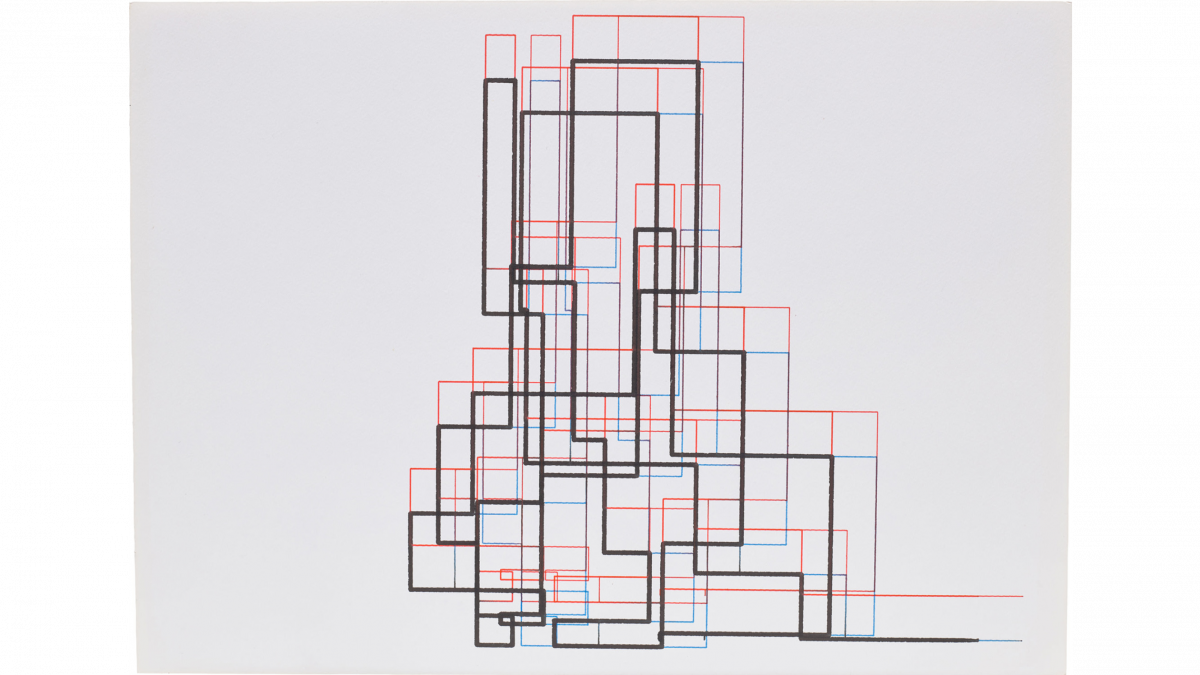 Coined in 1965 by the German philosopher Max Bense, the term generative art describes works based on an algorithmic code or a mathematical formula. Generative art is made through a set of rules that automates the output where there is usually randomness embedded in the algorithm. The process is defined by the artist, and the output is a sort of machine and artist collaboration. Bense taught two of the artists with work in the current Phillips auction Ex-Machina: A History of Generative Art (until 20 July): Frieder Nake and Georg Nees. Originally exhibited in 1965, Nake’s plotter drawings are among the earliest examples of computer art. The auction also includes a late work by Nees from 1986 in which the artist created an AI programme with the computer language Lisp. Bridging between graphics and language, this work shows a virtual mythical room predicting the modern metaverse.

How is generative art curated?

Applying a historical lens to the definition and evolution of generative art is one way to curate it. Another, employed by the NFT platform FxHash requires that all art on its platform use a particular random function within its code. The truth is that while this term has been floating around since 1965, it will also largely be defined by the curators of its present shows, including the Phillip’s auction.

In 2014, before the current explosion of NFTs, the critic David Blazer published a book Curationism: How curating took over the art world. While in this new digital age of the art world galleries jockey with platforms to secure influence, the curator’s role is already firmly established.

In an industry dominated by hype and blowhards, Georg Bak, the curator of Phillip’s auction, is confusingly understated. His depth of knowledge easily classifies him as a geek. He operates via LinkedIn with the job title “digital art advisor” and does not have a Twitter account. Yet, with major projects in Zurich, Miami, London and many metaverses, it is increasingly clear that Bak is one of digital art’s most important curators. As Phillp’s Project lead for digital art, Benjamin Kandler said it in a recent interview: “We asked Georg Bak to curate this auction because we knew he’d bring a historical approach that would establish the true originality and importance of the artists included.”

What is a quintessential example of generative art?

The 2018 Chaos Machine by the artist collective Distributed Gallery is an early example of a blockchain sculpture where the use of randomness and algorithmic code also classifies it as generative art. It looks like a juke-box and exists in two identical copies that are connected through the Ethereum blockchain. When a banknote is inserted into one of the machines, music is played on both from a user-generated playlist, registered on the Ethereum blockchain. The banknote is simultaneously burned. As the banknote is burned, a crypto-token is minted and a QR code is printed that enables the user to add a new song to the Chaos Machine’s playlist.

How are generative art and NFTs connected?

Many of the works in the Phillips auction, particularly the works from the 1960s by Vladimir Bonacic, Gottfried Jäger, Hein Gravenhorst, Georg Nees and Frieder Nake are likely undervalued because the mechanisms of its ownership weren’t in place before NFTs. It wasn’t that digital art couldn’t be owned before NFTs (bitforms gallery has been selling digital art for decades), but the market had not agreed upon the system. So for the last 50 years this work has languished without a market. Now finally it’s for sale.

Why is generative art so important right now?

As we wrestle with the glut of generative NFTs being created today, establishing the history of generative art helps us assign true value. By bringing together historically significant generative art, Bak and Phillips are helping us see what is new as opposed to imitation. This history gives us standing to discern and judge. Like Annette Doms and Alex Estorick, the emerging great curators of digital art are often art historians by training. There is nothing that frustrates these curators more than seeing the art world reward an artist for repeating something done half a century before.

The auction isn’t entirely about historical art, but also the artwork that is building on the early work. It is within this content that the originality of Anne Spalter’s AI generative artwork Unconstructed Dream Space #2: Inner and Outer (2022) shines. This videp is part a day in the studio and part a voyage to outer space as a metaphor to describe the creative process. It uses a text-to-image artificial intelligence process to create the strange compositional effect.

Who is exhibiting generative art?