What is generative art and why does it matter? 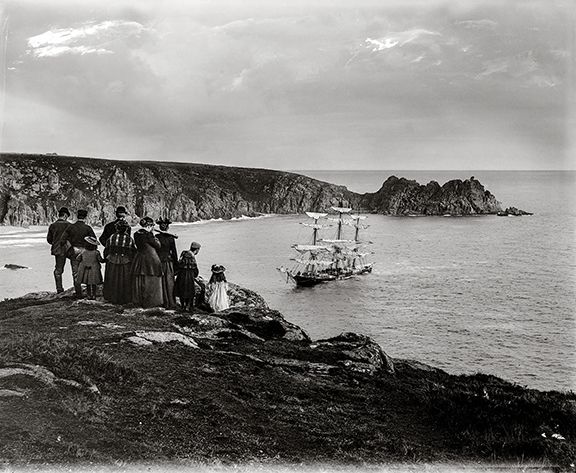 Shipwreck: The Gibsons of Scilly, published by Max Ström in cooperation with the National Maritime Museum, Greenwich, London and the Voice of the Ocean Foundation, is a wonderful book of wonderful photographs, but it is founded on tragedy. The events recalled in these images were all traumatic, sometimes incredibly so. A few of the shipwrecks here involved huge loss of life, but one death or injury would have been terrible for the people concerned. Even where there were no casualties, shipwrecks could be ruinous for crews, owners and those that depended on them. But Shipwreck also includes compelling tales of heroism, care, resilience, and ingenuity among those on board, among those who sought to save them, and among those who dealt with the aftermath.

It could be easy to lose sight of the tragic essence of these photographs because they show so much more than a series of sad events. This volume documents the architecture of maritime industry and commerce in the late 19th and 20th centuries; it offers photo­journalism of seafarers and the communities upon which they accidentally imposed; and it presents a regional tour of atmospheric coastal landscapes and seascapes. The balance of vessels, people and environment varies from composition to composition: the strength of one or other is sometimes fully expressed, sometimes only implied—capturing the contingency of the wrecking process.

The core of the volume comprises black-and-white photographs accompanied by brief text on each of 68 shipwrecks off the notoriously treacherous coast of south-west England: from the ERI lost in 1871, to the Jeanne Gougy lost in 1962. An Index of Ships located towards the back lists all 68 shipwrecks with details of their builders, owners, type, and length. The context and importance of these images is ably set out in a short foreword by Carl Douglas and Björn Hagberg, and in an afterword by Jeremy Mitchell, the senior curator at the National Maritime Museum, Greenwich.

As they explain, the photographs in the book have been selected from the Gibsons of Scilly Shipwreck Collection, acquired by the National Maritime Museum from the Gibson family in 2013. Starting in 1870, five generations of Gibsons ran photographic businesses on the island of St Mary’s in the Isles of Scilly, as well as in Penzance, Cornwall. The founder, Irish-born John Gibson, had been a seafarer from the age of 12, but started a photographic business later in life as an extension to being a grocer.

Crucially, in 1870 the first telegraph cable was installed between the Isles of Scilly and the British mainland “putting islanders in immediate contact with the outside world”, and John became the editor of a small local newspaper. Photographing shipwrecks was just one aspect of the family’s activities: the first business had commenced as a portrait studio. Yet, based on significant local and national as well as family interest for such events—some of their images were printed in the Illustrated London News and The Graphic—as well as the rise in tourism and souvenirs, it resulted in an archive of over 1,800 negatives of more than 200 ships that the National Maritime Museum has cleaned, conserved, digitised and catalogued.

From sail to steam

The wrecks photographed are predominantly sailing and steam cargo vessels, capturing the transition from one to the other. They encompass ships large and small, with their visual impact all the greater for showing whole hulls exposed on the rocks. Most of the photographs show wrecks on the coast of Cornwall and Scilly, with a handful further east. Their stories, however, encompass the seven seas, from the coal trade between South Wales and France to intercontinental voyages interrupted by this jutting coast. Very few of these types of vessel survived into preservation; they are to be seen now only on the seabed, and in these powerful images.

Most of the photographs were taken using large format cameras with glass plate negatives. The impact and quality of the original images is strikingly conveyed by the large format of this book, in landscape orientation with a page size around 240mm × 315mm. The principal image of each shipwreck typically covers a whole page with no margin, and sometimes extends onto the facing page, so the detail is superb. In the Afterword, Jeremy Mitchell notes how the Gibsons enhanced their negatives with pencil and masking fluid, though the effects are mostly too subtle to notice. In some cases, long exposures blur the sea, but even this adds to, rather than detracts from, the scene presented.

Reflecting the different circumstances of each case, sea conditions in the photographs range from benign to tumultuous: a further reminder that it is far better to experience shipwreck through this evocative book than in real life.

• Antony Firth is an archaeologist specialising in marine heritage, coastal and inland waters and is the head of marine heritage strategy at Historic England