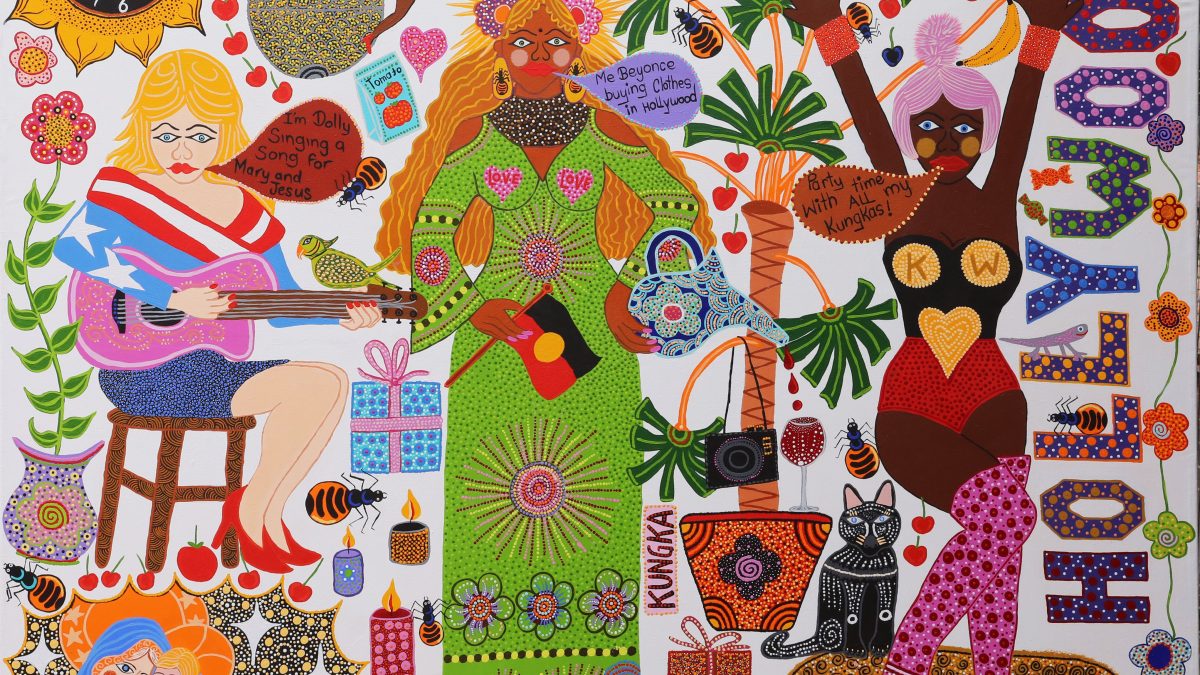 Music plays and lunch is served daily at the Iwantja Arts community in South Australia’s remote Aboriginal desert country of Indulkana. Dogs and children roam around 30 artists working collectively in an open studio format. The members, aged between 18 and 90, speak various languages, but they all practice a form of art, from traditional dot painting to fiber arts, film and figuration on linen. With a population around 300 mainly Yankunytjatjara people, culture is the community’s connecting tissue, especially given that the nearest town—Alice Springs, where the number of residents don’t exceed 30,000—is a five-hour drive away.

When Fort Gansevoort gallery co-founder Adam Shopkorn came across the Iwantja Arts community online, the paintings’ vibrant poignancy made the New York dealer think that there “must be something in the water over there”. After a year-long correspondence spanning two continents, Shopkorn has opened the three-person show Iwantja Rock n Roll at the Meatpacking District gallery with paintings of Vincent Namatjira, Kaylene Whiskey and Tiger Yaltangki. Namatjira had shown at Art Basel in Miami Beach with his Melbourne gallery This Is No Fantasy in 2018, but this is a US debut and the first visit for two other artists.

Each occupying a floor on the Greek Revivalist townhouse, the artists approach poignant issues of colonialism, cultural exchange, power structures and identity through a deeply personal lens. The building’s architecture, however, is not the show’s only Western influence. As the title hints, symbols of rock music find their ways into the paintings both to celebrate the artists’ pure fascination for the genre, but also as markers of a rebellious stance.

Artistic rebellion began sprouting in the Iwantja Arts community around ten years ago. One of the largest of about 30 art communities connected within one hour drive on the Aṉangu Pitjantjatjara Yankunytjatjara (APY) Lands, the center was founded by Aboriginal artists Alec Baker and Sadie Singer around 40 years ago. The main goal then was to pass Indigenous craft techniques across generations; however, a growing number of younger artists have started veering toward figurative painting to discuss social topics with a dash of humour. After learning the region’s established dot painting tradition and watercolour, they now filter their knowledge through a Pop sensibility in favour of social commentary.

Namatjira grew up hearing the lauded stories of his great-grandfather, Albert Namatjira, whose watercolour landscapes made him one of the most sought-after artists in Australia—so much so that he became the first Aboriginal person to be granted citizenship, in 1957. Albert Namatjira meets Queen Elizabeth II and Prince Philip, Canberra, 1954 (2021) depicts the encounter between Namatjira’s ancestor painter and British royalty during the first official royal tour of Australia by the monarchy. The painting shows the royal couple, looking much older than the age they were in the mid-1950s, with a comical grin on Elizabeth’s face, while the artist shaking her hand alludes to both Namatjiras—the original master and the great-grand son.

Many versions of Queen Elizabeth II—sitting with an ACDC t-shirt-wearing young Namatjira, clutching a rugby ball or alone on the remote Australian desert—appears in Namatjira’s paintings, while various versions of Whiskey herself live in her paintings. From Beyonce to Princes Leia and Wonder Woman, western female icons are embodied in the artist’s likeness in purely flat compositions. Whiskey illustrates her subjects, which also include Dolly Parton, the Statute of Liberty, Cher and Catwoman, in the dot painting manner on white backgrounds where mundane or sacred objects of Indulkana life accompany them.

Whiskey, who has recently collaborated with a fashion line to transfer her paintings onto clothing, grew up flipping through comics and listening to pop music. In 2018, she won the Art Gallery of New South Wales’s Sir John Sulman Prize and signed with Sydney’s Roslyn Oxley9 Gallery.

For Namatjira, who received the Medal of the Order of Australia and became the first Indigenous artist to receive the Archibald Prize in 2020, art was always “in his blood”. He adds: “The wit in depicting a real figure with humor has eventually found me.”