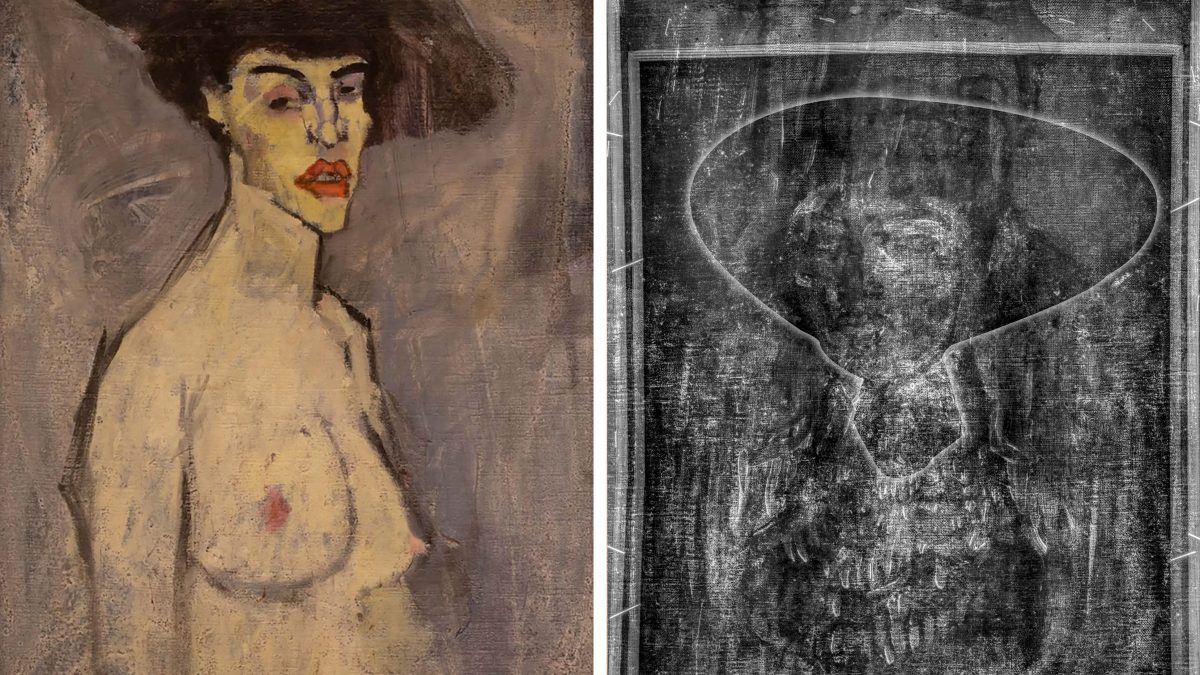 Three previously unknown sketches by the celebrated Jewish-Italian artist Amedeo Modigliani have been discovered under a painting of his housed in an Israeli museum.

Curators at the University of Haifa’s Hecht Museum found the works hidden beneath the surface of the artist’s 1908 painting Nude with a Hat while using X-rays to look more closely at a concealed figure revealed in 2010. The figure was first seen on the reverse of the nude, where a portrait of Modigliani’s friend, Maud Abrantés, is depicted. This year, amid attempts to bring that figure into focus, curators noticed two more silhouettes: one of a man and the other of a woman with her hair pulled up in a bun.

Inna Berkowits, an art historian at the museum, described the canvas—which now features five Modigliani figures—as “a sketchbook on a canvas” reflecting the artist’s “never-ending search for artistic expression”.

The figures represented are atypical from what contemporary viewers may consider an archetypal Modigliani; missing are the elongated necks and ultra-lithe limbs. Instead, they display his earlier, less-developed style—few examples of which in fact survive.

The work is set to go on view this autumn at the Barnes Foundation in Philadelphia in the exhibition Modigliani Up Close (16 October 2022-29 January 2023), for which the forensic analysis was conducted in the first place.

Another example of Modigliani repurposing a canvas was discovered in 2018 at the Tate when the curatorial team in London discovered a portrait of the Bohemian writer and literary critic Beatrice Hastings, who was also the artist’s former muse and lover. While it has been proposed that Modigliani painted over Hastings’s portrait to mark the end of their tumultuous relationship, hypotheses surrounding the Hecht Museum painting’s figures are largely focused on Modigliani’s need to save money on canvas early in his career.

Forensic analysis on Modiglianis has been important for the artist’s soaring market and place in art history, especially as his paintings are said to be among the most frequently forged. Berkowits says she has “no doubt at all” about the authenticity of the museum’s recent discoveries.