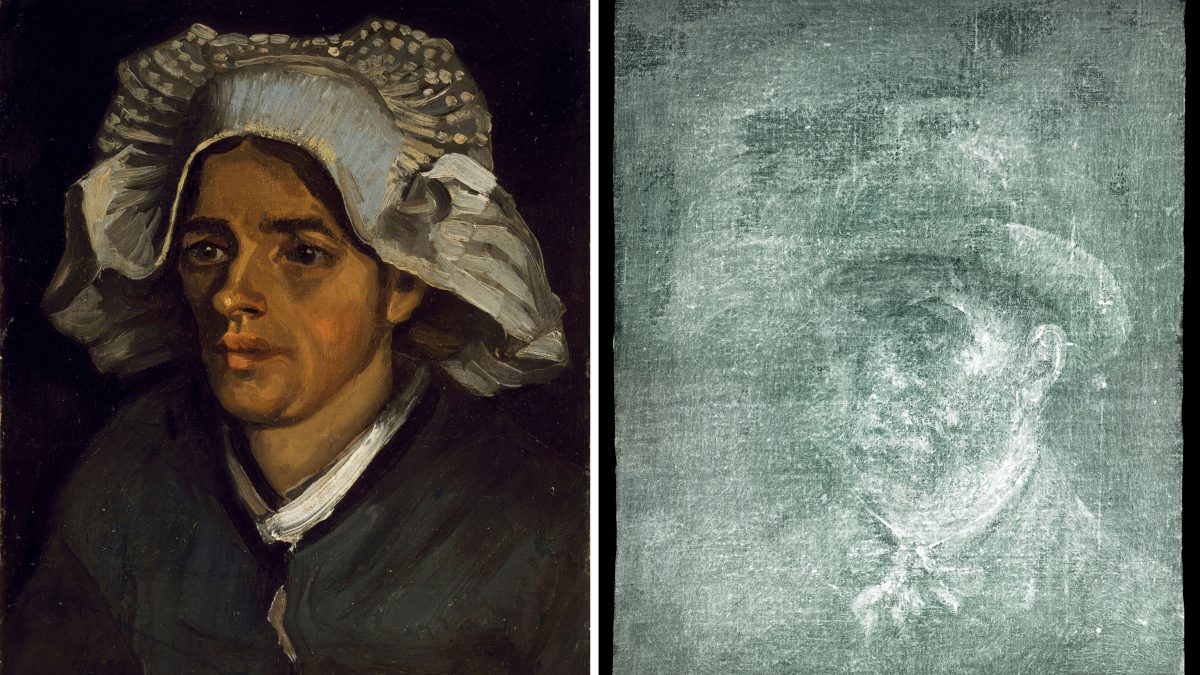 A Van Gogh self-portrait has been discovered on the reverse of a painting at the National Galleries of Scotland. The ghostly image of the artist was found when Head of a Peasant Woman (1885) was recently x-rayed.

A spokesman for the Edinburgh gallery says that the hidden image “is almost certainly a previously unknown self-portrait by Vincent van Gogh”. The x-ray will be displayed in a lightbox in the forthcoming exhibition A Taste for Impressionism (30 July-13 November).

Van Gogh sometimes reused canvases, to save money, and this is what almost certainly happened with this work. Two years after completing the peasant woman, he turned the canvas over, using the reverse for a self-portrait.

Although the x-ray image is not entirely clear, the artist appears bearded, wearing a brimmed hat and a cravat or neckerchief, with the right side of his face in shadow. The pose is similar to that of many of his self-portraits painted in Paris. The sitter’s intense stare is further evidence that it is a self-portrait.

Although the gallery has not dated the self-portrait, it was most likely painted in 1887, quite possibly in the summer.

The self-portrait was probably lost in 1905, when Head of a Peasant Woman was lent by Vincent’s sister-in-law Jo Bonger to a major exhibition in Amsterdam. It seems that the fragile canvas was glued onto cardboard to make it more secure, prior to framing.

At this point the portrait of the peasant woman was considered the more important of the two pictures. Painted in March or April 1885 in Nuenen, the village of Vincent’s parents, it depicts Gordina de Groot. The villagers accused Vincent of having an affair with her, although he denied this. De Groot is one of the characters who appear in Van Gogh’s early masterpiece, The Potato-Eaters (April-May 1885), done just a few weeks after the Edinburgh portrait.

Head of a Peasant Woman was acquired by one of the early UK collectors of Van Gogh, Evelyn Fleming, who bought it with the encouragement of the artist Augustus John, whose mistress she was at one time. One of the children she had with her late husband was Ian Fleming, the James Bond author.

In 1951 the peasant woman painting was bought by the Edinburgh lawyer Alexander Maitland, who donated it to the National Galleries of Scotland in 1960.

The intriguing question is whether the self-portrait can be recovered. Conservators are now examining whether the cardboard and glue could be safely removed, without damaging the Head of a Peasant Woman. This would require delicate work, but hopefully it will be possible. But it is not yet clear what condition the self-portrait would be in.

The Edinburgh painting is not Van Gogh’s only double-sided painting with reused canvas. In 1929 the Dutch conservator Jan Cornelius Traas removed cardboard backing from three Nuenen paintings, revealing hidden portraits on the reverse. And we can report that it has long been suspected that there could be something on the hidden side of Head of a Peasant Woman.

Frances Fowle, the curator of French art at the National Galleries of Scotland, says: “Moments like this are incredibly rare. We have discovered an unknown work by Van Gogh. What a gift for Scotland.”

• Martin Bailey writes the blog Adventures with Van Gogh for The Art Newspaper, which will resume in September after the summer break.