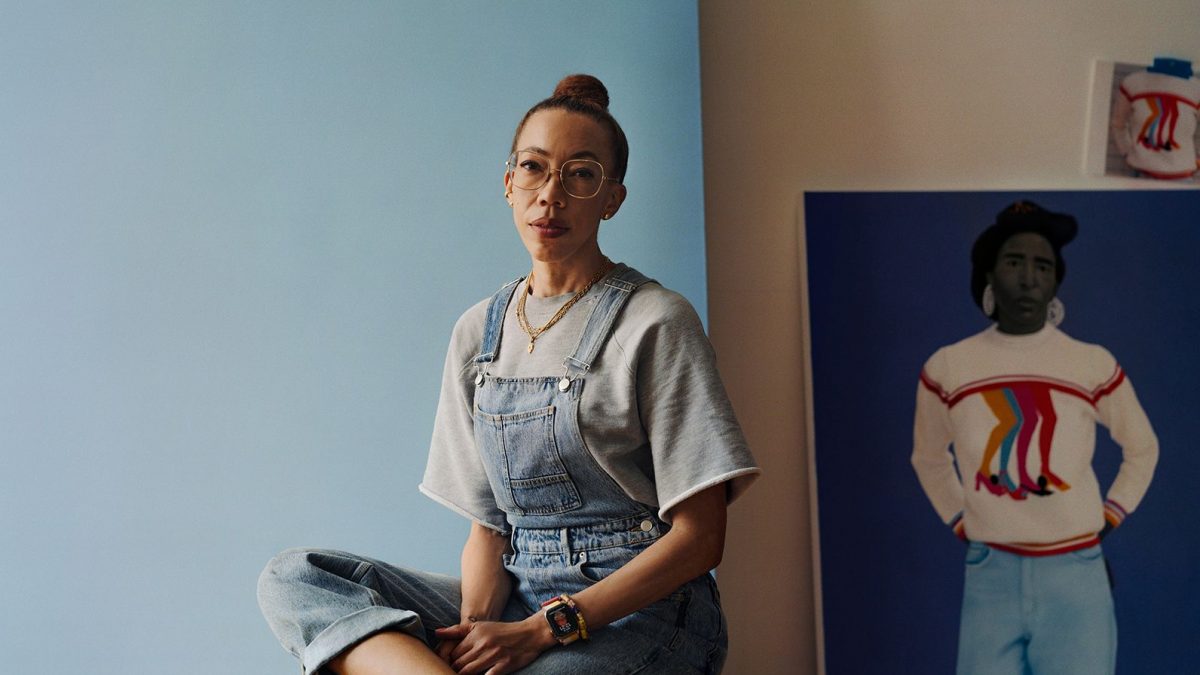 The American painter Amy Sherald, whose genre-subverting portraits of Black sitters have made her one of this generation’s most recognisable and commercially successful artists, will have a solo show at Hauser & Wirth in London this October.

The World We Make (12 October-23 December) will be Sherald’s first exhibition in Europe, as well as her largest to date at Hauser & Wirth. It will take place across the gallery’s two neighbouring Savile Row spaces, with paintings ranging in size from small to “monumental”. A gallery spokesperson declined to give a price range for the works in the exhibition.

As well as her depictions of high-profile figures such as Michelle Obama and Breonna Taylor, Sherald is known for portraying regular Black Americans at leisure, set against monochrome backgrounds that divorce them of context, time and place. In doing so, the artist addresses how the tradition of portraiture has historically been used to erase certain groups of people from art history.

The forthcoming exhibition will continue this practice, while making even more apparent Sherald’s confrontation of the Western canon through a number of allusions to famous historic works. These include a man riding a motorcycle angled up in the air, in a pose similar to that of Napoleon Bonaparte on horseback as depicted in the 1801 painting Napoleon Crossing the Alps by Jacques-Louis David. In another work, a child stands atop a slide with his back to the viewer, mimicking a pose associated with Caspar David Friederich’s Wanderer above the Sea of Fog (1818).

“As an artist, I employ certain motifs to provoke the insights of my audience,” Sherald tells The Art Newspaper. “The Caspar David Friedrich reference is one possible interpretation in a canonical framing. Sharing these paintings in Europe is an opportunity for me to reflect on how the tradition of portraiture finds continuity as one of several lineages alive in my work.”

Notably, many of these poses are more stylised and dramatic than one typically associates with Sherald, who is known for her paintings that explore the quotidian and ordinary aspects of Black life to challenge notions of the Black American experience as extraordinary or inherently traumatic.

Questioned about this stylistic depature, Sherald says: “What might seem exaggerated or staged is mainly a way of capturing a singular moment in time, to explore the possibilities within that moment and the potential of what I allude to in the show’s title, The World We Make.”

Sherald also broaches ideas around the performance of masculinity, a key theme within the exhibition, she says. One of the most probing examples of this is the painting For love, and for country. It recreates the famous photograph V-J Day in Times Square by Alfred Eisenstaedt that portrays a US Navy sailor kissing a woman in New York City’s Times Square on 14 August 1945 as Imperial Japan surrendered in the Second World War. Now, the scene has been recreated with two Black figures—both presumably male—joining in a similar embrace.

“I was thinking about the history behind the photograph and the Black soldiers who returned from the war shortly after, and what it would mean to broach the iconic pose through another understanding of masculinity,” Sherald says. “I consider the painting a furtherance of my interest in American culture and an expression of those stories once left out from the dominant historical narratives.”

Despite just five works by Sherald having ever come to auction, her secondary market has attracted significant scrutiny due to the artist’s high prices and her outspoken views on resale rights. Sherald’s auction record was set in December 2020 at $4.2m (with fees) for The Bathers (2015) at Phillips New York. More recently, her 2012 painting Welfare Queen sold for $3.9m, prompting Sherald to publish a statement in Culture Type:

“Despite its common occurrence, it can feel personal when a painting is put up for auction by a collector. Especially, in this case, when it’s someone you know and worked with to accommodate an alternative payment arrangement to acquire the piece in the first place. It is every artist’s hope that collectors will do the right thing by the work and for the artist by leveraging the gallery to assist in placing the work,” Sherald wrote of the work’s sale.

But Sherald has been able to leverage these prices for good too: The artist recently donated $1m to fund the Breonna Taylor Legacy Fellowship and the Breonna Taylor Legacy Scholarship for undergraduates at the University of Louisville. This gift was made possible by the sale of her 2020 portrait of Taylor to The Speed Art Museum and the Smithsonian Institution’s National Museum of African American History and Culture through the Ford Foundation and the Hearthland Foundation.

The London show will be accompanied by the release of the first substantial monograph of Sherald’s work (£52; Hauser & Wirth Publishers), with essays by the academics Jenni Sorkin, Kevin Quashie and an artist interview with the author Ta-Nehisi Coates. A much shorter catalogue was published in 2019 to coincide with Sherald’s first institutional show in 2019 at the Contemporary Art Museum in St. Louis.