Auction houses say the art market is booming. But what lurks beneath these shiny numbers? 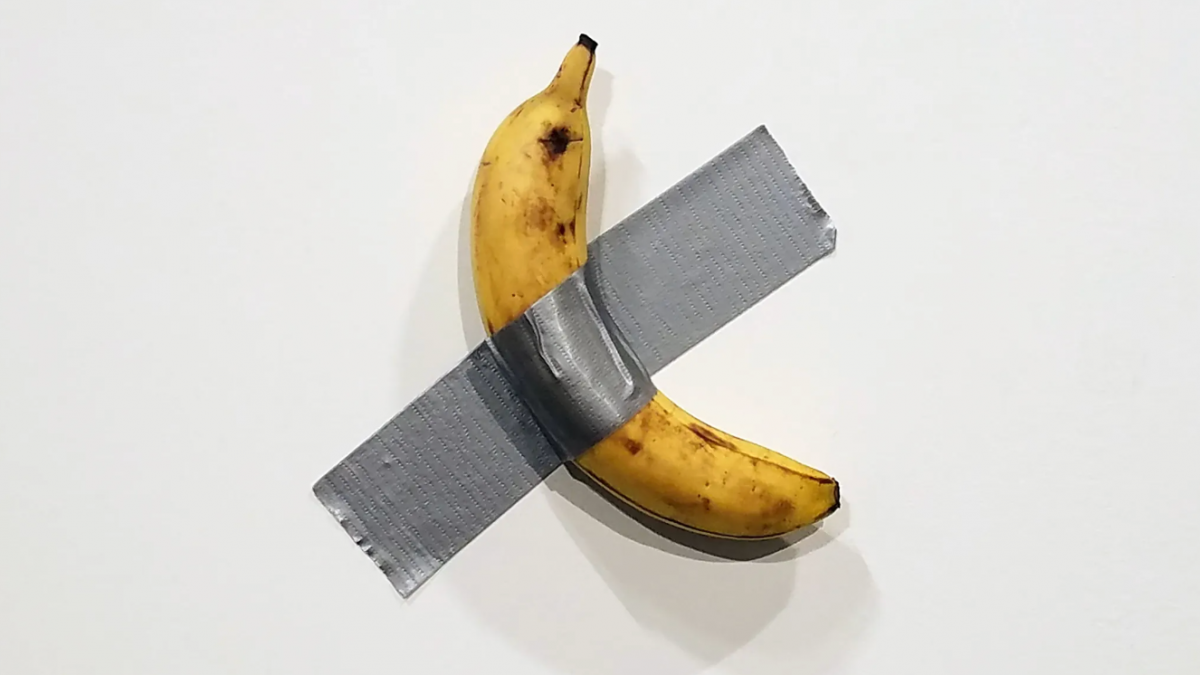 The court denied Cattelan’s motion to dismiss the litigation brought by the US artist Joe Morford alleging that Cattelan’s Comedian infringes the copyright of his own work, Banana & Orange. “Morford may be able to claim some degree of copyright protection in the ‘selection, coordination, [and] arrangement’ of these otherwise unprotectable elements,” said the United States District Judge Robert N. Scola Jr. in his ruling.

In Miami, Comedianturned into a viral hit. The piece “offers insight [into] how we assign worth and what kind of objects we value”, according to a statement from Perrotin gallery, which showed the found object assemblage. The Duchampian gesture divided critics and commentators (the banana was eventually eaten by the performance artist David Datuna).

Court documents show two images provided by Morford, who claims that Cattelan “plagiarised and copied” Banana & Orange. Morford’s work consists of two pieces: an orange attached to the wall with tape and a separate work showing a banana affixed to the wall.

Scola says in the ruling: “The question of whether a banana taped to a wall can be art is more a metaphysical question than a legal one. But the legal question before the court may be just as difficult—did Morford sufficiently allege that Cattelan’s banana infringes his banana?”

In 2000, Morford says that he registered his work Banana & Orange with the US Copyright Office. “While Morford does not allege how widely this work was disseminated, it appears that Banana & Orange was accessible on Morford’s website, as well as through the social media platforms Facebook and YouTube.”

Morford argues that Banana & Orange has been available on YouTube since July 2008 and on Facebook since July 2015. But Cattelan “cites a multitude of cases for the proposition that access cannot be established by mere internet publication”, says the judge.

The court applied the “abstraction-filtration-comparison” test to the case, a method of “identifying substantial similarity”. In a highly technical analysis, the judge studied the works by Morford and Cattelan. “In both works, a single piece of silver duct tape runs upward from left to right at an angle, affixing a centered yellow banana, angled downward left to right, against a wall. In both works, the banana and the duct tape intersect at roughly the midpoints of each, although the duct tape is less centered on the banana in Morford’s work than in Comedian,” he says.

The court ultimately “finds, at the [early] motion-to-dismiss stage, that Morford sufficiently alleges that there is similarity in the (few) protected elements of Banana & Orange”. But Cattelan hits back, arguing that the “coordination and arrangement in Banana & Orange is ‘not sufficiently original’ to warrant protection. Copyright protection only extends to arrangements that are unique and original.” He also argues that the presence of “additional elements in Banana & Orange—namely, an orange, the green background, and the use of masking tape borders—weigh against a finding of substantial similarity”.

According to the court papers, Cattelan sold three copies of the work, as well as two proofs, for more than $390,000. In an interview with The Art Newspaper last year, Cattelan said: “To me, Comedian me, was not a joke; it was a sincere commentary and a reflection on what we value. At art fairs, speed and business reign, so I saw it like this: if I had to be at a fair, I could sell a banana like others sell their paintings. I could play within the system, but with my rules.”

Cattelan is represented by Kane Kessler PC and Stroock & Stroock & Lavan LLP (both were contacted for comment). Morford represents himself.