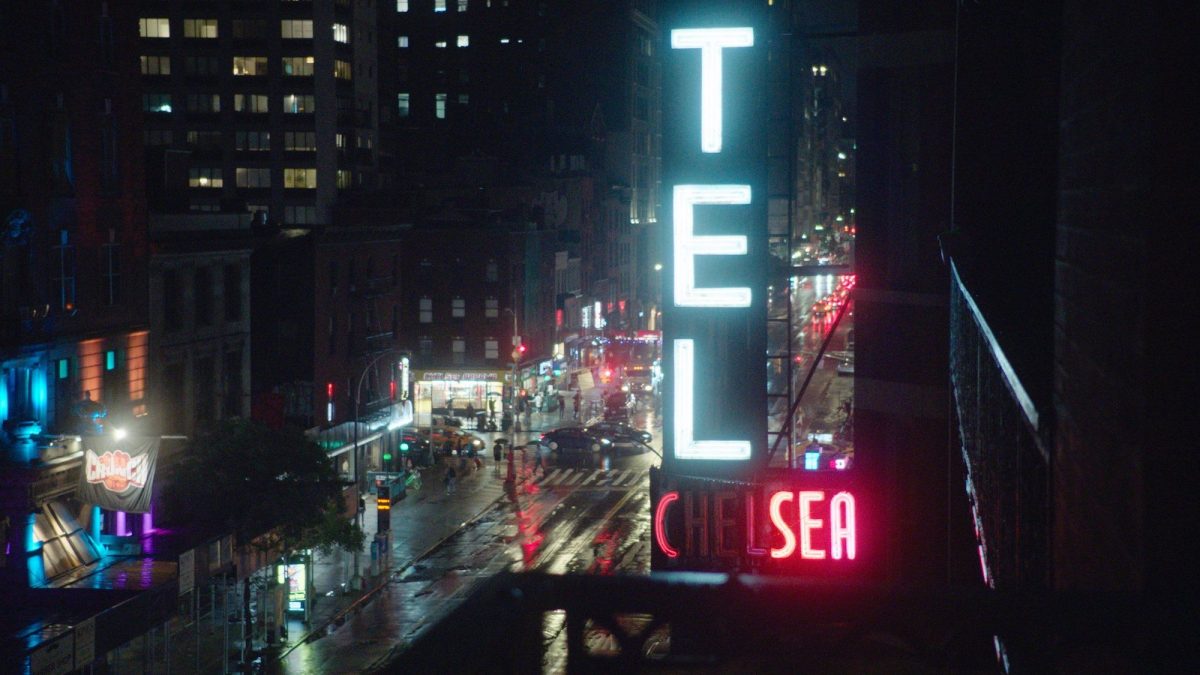 “I’ve always liked to be where the big guys were,” a young Patti Smith tells a 1970s documentary crew on the roof of the Chelsea Hotel in an archival clip from Dreaming Walls. New York’s palimpsestic history of artistic greatness is layered particularly thick in the Chelsea, on West 23rd Street, the subject of Maya Duverdier and Amélie van Elmbt’s new documentary. Smith lived at the hotel because Dylan Thomas had stayed there; now that the scaffolding around the Chelsea has finally come down and it’s reopened as a hotel after a decades-long renovation, many guests are presumably willing to pay rates starting at $300 a night because it’s where Smith once lived with Robert Mapplethorpe.

In Dreaming Walls, shot just before the pandemic, Duverdier and van Elmbtprofile the long-term tenants of the Chelsea living through its seemingly endless renovation. The Belgian directors follow in the footsteps of many European tourists before them, including a number of documentary crews whose archival footage they interweave with the present in a ghostly call-and-response. But, its hagiographic title aside, Dreaming Walls avoids self-cannibalising New York nostalgia. Rather, it’s an impressionistic takeon a subject far more urgent to New York culture, namely, the squeezing-out of a bohemian middle class that contributed to an atmosphere attractive to luxury developers—and, implicitly, an incipient elderly housing crisis.

The Chelsea’s history—William S. Burroughs, Frida Kahlo, Warhol stars, Leonard Cohen, Bob Dylan—is more alluded-to than told straight in Dreaming Walls, since the story is presumably familiar to everyone. (Chelsea Hotel nostalgia is something of a cottage industry. A high school friend of mine’s hippie parents named her Chelsea, like the hotel.) Duverdier and Van Elmbtdraw on footage from multiple documentaries, including a BBC Arena from 1981, in which Larry Rivers belatedly signs a work in the hotel lobby for long-time manager Stanley Bard, who sometimes accepted art in lieu of rent. (Junkies and streetwalkers who used the lower floors could be relied upon to pay cash.) Bard courted artists as tenants and guests through New York’s fall and rise—much of Madonna and Steven Meisel’s book Sex, for instance, was shot in Room 822—but, after the board forced Bard out in 2007, eyeing a sale, the hotel passed from owner to owner for the duration of the 2010s, each new developer driving out rent-stabilised tenants with a newround of retaliatory renovations and evictions before getting bogged down by lawsuits, giving up and selling on.

The filmmakers project footage of art happenings on the wall, traces of history made visible but not tangible: of Niki de Saint Phalle, who lived there while she worked on one of her shooting paintings and several of her Nanas sculptures; from Shirley Clarke’s Tee Pee Video Space Troupevideo diaries, which document happenings from her experimental workshop on the Chelsea roof; and from the Warhol and Jonas Mekas archives. The elderly tenant Merle Lister, a choreographer, haunts the corridors in her walker, chatting up construction workers over the endless clamour of hammers. When she restages her site-specific 1983 piece Dance of the Spiritsin the Chelsea stairwell, Duverdier and Van Elmbtintercut her old video of the piece with new footage of the dancer retracing her steps.

Lister is one of several artists still holding out behind “Tenant Occupied” signs, staying on out of a combination of cussedness and fear. The very frail Bettina Grossman, in her legendarily cluttered apartment with a balcony view that inspired her series of overhead photographs, died last year at age 94 after telling the Dreaming Walls filmmakers that the Chelsea’s new owners never offered her a buyout, presumably having made certain actuarial calculations. Susan Kleinsinger and her ailing husband Joe Corey were brusquely relocated to a lower floor, but still maintain their rent of $317 a month—where else would they, could they go? (Many other aging New Yorkers, artists and otherwise, continue to lack any protections from new landlords following Albany’s failure to pass the Good Cause Eviction bill.)

In contrast are the Pappases, Nico (not the one sings Chelsea Girl on the soundtrack) and Zoe, president of the tenants association, who can’t wait for the renovation to be finished, decry their neighbours’ lawsuits against management over unlivable conditions and tenant harassment, and kid Lister for invoking the spiritual aura of the building. (Though, if a night at the Chelsea is out of your price range, Zoe—an admirer of the hotel’s new “success-oriented management”—is selling a $150 silk scarf inspired by the hotel’s “perpetual creativity”.) When Duverdier and Van Elmbt use the metaphor of dreams to evoke the Chelsea’s creative history, it makes this past seem very far away indeed. Which, of course, it is.