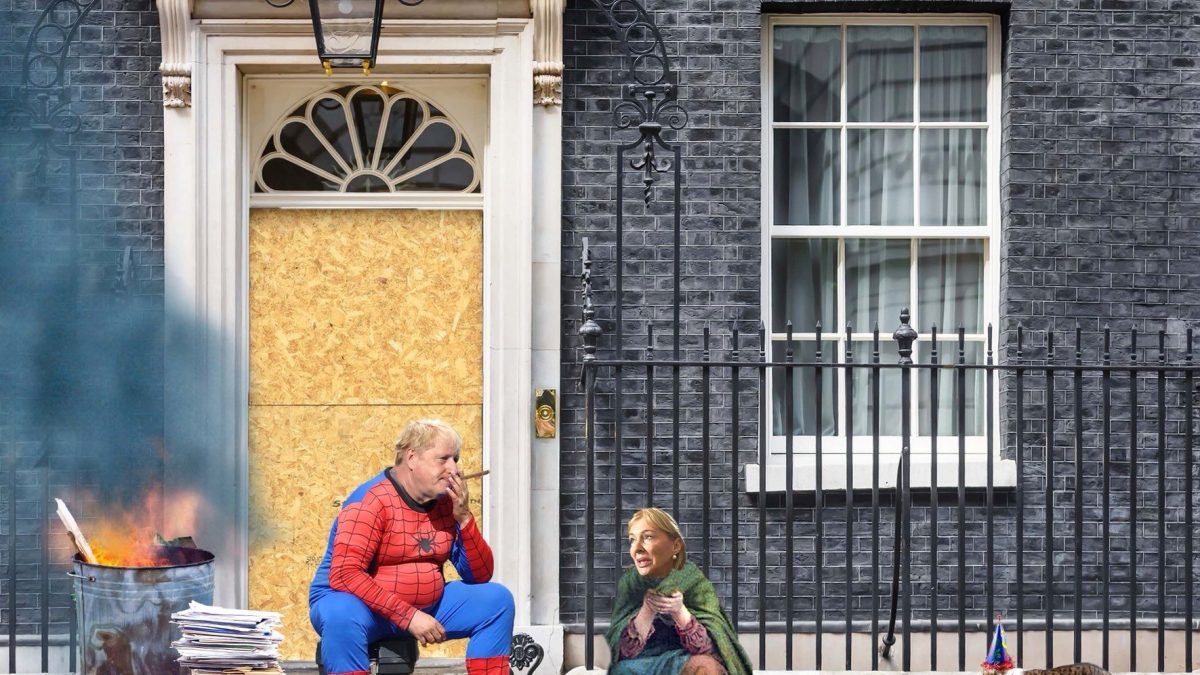 Artists and cultural figures around the UK have been reacting to the news that the British Prime Minister Boris Johnson has resigned as the Conservative Party leader today, effectively ending his reign as prime minister. Johnson is planning on remaining in office until the autumn, as a new leader of the Conservative Party is selected.

The political satirist Cold War Steve, whose DIY collages of politicians have provided a constant commentary of the ups and (mostly) downs of British politics over the past years, tweeted his latest work this morning. It shows Johnson in a spiderman outfit smoking while sitting outside a boarded-up Downing Street, flanked by the culture secretary Nadine Dorries—one of the few Cabinet ministers to have stuck by Johnson—and a burning rubbish bin.

For the culture sector, there remains the pressing issue of whether Dorries—the sixth minister appointed to the role in five years—will remain in post. She took up the position last September, replacing Oliver Dowden who “enthusiastically used his department to wade into Britain’s culture wars, providing eye-catching political cover for a government frequently beset by controversy and chaos”, according to the art historian Bendor Grosvenor.

The former Conservative culture minister Ed Vaizey remains optimistic, telling The Art Newspaper, “Luckily for us whatever happens Stephen Parkinson is likely to remain in the [House of] Lords as arts minister—he is across the brief, well liked and very committed. The big focus will be on the media side of things—online safety, Channel 4 privatisation and so on.” He adds: “The cultural sector can remain calm, and if Nadine [Dorries] stays in post, we can continue to work with her on increasing access.”

The Turner Prize-winning artist Tai Shani is less optimistic about the future. She tweeted yesterday—prior to the official announcement—that “I don’t think BJ [Boris Johnson] gone will make any difference, Tories are all scum but I do think that his humiliation will be pleasurable!” She also reposted a previous tweet of Johnson being spoon-fed an emoji of excrement, captioned: “Bon appétit entitled shit monger—some of your own medicine”.

The British artist David Shrigley, known for the dry humour and irreverence of his illustrations, posted on his Instagram the slightly cryptic: “Dogs Hereby Allowed in Parliament”. (Only assistance dogs are allowed into Parliament, according to its rulebook.) The artist often posts what appear to be oblique references and criticism of current affairs, using his dry sense of humour to gently needle and ridicule. Although sometimes his works are not so subtle.

Other artists expressed their concerns on their Instagram Stories. The sculptor Thomas J. Price, who recently unveiled a sculpture in Hackney, East London, dedicated to the Windrush generation, posted an image of a ghoulish rabbit with the hashtag #clingtopower. In another post, Price says that “the relationship is now over but he won’t move out”.

The London-based artist Adam Dant, who creates intricate and satirical map prints, has posted a series of drawings depicting imaginary scenes inside No. 10 Downing Street in the wake of today’s tumultuous events. A figure resembling Boris Johnson is seen standing on the pavement holding a banner saying Rebel for Life while a love heart saying “Boris + Carrie” is inscribed on a nearby tree.

The fashion photographer Nick Knight was rather enthusiastic about Johnson’s departure, writing “Hooray!!!” on his Instagram account. However, he also called for more action against Johnson and his supporters in government: “And now put this lying, despicable and absolutely corrupt narcissist on trial for the damage he and his sham government have caused this country.” He also called for an overhaul of the political system to “ensure someone so clearly unfit to hold high office never again gets elected. Proportional representation now. Enough of this awful two party system!” (Although the Conservative Party won a large majority at the last election in 2019, more people voted for other parties.)

The British artist Bob and Roberta Smith says that bigger issues are at play beyond one man leaving his post. “It’s not about Boris or his personality, it’s all about the inevitable disappointment that Brexit is impoverishing the UK, magnified by war in Europe,” he tells The Art Newspaper. The artist is also critical of the recent weaponisation of the arts in the so-called culture wars. “The arts are just one of the wedge issues used recklessly by the government to demonise people who don’t think working 24/7 is the be all.” Smith adds, however, that the arts can play a crucial role in dealing with political divides: “We need a period of building bridges and mending relationships… politicians have gained power by dividing people… those of us in the arts know how to create dialogue and heal wounds.”