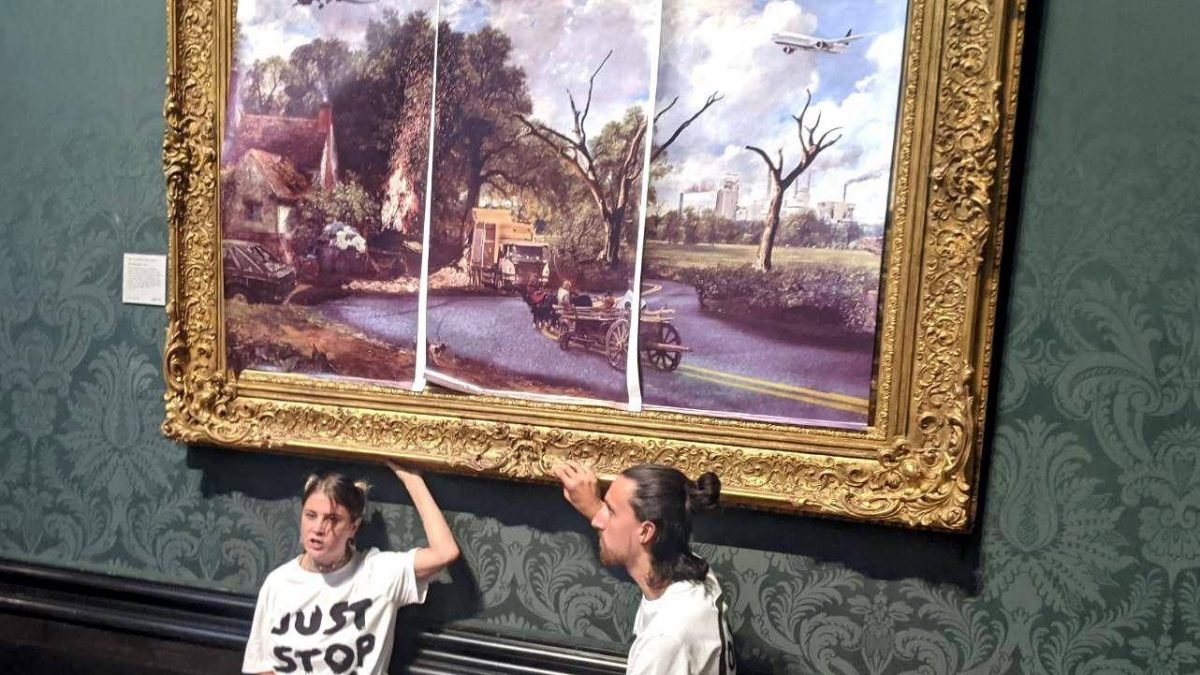 Environmental activists from the group Just Stop Oil glued themselves to the celebrated Constable painting The Hay Wain (1821) yesterday at the National Gallery in London, the latest intervention in a campaign targeting major museums and galleries in the UK. The protestors say they are calling “for the government to end new oil and gas [extraction] and for art institutions to join them in civil resistance”.

The painting was removed and later rehung in Room 34 following an examination by the conservation team. “The Hay Wain suffered minor damage to its frame and there was also some disruption to the surface of the varnish on the painting, both of which have now been successfully dealt with,” says a spokesperson for the National Gallery. “[The protestors] also covered the surface of the painting with three sheets of what appeared to be paper featuring a reimagined version of The Hay Wain.”

Just Stop Oil says in a statement: “The reimagined version carries a nightmare scene that demonstrates how oil will destroy our countryside. The river has gone, to be replaced by a road, airplanes fill the sky, pollution belches from cities on the horizon, trees are scorched by wildfires, an old car is dumped in front of the Mill and the famous Hay Wain cart carries an old washing machine.”

Asked if the group will continue targeting other museums, a spokesperson for Just Stop Oil adds: “We love our history and culture too much to just allow it all to be destroyed by the breakdown of our society. Young people’s future is being burnt in front of their eyes, and it is the government pouring petrol on the flames. Supporters of Just Stop Oil will continue to peacefully disrupt whatever it takes until the government agrees to halt all new fossil fuel projects.”

Last week, demonstrators from the environmental campaign group also targeted the Courtauld Gallery in London. “[On 30 June] two young supporters of Just Stop Oil were arrested at the Courtauld Gallery in London after they glued themselves to the frame of Vincent van Gogh’s Peach Trees in Blossom (1889). Louis McKechnie, 21, from Weymouth in Dorset and Emily Brocklebank, 24, from Leeds were held in custody overnight,” says a Just Stop Oil statement. The painting is now back on display, says a spokesperson.

On the same day, demonstrators in Glasgow attached themselves to the frame of the 19th-century landscape by Horatio McCulloch,My Heart’s In The Highlands, at Kelvingrove Art Gallery and Museum. Tomson’s Aeolian Harp (1809) by J.M.W. Turner was also targeted during a “glueing” protest at Manchester Art Gallery in the same week. Asked if any charges have been brought following the demonstrations, the Just Stop Oil spokesperson says that “it is an evolving picture at the moment”.