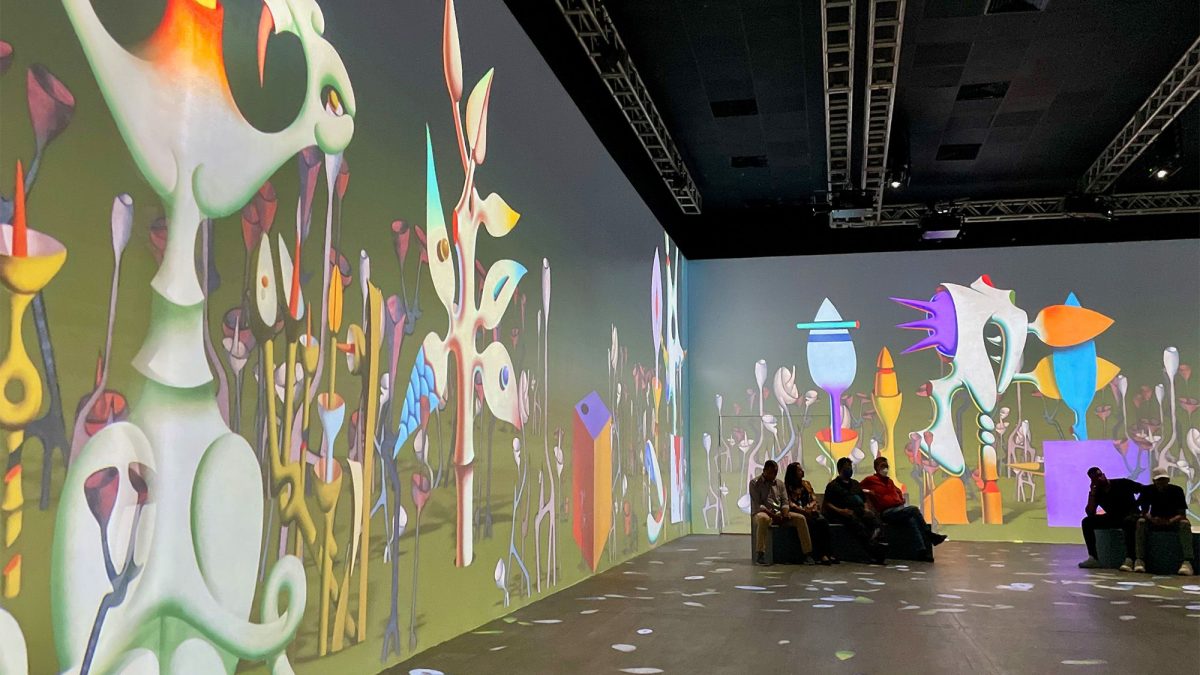 Long lines, stunned faces and many selfie angles—the recent boom of immersive exhibitions dedicated to artists with mammoth celebrity is a seemingly inescapable spectacle. These pop-up affairs surround viewers with the intricately reproduced, blown-up (and sometimes animated) repertoires of masters like Vincent van Gogh or Frida Kahlo, though their contribution to broadening visitors’ understanding of the artist’s life and work is disputable—in most cases, but not all.

An immersive exhibition showcasing around 400 artworks and ephemera by the Dominican painter Ivan Tovar in Santo Domingo proves the possibility of an alternative scenario. Tovar Surrealismo Vivo introduces the diverse practice of the Dominican Republic’s overlooked Surrealist to his homeland inside a 5,920-sq.-ft tent on Plaza de España in the city’s Unesco World Heritage Site neighbourhood, Zona Colonial.

Tovar who died in 2020 at age 78, traveled to Paris in 1968 on a painting scholarship and produced work in the French capital for two decades under the influence of Surrealist pioneers Salvador Dalì and Joan Miró. During his time in Europe, Tovar became the first Dominican painter to show in the Paris Biennale and exhibited his subliminal abstractions in Stockholm, Luxembourg and New York.

Mysteriously sexual and obsessed with the subconsciousness, his paintings today sit mainly in private and public collections in France, Belgium, Chile and the United States, as well as with few prominent Dominican collectors, such as Héctor José Rizek and Gary Nader. Although Tovar moved back to Santo Domingo nearly four decades ago and produced around 1,000 artworks throughout his career, his legacy has remained largely under the radar in his native country.

Rizek, who is affiliated with the Ivan Tovar Foundation, spent two years traveling to each collection of the artist’s work with a photographer to document the pieces in high resolution. The resulting, nearly hour-long show wraps the viewers with an animated display of Tovar’s ambitious painting practice, which imbued geometric forms with bodily energy, intertwined with the limitlessness of dreamscapes. From his own typography accentuated with breasts to fragile architectural structures, the vast projections of Tovar’s visual lexicon engulf visitors within the mind of an artist whose recognition is long overdue.

Tovar is “a hidden treasure who had to wait 53 years to be understood”, Rizek says, referring to the artist’s return to his country after its liberation from Rafael Trujillo’s regime in 1961. “Hopefully, this moment will also lead recognition of other Dominican artists both in their country and abroad.”

The multisensory experience features 32 projectors and is accompanied by two voiceovers underlining the influence of literature on Tovar’s imagery. The artist’s widow María Castillo, a well-known Dominican actress, recites her late husband’s diaries and poems, while a male actor reads excerpts from texts by the likes of Federico García Lorca, Charles Baudelaire and Julio Cortázar. A short documentary including interviews with the artist and his family awaits at the show’s exit.

Around 70,000 people have visited the show since its opening in April, prompting the organisers to extend it for a month (until 6 July). The project has also coincided with a surge in Tovar’s market. On 1 June Belgian collector Laurent Pestiau paid €546,000 ($569,000, with fees) for the 1971 canvas L’hermaphrodite double at a Drouot auction in Paris. The enigmatic painting broke the previous auction record for a Tovar painting, set by Sotheby’s 2020 sale in New York of La Menace (1974), which sold for $250,000 (including fees)—more than six times its high estimate.

The timing of the Tovar exhibition in Santo Domingo is auspicious given the art world’s recent return to Surrealism, fueled in part by the landmark Surrealism Beyond Borders exhibition at the Metropolitan Museum of Art in New York at Tate Modern in London, as well as Surrealism and Magic: Enchanted Modernity at the Peggy Guggenheim Collection. The modernist movement’s rising stock was also evident in the strong influence of female Surrealists in the 2022 Venice Biennale.

Rizek plans to pursue this moment. In addition to a forthcoming catalogue raisonné of Tovar’s oeuvre, Tovar Surrealismo Vivo will go on tour. Madrid, where nearly 50,000 Dominicans live, is the first anticipated stop, where it will coincide with the Arco art fair (22-26 February 2023), followed by a staging in Miami, where the Dominican population is around 58,000.