Peter Brook, a giant of international theatre whose stage work moved in sympathy with the visual arts, has died, aged 97

At the Morgan Library and Museum, the art of a misfit master revealed 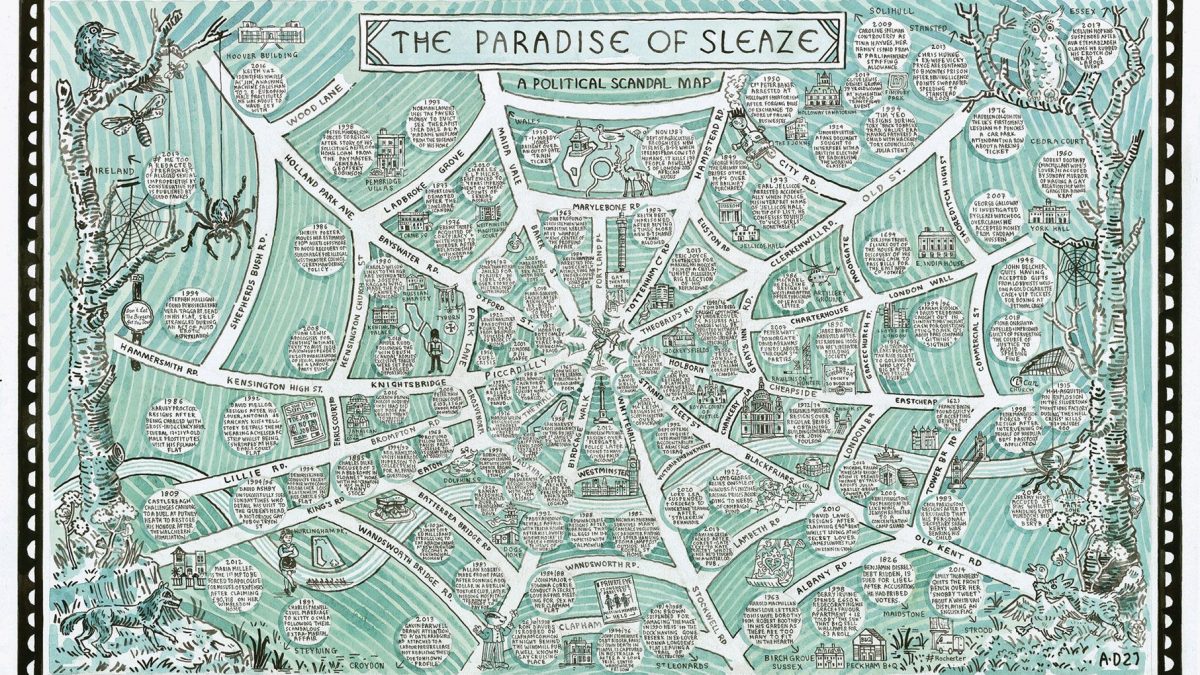 Occasionally when covering the 2015 UK general election for the Guardian, I would come upon a slightly nondescript figure in a brown hat, standing very quietly in a corner, drawing in a small, hard-bound book. Anyone peering rudely over his shoulder would have seen sketches as exquisitely detailed and witty as a Hogarth, as slyly satirical as a Martin Parr photograph. It was Adam Dant, the official election artist, and a print of the drawing, now in the House of Commons art collection, is included in this highly entertaining book.

Dant studied at the Royal College of Art and then the MS University Faculty of Fine Arts, Baroda, India. Here, in large format and following the short introduction, “The Art of Politics and the Politics of Art: My Life as a ‘Political Artist’”, are gathered many examples of his trademark style: somewhere between fine art, polemic and barbed fun, turning complex political and social history into deceptively charming maps and diagrams. His subjects range from invaders of Britain, including the brilliant-green parakeets that fly over the park yards from my desk, to Cockney Rhyming America: a map that “renames all the states of the USA according to the bizarre and arcane argot of the east London costermongers”—where we journey northward from “Solar Plexus” (Texas) to “Floating Voter” (North Dakota).

Although many of his predecessors over the centuries were banned, gaoled or sued to teach them manners, Dant’s style is rude and delightedly vulgar rather than savage: Big Apple slang in New York Tawk includes “hip flippers”, “dusty butt”, “bodini”, “juicer” and “sporno”. Brexit prompts a farewell to the continent—Quitting Europe: Some Anecdotes—in ten autobiographical cigarette packs, and his invaluable Critic’s Perpetual Drinking Calendar offers 365 excuses (or, as he describes them, “occasions, events, characters + individuals, common, royal + aristocratic, worthy of toasting”) for a quick snifter with appropriate drinks: absinthe for Edouard Manet on 29 April, gin for the discovery of the Mary Celeste on 4 December. His snail-shaped map of Parisian slang includes a pissoir ornamented with useful synonyms for “penis” and a matching set of foufounettes: “tourists using ‘l’esc-ARGOT Parisienne’,” he insists, “will be assured a friendly reception from their ‘Parisite’ interlocutors”.

Dant’s politics are rarely explicit, although it is unlikely he’d be up there on the arms of the cross with the SundayTimes and Channel 4 hammering the nails into his crucified former Labour party leader Jeremy Corbyn (The Ministry + Passion of J.C). He is clearly for the raggy and the random, for accents and slang, for scruffy street life and a bit of urban grime, for diversity at its most multicoloured patchwork. The slick and the sloppy collide in his work, most spectacularly in his tsunami of gentrification breaking on Redchurch Street in London’s East End, with yuppies, celebrities and a sprawled heap of drunken estate agents replacing the street traders, tatty little shops and flats, and his own studio.

I’m sure there are politicians and millionaires—or both—who don’t find Dant’s work remotely entertaining, including the living who are nametagged in his Paradise ofSleaze—A Political Scandal Map, which he really must update to include, among much else, “Partygate”. His labours during the 2015 general election turned into The Government Stable, a monumental drawing that imagined all the detritus of the campaign—posters, lecterns, flung eggs and photo-opportunity props—gathered into one vast Piranesian store. The then Prime Minister David Cameron’s people hated Dant spotting that the leader’s rolled shirt sleeves were actually ironed into their sharp folds by an underling and, uniquely in the artist’s career, the Liberal Democrats actually banned him from sketching while their soon-to-be former leader Nick Clegg was eating curry in a Cardiff balti house. Long may Dant’s sharp eye, brain and pen flourish.

• Maev Kennedy is a freelance arts and archaeology journalist, and a regular contributor to The Art Newspaper