People’s History Museum: a place where protests are remembered—and where they begin 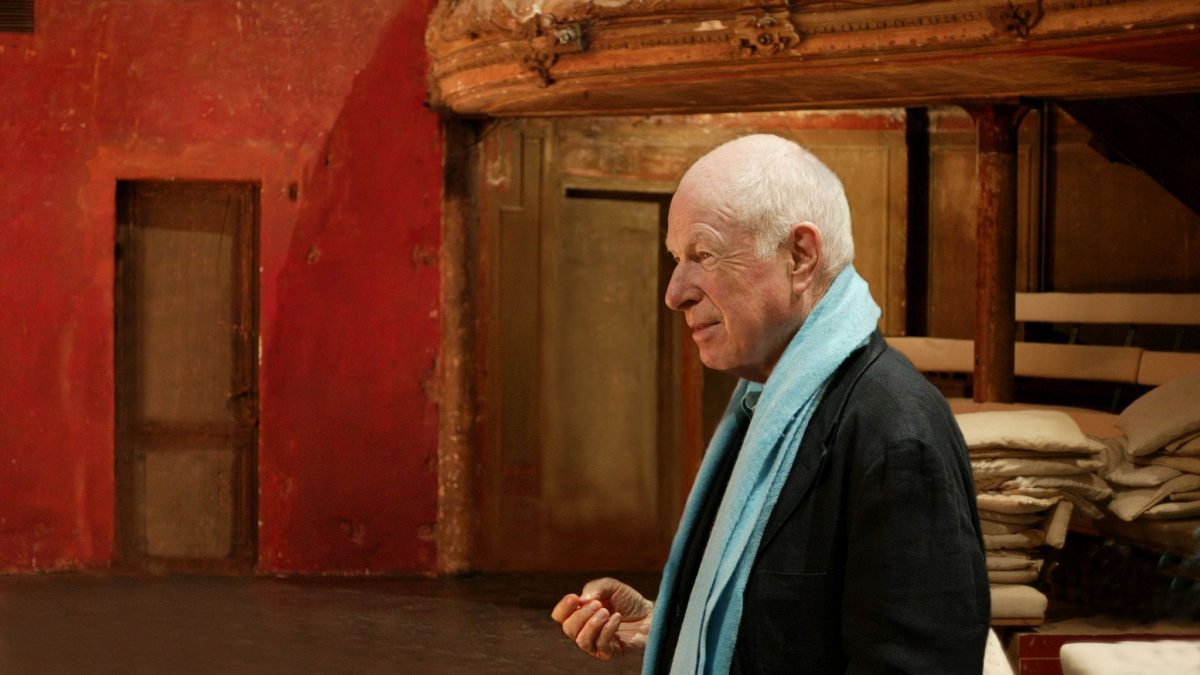 Peter Brook, one of the most innovative and admired theatre directors of his time, whose stage work had a powerful symbiotic relationship with the visual arts of the past 75 years, has died, aged 97.

Brook’s multi-layered career was made up of nearly 25 years as an innovative, sometimes iconoclastic, figure in the commercial theatre of London, and half a century as a Paris-based magus of international theatre. He was a master of collaborative, experimental productions and his 1985 adapatation and staging—across 11 hours—of the ancient Sanskrit epic The Mahābhārata was one of the great mind-expanding and world-touring artistic experiences of the late 20th century.

The London-born Brook made his name as a rising star of British theatre in the late 1940s. In his early 20s, he was already directing productions at the Shakespeare Memorial Theatre in Stratford—where he staged a Watteau-inspired 1946 performance of Love’s Labours Lost—while, from 1947 to 1949, he acted as director of productions at the Royal Opera House in Covent Garden, London. In the latter role, he made headlines by commissioning designs for stage and costumes in 1949 from Salvador Dalí, for a new production of Richard Strauss’s one-act opera Salome. Brook believed that Dalí was the only artist capable of capturing the “erotic degeneracy of Strauss’s [music] and the imagery of Oscar Wilde’s [story]”. The production had a succès de scandale, but it was an experience that neither Brook—frustrated by the conservative nature of the 1940s opera world—nor the opera house wished to repeat, and Brook’s contract was not renewed.

Brook was unusual in the degree to which he was a master both of the visual and the word in his stage productions. In two of his most admired Shakespeare stagings—Titus Andronicus at the Shakespeare Memorial Theatre, 1955, and King Lear for the newly established Royal Shakespeare Company in 1962—he was credited as both director and designer, and he worked closely with stage and costume designers, who channeled his ideas for the look of the performance.

The production of Titus Andronicus, a piece long-considered unstageable because of its heartless, gory subject matter, was a triumph of stylisation that eschewed stage blood in favour of the techniques of Japanese Noh theatre, where the blood emanating from the mutilated Lavinia (played by Vivien Leigh) was represented by streaming lengths of red ribbon. (Brook’s second great achievement was reportedly to elicit from Laurence Olivier one of his most unmannered, and emotionally true, performances in the title role.)

Brook’s notes for these productions, including sketches for stage designs some of them roughed out on bills from London restaurants, were among the archive of his papers acquired by the Victoria & Albert Museum, in London, in 2014. They also contain his notes on a performance of Chinese Operas, at the Westminster Theatre, London, in 1947, which later inspired his celebrated 1970 production of Shakespeare’s A Midsummer Night’s Dream—set in a white-box set designed by Sally Jacobs and with the actors, in brightly coloured costumes performing on trapezes and stilts. The production, which transferred to New York, set a visual and metaphorical template whose influence can be felt in the history of art installations at white-cube galleries over the past half-century as much as it can in the development of theatrical production over the same period.

The production of A Midsummer Night’s Dream was one of the most concrete realisations of Brook’s most influential written work, The Empty Space (1968), which opens with his most-quoted dictum: “I can take any empty space and call it a bare stage. A man walks across this empty space whilst someone else is watching him, and this is all that is needed for an act of theatre to be engaged.”

Brook was an exact contemporary of Peter Hall. In 1955, the year that Brook directed Titus Andronicus, Hall had created a sensation by bringing Samuel Beckett’s Waiting for Godot to London for the first time. To Hall, Brook was the greatest theatrical innovator of his generation: “The person out on the frontiers, continually asking what is quality in theatre, where do you find truth in theatre”.

Brook felt that his chance to experiment artistically really started with a “Theatre of Cruelty” season staged in London, in honour of the work of the French playwright Antonin Artaud. It was funded by the Royal Shakespeare Company and Brook was able to work as an artist in space and time with actors but without preconceptions or a fixed time-frame. The result was a radical 1964 production of Weiss’s Marat/Sade, starring the young Glenda Jackson as Charlotte Corday, and the company-generated, anti-Vietnam War play, US (1966).

Brook founded a crucible in which to further his innovative work in Paris in 1970 where, with generous foundation subsidies, he set up a multinational, multi-ethnic troupe, and the International Centre for Theatre Research (ICTR). He also restored a disused theatre, the Bouffes du Nord, which became his acting group’s permanent home. Their single greatest achievement was The Mahābhārata, a massive trilogyon which Brook worked with Jean-Claude Carrière and Marie-Hélène Estienne, his regular collaborators, for nearly a decade. It is the distillation of a 3rd-century BCE epic, the longest poem known to literature, whose original text is around ten times the length of The Iliad and The Odyssey combined.

The first performances of the piece, which was designed to offer what the critic Mark Lawson has called “a universal comprehensibility through image and gesture”, was given in a disused quarry near to Avignon. Descriptions over the years have recorded performance lengths at different sites as lasting anything from nine to eleven hours. The trilogy toured the world, transferred to the Bouffes du Nord and then, in English, to Brooklyn, New York City, and to Glasgow. In Brooklyn The Mahābhārata enabled the revival of the abandoned Majestic vaudeville theatre, and in Glasgow the conversion of the former Museum of Transport into the Tramway arts space. To critics who sawThe Mahābhārata as being Orientalist, Brook countered that the ICTR, with its multi-racial personnel, had always worked against the evil of racism.

The novelist Bernardine Evaristo paid tribute to Brook following his death, remembering his production of The Ik, a 1975 play by Colin Higgins and Denis Cannan: “The Ik (set in Uganda) at the Roundhouse in 1976 when I was 15/16 was unforgettable: multi-racial (ahead of his time), inspiring, puzzling & an actor threw up (for real, I was told) each night on stage. I wonder what I’d make of it today.”

When considering the Venice Biennale in the Arsenale buildings or the Triennale di Milano expo installations in borrowed spaces around the city, it is hard not to be reminded of their influential theatrical equivalents: the Tramway arts space, the Avignon quarry, and other “found” theatrical spaces made possible by Brook’s epic, cosmopolitan, multi-national, touring productions, and especially byThe Mahābhārata.

Brook remained the artistic director of the ICTR until 2011, and went on working to the end, publishing several recent volumes on theatrical performance: The Quality of Mercy: Reflections on Shakespeare (2013); Tip of the Tongue: Reflections on Language and Meaning (2017); and Playing by Ear: Reflections on Music and Sound (2019). He was made CBE in 1965 and a Companion of Honour in 1983. He is survived by his son and daughter of his marriage to the actress Natasha Parry, who died in 2015.