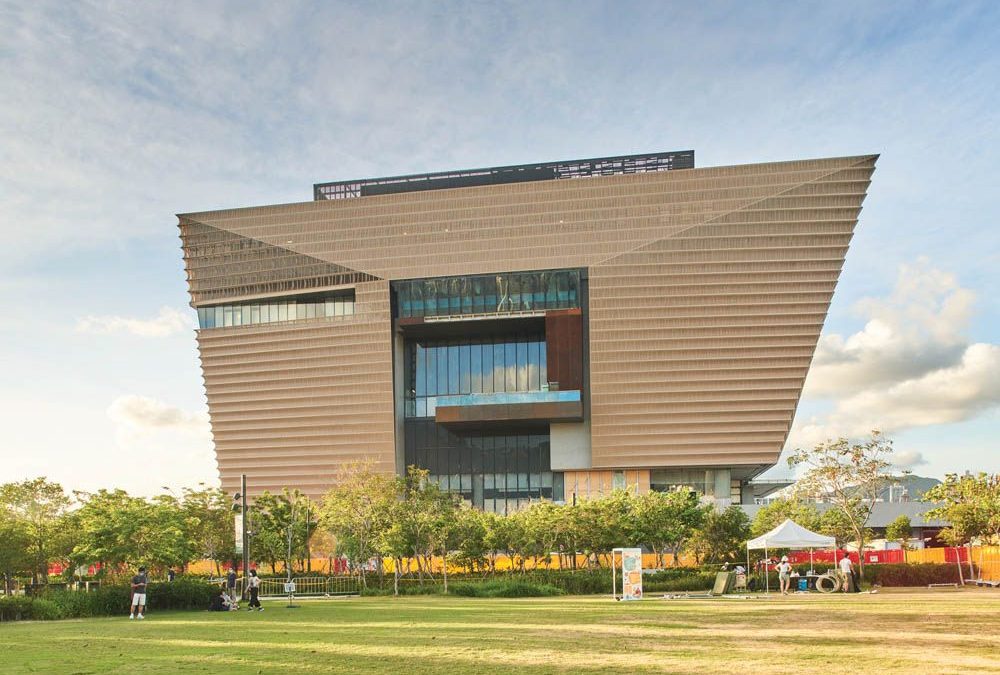 Two landmark East Asian cultural institutions, in Hong Kong and Taiwan, open this summer. Both are government-backed, and come at a time when relations between Taiwan, Hong Kong and mainland China are becoming more fraught.

The three-theatre performance space is supported by the Taipei City Department of Cultural Affairs, which also runs the Taipei Fine Arts Museum. It is hoped that the new space will attract international attention to the island nation. “Taiwan has lots of young talent,” says the TPAC director Austin Wang. “It is very exciting to see them perform, but they have no resources to go international. We will play a role connecting with the outside.” TPAC has already reached an agreement with the

Looming over Taipei’s iconic Shilin Night Market, the 50,000 sq. m performance space is already a major landmark, with a building designed by the renowned architecture practice OMA. Facility costs totalled $225m, and annual operating costs are anticipated at $16.8m, with 92% supplied by the government. The centre hopes to reduce government funding to 50% within 20 years.

The new Hong Kong museum is part of the state-backed West Kowloon Cultural District, and stands alongside the new M+ museum and Chinese opera theatre Xiqu Centre. The HKPM director Daisy Wang compares the district to the American Smithsonian. “It is one of the most ambitious cultural projects in the world,” she says. The museum’s strategic partnership with Beijing’s Palace Museum in the Forbidden City is a “special and close relationship, with loans of unprecedented treasures”, she says. The Beijing museum will provide an initial loan of 914 items for up to a year, but will not provide any funding or controls over programming, stresses Wang: “We’re not a ‘branch’, we are independent.”

A $117m grant from the Hong Kong Jockey Club Charities Trust funded construction of HKPM’s 30,000 sq. m facility, designed by the Hong Kong firm Rocco Design Architects. While it lacks an acquisitions budget, the museum has received donations from private patrons, including a gift from Betty Lo and Kenneth Chu of 946 gold and silver Chinese antiques from the Mengdiexuan Collection. More will be sought.

The non-profit Jockey Club supports many arts endeavours in the city. HKPM’s opening exhibitions include one about horses, but Wang denies that the subject is in deference to the funder. “The Jockey Club is a very professional philanthropic organisation,” she says. Other opening exhibitions include The Making of Masterpieces: Chinese Painting and Calligraphy from the Palace Museum and a multimedia project featuring six Hong Kong artists reinterpreting palace art. Education on imperial Chinese history is another pillar of HKPM’s mission, but Wang claims there will be no influence from Beijing, and that it is unrelated to controversial new laws mandating “guoxue” or mainland-centric “national education” in Hong Kong schools.

Censorship of art has intensified in Hong Kong since the passing of the National Security Law, which was issued in 2020 by mainland authorities in reaction to the city’s pro-democracy protests of 2019. At HKPM’s sister institution, M+, works by mainland artists referencing the 1989 Tiananmen massacre of Chinese student protesters have been removed. But Wang claims the HKPM’s scope insulates the project. “We are dedicated to traditional art and culture, and committed to professionalism and best standards,” she says, reiterating that the museum has “no issues at all right now” with censorship.

In contrast, TPAC opens amid an atmosphere of cultural freedom. “There is no censorship here [in Taiwan], we are pretty much free,” Austin Wang says. “There is absolutely no government oversight” of content even at state institutions, he says. Taiwan, self-governing since 1949 and democratic since 1996, is territorially claimed by China, yet it has never been part of the People’s Republic. The island’s liberalism foments a lively cultural scenes, including what Wang calls a “golden age” of theatre, as state theatres have shifted from being “rental houses” for independent troupes to actively collaborating with creators. “Despite the pandemic, creative energy has been very strong,” he says. “Compared to the West, things can very easily get done in Taiwan. It is a technology island, with resources and talent.”

TPAC’s opening season includes collaborations with the artist Hsieh Chun-Te and the film-makers Tsai Ming-liang and Tun-ye Chou. Along with a project by the independent Hong Kong dramatist Vee Leong, the line-up brings artists from Myanmar, Vietnam and New Zealand for the ongoing interactive series IsLand Bar—Ratava. “Taiwan is right in the middle of Asia, with connections to Japan, Korea and Southeast Asia; we don’t understand these cultures, so we must work together to create an Asia identity to meet the rest of the world,” Wang says.

Official art ties between Taiwan and Hong Kong and mainland China have diminished since the mid-2010s. In independent spaces, Taiwanese artists on the mainland are particularly scrutinised, and tighter visa rules have shrunk opportunities for Chinese artists to sample Taiwan’s freer environment. Still, some interaction is possible, such as a theatre conference organised by the Goethe Institute for Taipei, Hong Kong, Shanghai and Beijing. “From the Taipei point of view that is the only window still open” for conversations with the mainland and Hong Kong, Wang says. The reasons are political more than pandemic-related, he adds. “I hope it is not for too long.”