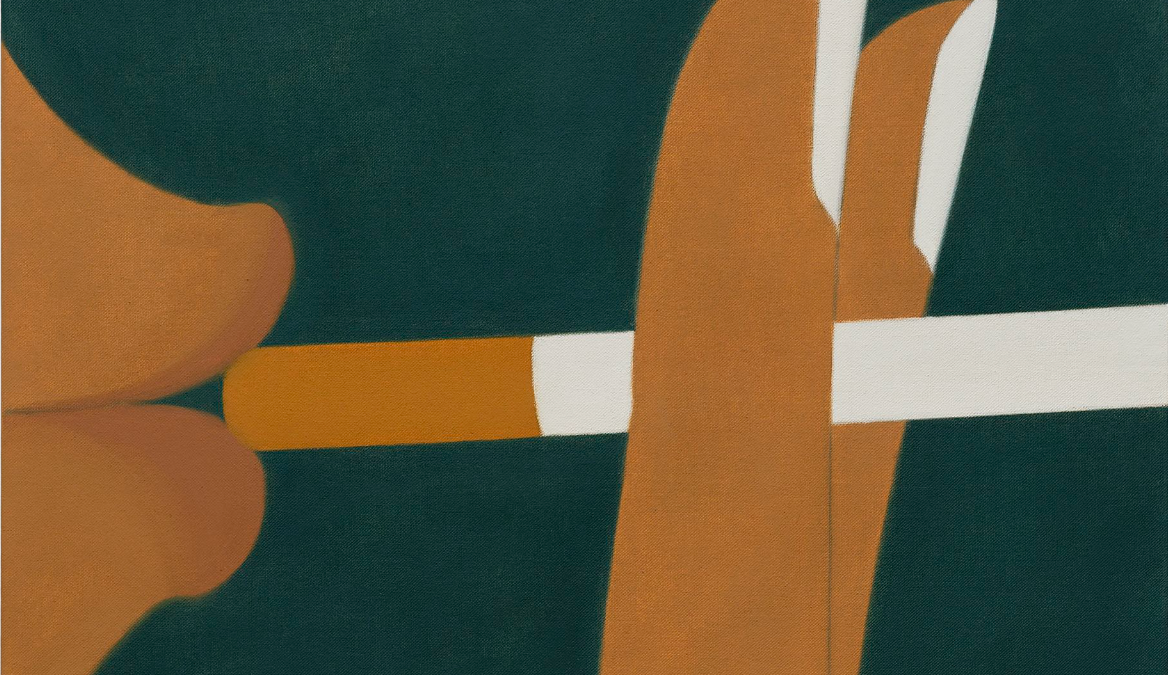 The quiet and cerebral paintings of the Finnish artist Henni Alftanhave become an increasingly prominent presence across fair booths and online viewing rooms in the past five years. Two buzzy solo shows in 2020 at the trendsetting galleries Various Small Fires in Seoul and Karma in New York (the latter of which brought her to the 2021 edition of Art Basel in Miami Beach) preceded a small exhibition at Sprüth Magers Berlin in September last year, when the artist signed to the gallery. Alftan has now staged her her largest solo show to date in Sprüth Magers’s London space.

For the exhibition Contour (until 30 July), Paris-based Alftan has made 14 oil paintings, which, in their cropped framing and precise compositions, are akin to film stills. She has depicted domestic scenes that occasionally contain figures (such as Mother [2021], pictured) as well as close-ups of books and a woman smoking a cigarette: images meant to elicit both recognition and confusion from the viewer. Her process is slow, limiting rates of production, according to gallery founder Monika Sprüth, who discovered Alftan’s work at her Karma show (where paintings were selling for around $15,000). Works in the London show are priced between $40,000 to $85,000.

While Alftan’s reticent, Minimalist interior scenes are aesthetically pleasing and suit domestic spaces, they are, according to both Sprüth and her gallery co-founder Philomene Magers, equally underpinned by conceptual ideas that challenge and muse on the limitations inherent to the medium of painting, calling to mind the visual language of Thomas Demand and works by Richard Artschwager. Alftan’s work is held by a number of major Finnish contemporary art museums as well as the Los Angeles County Museum of Art.

The Art Newspaper: Your galleristMonika Sprüth tells me that your process is quite slow, are you able to explain a little about how you work?

Henni Alftan: “My subjects come from everyday observations of things I see that usually intertwine with reflections on looking, painting and image-making.

I start by writing down a worded proposition ‘I would like to paint this thing in this manner,’ with sometimes some additional notes. I then start to work on a sketch that is quite a precise idea of the painting to come.I start from scratch with no particular model so as to be able to negotiate between purely formal considerations and the resemblance to the subject that I’m referring to. The ones that I then judge to be “a good picture” make it to the canvas, and most of those get the seal of approval to leave the studio. I reject a lot of my preparatory sketches though or redo them several times.

So yes it’s quite slow, notably because I don’t make several versions of the same picture. There’s just that one painting that can be quite small.”

I’d like to hear more about the subject matter and what the paintings are about, how you decide and why you choose to paint them?

“I like to paint subjects that also comment on their conditions of existence. I have a lot of curtains, windows, reflections and even paintings themselves in the paintings. Variations on opaque and transparent etc. It’s not so much about making art about art as it is about what is this thing in this context. For me it’s perhaps more existential. (Maybe that’s why it doesn’t feel right to make variations on the same picture. )I always see paintings as sort of archetypes of the art object. I do medium sized oil paintings on canvas.

But I’m not a conceptual artist. I have no protocol that tells me what I can and can not do in my work. Some of the choices are purely intuitional. Some pictures just haunt me.”

Your works are framed very closely and in a cinematic fashion. Can you discuss your relationship with film and cinema?

“I do my framing in the sketching phase and I make them as tight as possible so that there would be nothing superfluous in the painting. I design my sketches in view of rectangular shape of the tableau that is already there. So one of the reasons for the framing is also formal. The other is indeed a lesson that I learned from cinematic imagery, that the less you see the more you project. I’d like people to really look instead of just passively see. The fact that you see that there is something that is hidden, that you are not seeing, creates a suspense not unlike you would indeed find in a certain cinema.

I do think that pictures infiltrate our minds and pay a significant role in how we interpret our lives and the world. I don’t think my pictures feel new. It’s like I dug them up from the back of my mind where they were etched from looking too hard.

I think that drawing them from imagination or memory makes them look like how I would describe them rather than how they would actually look.”