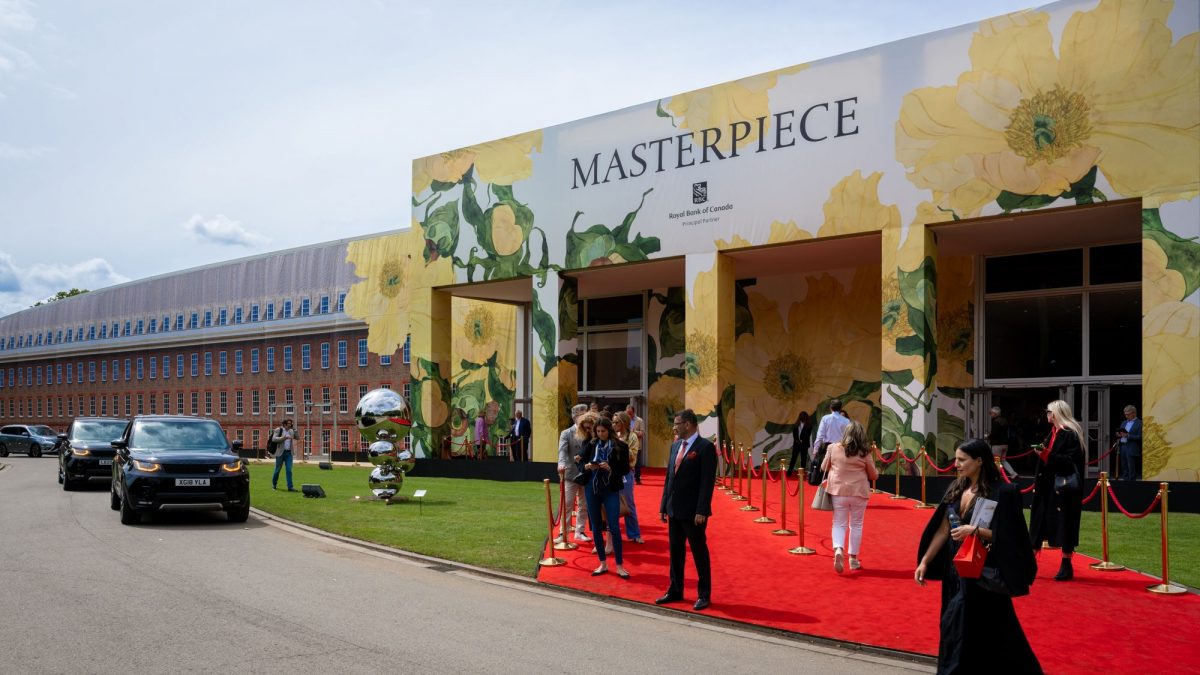 After three years of online-only projects and private tours, London’s multi-disciplinary fair Masterpiece opened yesterday to VIPs, at the Royal Hospital Chelsea (until 6 July) with a celebratory air.

Guests were greeted with a sunny entrance dominated by large scale drawings of yellow anemones by the British artist Sarah Graham, and a buzz of conversation that suggested sales were underway. The armed robbery at TEFAF the day before seemed to have done little to knock anyone’s nerves.

There was a comfortable mix of new galleries (Jonathan Clark Fine Art, Waddington Custot and Adrian Sutton) and the more familiar (including Dickinson, Charles Ede, Annely Juda Fine Art, Philip Mould and Pangolin), whilst a new orientation of the floorplan (turning it by 90 degrees) brought a calmer flow of crowds to the 11th edition of the fair.

The shift of the cocktail bars to the sides of the tent also allowed greater prominence of the sculpture series, this year organised by Melanie Vandenbrouck, the curator of sculpture at London’s Victoria and Albert Museum. Certainly three dimensionality felt abundant, with works including David Annesley’s Untitled (1969), Angela Palmer’s The Last Frontier (2021) and Lynn Chadwick’s Walking Woman bronze sculpture (1984), which sold for just under £2m as the first day drew to a close.

“People are looking for different experiences and their sense of space has changed,” says Lucie Kitchener, Masterpiece’s chief executive officer. “Experiencing art digitally can be quite a solo experience, so there is something quite celebratory about coming together to experience it collectively.”

As promised in pre-fair announcements, there was also a bounty of natural world references throughout stands. The impressive 66 to 68-million-year-old triceratops skull taking pride of place at David Aaron’s stand sold quickly for an undisclosed sum, to a ‘young’ private collector. The gallery’s director, Salomon Aaron, suggested that there is “a developing collector base, but one with a lot of crossovers with pre-existing customers—after all, collecting and curiosity go hand-in-hand.”

Meanwhile, the New York-based Fine Minerals International was attracting quite the crowd to its inaugural presentation at the fair. It reported over a million dollars of sales on the VIP Day, including that of a fluorite from Russia, discovered in the 1980s and considered one of the “largest known, fine quality examples”. It sold to a “well-known mineral collector who was visiting from overseas”, with a price point of around $600,000.

“We decided to do Masterpiece [in part because] it was a vision of the late Chairman Philip Hewat-Jaboor. He wanted to make the art community more aware of this exciting collectible field that hasn’t been shared with the community, in a way like this before,” says Daniel Trinchillo, the gallery’s founder.

Combining the sculptural and natural worlds, was London’s ArtAncient, whose collection of little understood gogottes (natural sandstone formations originating from the prehistoric sand dunes of Fountaineblue, near Paris) were priced between £4,500 and £150,000—eight of which sold during the preview.

The talks programme picks up on the fair’s broader leaning towards female talent “undiscovered” female talent, which included a painting of Anne of Cleves (1825) by Marie Victoire Jacquotot at E&H Manners and A blue and yellow Macaw (around 1800) by Sarah Stone, the first female British painter of birds and animals to receive professional recognition. The work, on the stand of Karen Taylor Fine Art, was on reserve for a museum.

Away from gallery stands there were thought-provoking light installations All the Flowers are For Me (2017) and This is NOT a Refuge II (2018) by US-Pakistani artist Anila Quayyum Agha, represented by Sundaram Tagore Gallery. A display devoted to the 100th anniversary of the discovery of Tutankhamun’s tomb, put on by Factum Foundation and Skene Catling de la Peña, also offered a stimulating respite from pacing the tent floors.

The event’s celebration of the multidisciplinary with its dash of luxury can, at times, feel like a bit of a bubble. But, after difficult years that have seen a global pandemic, Brexit fallouts and an ongoing cost of living crisis, looking at “nice” things can feel, well, rather nice.