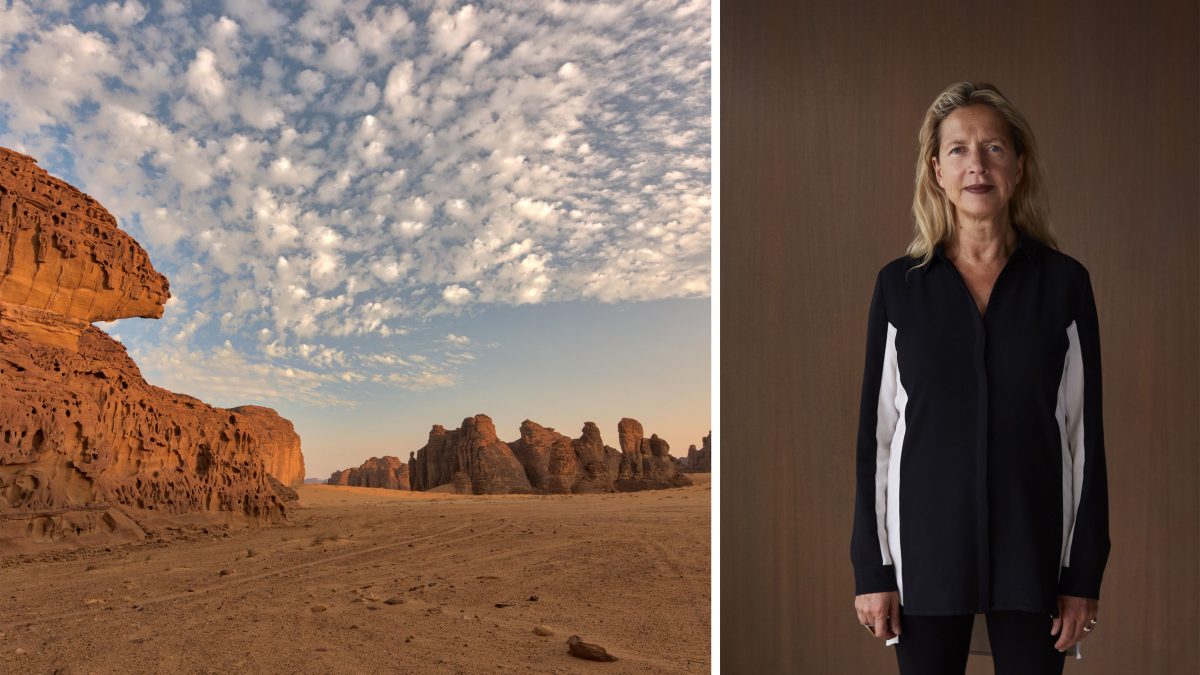 Saudi Arabia’s relentless drive to promote its cultural credentials continues with news of five new permanent works planned for the Wadi AlFann area located in the vast northwest region of AlUla. The large-scale, site-specific commissions will be overseen by Iwona Blazwick, the former director of Whitechapel Gallery in London, in her new role as the chair of the Royal Commission for AlUla’s Public Art Expert Panel.

Blazwick defends her new post in light of the country’s concerning record on human rights. “I’d rather be involved where I can help contribute to freedom of expression, to art being nurtured, because I believe art changes society. That’s fundamental to who I am. And it’s fundamental to my support for women throughout my career,” she says.

The five artists selected for the Wadi AlFann initiative, meaning “Valley of the Arts” in Arabic, are Manal AlDowayan, Agnes Denes, Michael Heizer, Ahmed Mater and James Turrell. All of the works, spread across a 65 sq. km site, are due to be unveiled by 2024. Last year, Saudi Arabia unveiled the masterplan for its vast cultural project in AlUla, detailing an ambitious archeological research and conservation programme “to protect, preserve and sustainably rejuvenate” one of the world’s largest and oldest cultural landscapes.

Blazwick’s remit involves commissioning permanent artworks in the desert. “My role is to basically provide a lead for Modern and contemporary art in the region; this is part of a much bigger cultural master plan which involves archaeology and shining a spotlight on prehistoric and historic civilisations such as the Nabataeans,” she says. “As I became increasingly involved, it became clear that we wanted [the Wadi AlFann project] to reflect not just the great pioneers of Land and environmental art and successive new generations but to also give it a global as well as a local and regional perspective. There really is an amazing talent pool in the region.”

“We’ve got three extraordinarily significant pioneers in sculpture,” Blazwick says referring to Turrell, Heizer and Denes. Heizer will introduce incised engravings in the sandstone rock, relating directly to the geology of the area and the detail of the Quweira sandstone. “Heizer does the opposite of constructing assemblages that we look up to, he takes the land away, and uses the negative to evoke mass and volume,” says Blazwick. Denes’s new work will “continue her ongoing series of monumental pyramids… these new pyramids will awaken the silent canyons they sit within,” a press statement says.

AlDowayan is proposing “a kind of doppelganger of the ancient settlement of AlUla. “What she’s going to do is to replicate aspects of that labyrinthine settlement (The Oasis of Stories) but use it also as a way of recording the memories of the people who live there,” Blazwick says. Ahmed Mater is going for “something more mesmeric, more chimerical [with the work Ashab Al-Lal], which is the concept of the mirage, which goes all the way through literature, through poetry. It’s a trope which is absolutely fundamental to the desert.”

The education aspect is crucial, she adds. “What this project enables people to do is to have a direct experience of working with an artist and be involved in researching a work of art and its genesis. It’s a fantastic training opportunity. It’s so complex what a Turrell sky chamber involves in terms of not just geometry, but also the kind of techniques that he deploys in how he captures light and colour.”

The notoriously conservative country is opening up internationally and diversifying its economy in line with the government’s Vision 2030 initiative, launching a slew of art initiatives such as the Desert X contemporary art exhibition. But human rights issues underpin any discussion of how the country is evolving.

Saudi Arabia’s Ministry of Interior announced that it executed 81 men on one day in March. The group, including seven Yemenis and one Syrian national, were convicted of “multiple heinous crimes”, including terrorism, said the state news agency SPA. Lynn Maalouf, Amnesty International’s deputy regional director for the Middle East and North Africa, says in a statement that “Saudi Arabia’s deeply flawed justice system metes out death sentences following trials that are grossly and blatantly unfair”. Amnesty also reports that last year thousands of people were likely executed in China but the numbers remain classified.

Some commentators subsequently say that the government of Saudi Arabia benefits by improving its image through what some have called “art washing” (using art to smooth over thorny issues such as human rights abuses. Ongoing controversies in the kingdom include the murder of the journalist Jamal Khashoggi in Istanbul in 2018, and Saudi Arabia’s role in leading a coalition against Houthi rebels, backed by the US and the UK, in the ongoing war in Yemen).

An artist who has exhibited at Whitechapel Gallery, and prefers to remain anonymous, says that she “could never work with the tyrannical Saudi regime”. Blazwick says: “If you are interested in human rights, then surely you must be interested in change. And I know that there’s a huge suspicion and a scepticism about whether art is used in a purely emblematic way. But what I’m seeing is systemic change at an institutional level [such as] art and culture being brought into the [Saudi] school curriculum.”

She highlights key projects such as the Madrasat Addeera initiative, an arts hub run by the Royal Commission for AlUla aimed at promoting traditional regional crafts. “I was really impressed to see lots of young women there learning about geometry and design. They’re also learning artisanal skills. We’re seeing women artists being invited to exhibit and to create massive permanent commissions. If I can support such change, through my years of experience of championing female artists and disseminating arts education, then why not be part of it and help bring that change about?”

Working with certain artists has, she says, been transformative. “I was so convinced by Manal AlDowayan. Not only is she a very accomplished artist, she is a brilliantly articulate champion of the need not to be silenced or isolated. For her to now have the freedom to move, the freedom to exhibit and to speak and to publish—that’s absolutely game changing. I’m not really sure what standing by and doing nothing achieves.” She adds: “I respect those who feel that they can’t work with those countries. I’m feeling very ambivalent about America at the moment because I can see women’s rights are being rolled back there.”

Crucially, other Western curators have decided to work in Saudi Arabia such as Philip Tinari, who organised the Diriyah Biennale in Riyadh earlier this year, and Venetia Porter, the curator of Islamic and contemporary Middle Eastern art at the British Museum, who curated the 21,39 contemporary art show in Jeddah in March. Last year, we reported that the Saudi cultural scene is in a “moment of decisive shift”.

“When you are invited, I think you should walk through that door because the more isolated the community is, the less opportunities there are for local people; we need to create a dialogue between the local and the global, to learn from each other and build the vision together,” Blazwick says. Asked if the fee for the post was a deciding factor, she says: “I’ve spent most of my career working in the public sector. I’m not driven by money, I can tell you that. It’s never been my motivation.”