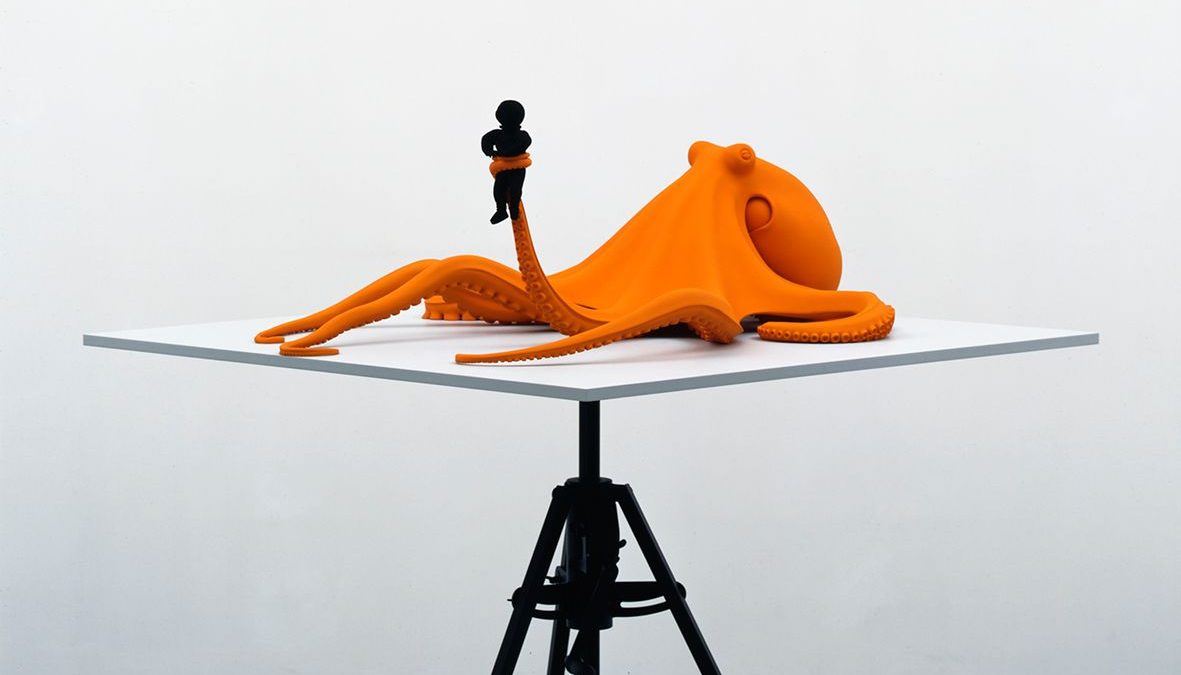 A small but perfectly formed exhibition in Athens, honouring the career of the German sculptor Katharina Fritsch (b.1956), presents a cool and quietly compelling form of retrospective. The show provides a complex self-portrait of one of our most thoughtful contemporary artists, while also reflecting on this moment in time. Combining carefully crafted handmade plaster moulds with what has been described by White Cube gallery—who used to represent Fritsch before she joined Matthew Marks Gallery—as the “near pathological specifications” the artist provides for the industrial fabrication of her finished pieces, she has been equally fastidious about every aspect of the exhibition-making. In the process, as the exhibition’s curator Jessica Morgan explains, Fritsch “had essentially come up with another work, which is the exhibition itself”. It is a retrospective that, more than most, speaks to the interior life of the artist and memorialises her world.

Occupying three floors of the private George Economou Collection building in Marousi, Athens, the show spans four decades of the artist’s work. Its planning began in 2019 and, in its own way, the exhibition acknowledges the portents and pressures of the past few turbulent years. In this regard, it becomes a slow and revelatory exploration of the artist’s thinking across time, while also revealing consistent themes such as her study of twilight, the mythological, the uncanny, as well as the melancholy of our inevitable demise.

It becomes a slow and revelatory exploration of the artist’s thinking across time, while also revealing consistent themes such as her study of twilight, the mythological, the uncanny, as well as the melancholy of our inevitable demise.

To create this new ‘work’, Fritsch first built a perfect replica of the space. Within this space her sculptures have, as usual, been positioned with extraordinary precision to create different conversations and perspectives, effectively orchestrating the viewer’s gaze. As Morgan says, Fritsch sets up “a chess game between the works and you”. Nowhere is this more evident than on the top floor of the exhibition, with sculptures ranging from a piece made in 1979 to ones created specifically for the exhibition. The artist calls this her “cold floor”, with its predominant colours of black and silver; the prominence of an upright black vase; and a flat, relaxed, black hand, modelled with a level of detail usually associated with handcraft. The relationship to Surrealism—and especially Giorgio de Chirico—is explicit in a surreal and abstract self-portrait, positioned on a fluted classical column that brings it up to the exact height of the artist. Across the room lies the severed black hand, with every vein and wrinkle delineated, intimating mortality. But it is also the right hand of the artist—a symbol of creation.

On the ground floor we find a sequence of works owned by the Collection and made in 2017 to be exhibited together: Ei/Egg, Laterne/Lantern and Schädel/Skull. Their equal monumental scaling and vivid colouring—typical of Fritsch’s decision-making process—demand a different kind of attention, while, seen together, these objects complicate one another’s meanings further. In this way the artist creates new narratives and atmospheres. There is also the push and pull of pieces that look like they can never have been made by hand and whose application of paint confuses our sense of light and time of day; the lantern, for example, seems to both emanate and absorb light.

The second floor explores dreams and narrative, with a vibrant orange octopus laid out on a white table, as if a dead specimen, though it proves very much alive, powerfully clutching a miniscule black sea diver in its tentacle. The diver forms a direct relationship with the black and white screen print on the wall behind, in which a diver, now quite large, looms over a drowned female he has discovered amid a wreck. She is as submissive as the shape-shifting octopus is in control. In this sense the octopus, with its legendary intelligence, takes back the female power that has been surrendered. A life-size sculpture of the disembodied, upright, pointing hand of the artist, mimicking the hand of God, confronts these pieces from across the room, directing the narrative through the way it is situated and creating a rich constellation of objects.

Skarlet Smatana, the director of the Economou Collection, and Morgan have collaborated closely at every point with Fritsch. Together, their careful curating of the gallery space even allows for a different visitor experience of ascending by lift—where they are presented with very specific views as the lift doors part—or the ‘journey’ of climbing the stairs to the top room. Thus, the viewer is required to engage with the space in an equally considered way. This is not an exhibition for a quick tour and a cursory appraisal; this is a demanding experience with the artist among us the entire time.