‘The key to successful collecting is studying art history’: philanthropist Marguerite Steed Hoffman on what she collects and why 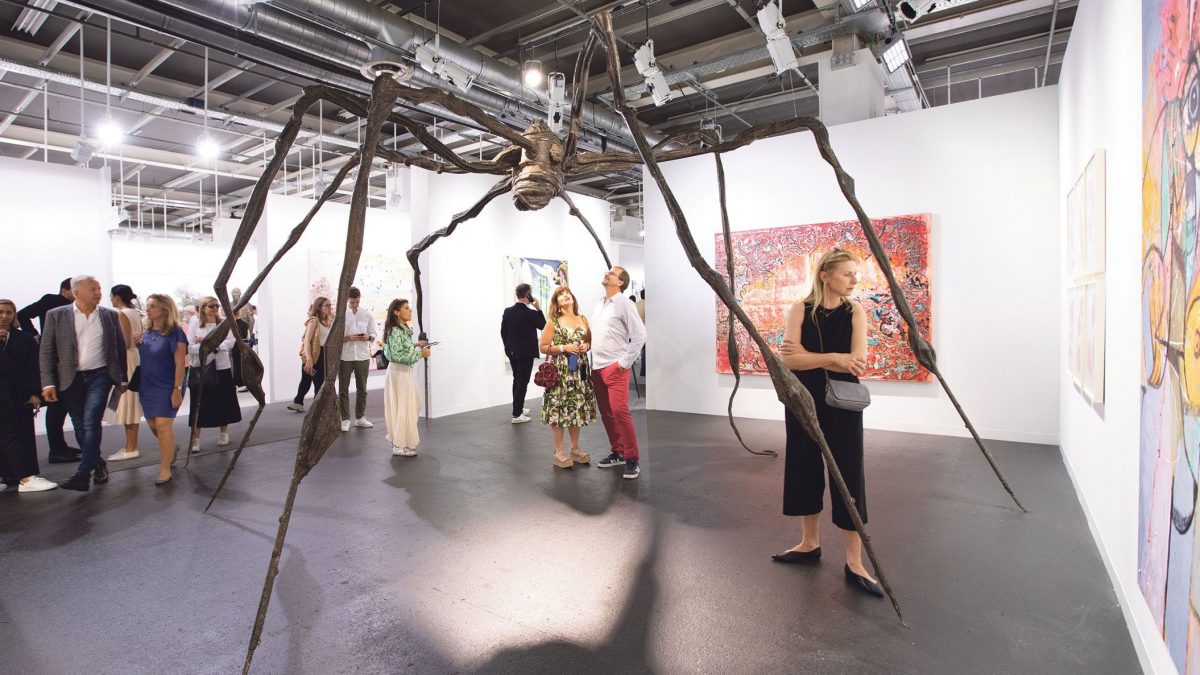 Art Basel opened its doors to first choice VIPs today and, in many ways, it was business as usual. Most sales had been pre-arranged—before the Dow dropped 800 points, which was pre-occupying the Americans back in attendance after a three-year hiatus.

Nevertheless, “Art Basel is back in full force and in great form,” says Marc Payot, the president of Hauser & Wirth. The gallery reported selling more than $75m worth of art in the first few hours, including Louise Bourgeois’s imposing bronze Spider (1996), installed in the middle of its stand, which found a home for $40m.

There are signs, however, that a recalibration of the market is underway. With strict Covid-19 measures still in place on the mainland, Chinese collectors were thinner on the ground—some have sent Europe-based advisers in their stead, though dealers reported welcoming clients from Singapore, Hong Kong and South Korea. Payot says he was “pleasantly surprised” by the number of collectors and advisers from Asia at the fair.

Gagosian’s chief operating officer Andrew Fabricant, meanwhile, detected “a much broader mix of people” at the VIP opening. “There’s definitely a sea change,” he says. “It felt like a different generation of people than before.”

A new generation of artists is also taking the market by storm, and even Art Basel’s traditional roster of blue-chips appears to be giving way to an emerging crop of red-chip artists.

Anne-Claudie Coric, the executive director of Galerie Templon in Paris, says her gallery “anticipated this slight shift in the market” and has this year “focused on an intergenerational dialogue between artists”.

The gallery is showing “historical works” by established US artists such as Jim Dine, Jules Olitski and Ed and Nancy Kienholz alongside more “experimental” pieces by a “younger, globalised generation” of artists including Kehinde Wiley, Billie Zangewa and Omar Ba—“three artists who know Western art history perfectly well and yet have a foot in Africa and its specific challenges”, Coric says.

“There’s definitely a sea change. It felt like a different generation of people than before”

Adding to its roster of abstract artists, Lisson is “expanding its remit” to include more figurative painters, according to the gallery’s curatorial director, Greg Hilty. At the fair, Lisson is showing works by its new recruits—Li Ran, Yu Hong and Jack Pierson—all of which sold during the opening day, for $32,000, $220,000 and $225,000, respectively.

Mega galleries are also mixing it up. Gagosian is showing a 1953 painting by Picasso of his wife and muse, Françoise Gilot, alongside works by new additions Ashley Bickerton, Jordan Wolfson and Rick Lowe—artists with established careers but relatively under-developed markets. Fabricant says the gallery sold more than 40 works at the VIP opening; prices on the stand range from around $500,000 to up to around €20m for the Picasso. Pace, meanwhile, has primary market paintings by Loie Hollowell (priced at $450,000) and Adrian Ghenie ($1.8m) on its stand (both sold within the first two hours of the fair opening).

Historically, the home for emerging and undiscovered artists at Art Basel has been upstairs. Here, Mariane Ibrahim, who is exhibiting at the fair for the first time, is showing all new works on her stand. Prices range from $25,000 to $400,000—for the Ghanaian-born artist Amoako Boafo’s Puppy Blankie (2022), which sold on the opening day to a private collector. Boafo’s market has swiftly risen in recent years, in large part down to a run of auction sales—against the artist’s wishes.

Ibrahim notes how the “shift in power” in the art market also comes at a cost to younger galleries. “We take the risk of nurturing young artists; mega galleries won’t change diapers,” she says. “But if they are working with established artists as well as young artists, that becomes difficult—it’s like having a seat at the adults’ table as well as the kids’ table.”

It is also a matter of supporting an artist through the early—and often challenging—stages of their career, Ibrahim argues. “We have to give space and time for an artist to breathe, for them to find their signature style,” she says, noting how each of the artists on her stand has been subject to museum exhibitions and acquisitions.

“We have done the groundwork, now it’s time to show them here,” she adds. By the end of the first day, the gallery had sold half of its stand.

Another major factor impacting the art fair ecosystem has been the cost of shipping, which, as Templon’s Coric puts it, has “exploded all over the world”. This has meant the gallery had to be “extra careful and strategic in terms of shipping, focusing on pieces that we already had in Europe”, Coric says.

Known for its large-scale sculptures, the Unlimited section of Art Basel this year boasts a significant proportion of two-dimensional works. Among the smallest is a group of miniature paintings by Mexico-based artist Francis Alÿs depicting barbed wire fences and closed borders around the world, including between Hong Kong and China; and India and Pakistan.

Conceived as one work, the series of canvases is priced between $1.5m and $2m and was transported to Switzerland in a single crate—a “distinct advantage”, says Alÿs’s dealer Peter Kilchmann.

Lisson’s Hilty notes how everyone has become “a little pragmatic” when it comes to transportation; one of the gallery’s works was shipped from Shanghai, arriving with just one day to spare. “We aren’t throwing money at the problem, but we are making the best of every situation,” he says.

Indeed, as Marc Spiegler, the global director of Art Basel, noted during the press conference yesterday, “these are still not normal times”.

He added: “We are at the tail end of the pandemic and in the midst of the first European land war in 30 years; a tragedy whose impact becomes more apparent every day.”

Add to that plunging global markets—the Dow Jones is down around 20% this year alone, while cryptocurrencies are tumbling—and our “new normal” is likely to be to tested in the not-too-distant future.