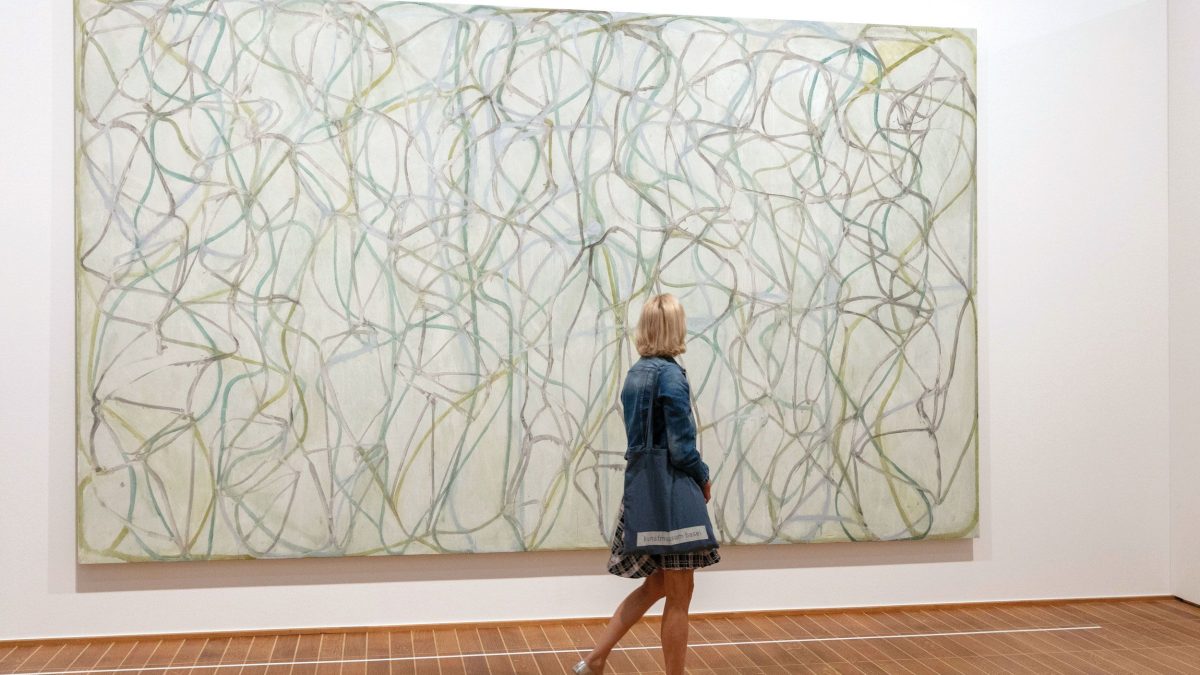 Commissioned to design new stained-glass windows for Basel’s cathedral, the American artist Brice Marden travelled frequently to the Swiss city, starting in 1978. Over the course of seven years, Marden—now 83 and based in New York City—grew intimately familiar with Basel, an experience that left a lasting impact on his work.

“Marden returned to a different colour palette, lighter and brighter,” says Josef Helfenstein, the director of the Kunstmuseum Basel. “During his time in Basel, you can see the line re-enter his work and his paintings. It is quite beautiful to witness that transition.”

Helfenstein is the curator of Inner Space, an exhibition of more than 100 of Marden’s works, which traces the artist’s trajectory from the 1970s to today. The selection includes ten paintings, complemented by more than 80 sketches and assorted graphics.

Among the sketches are Marden’s proposals for Basel Minster’s stained-glass windows, seen for the first time in Europe. Although never executed, the window studies offer a glance into the artist’s development over his time in Basel. Rich in the primary colours that have come to define his later palette, the designs offer a lively contrast to the sandstone cathedral while adapting to the structure of the late Gothic window framing.

The result is a connection between the architecture of the past and the Abstract Expressionist style popular at the time of the windows’ conception. Drawing on the works of his contemporaries such as Donald Judd and Mark Rothko, there is a unique geometry embedded within the windows’ patterns. These sketches move beyond the two-dimensional as they capture both the zeitgeist and the spirit of a particular place, reflecting on the city in a way that only an artist well-acquainted with it can capture.

The proposals for the windows are likewise a colourful shift away from the black-and-white geometry of Marden’s early series, the Post and Lintel monochromatic panel paintings (1984/2019) that preserve a somewhat stiff formality. The paintings, also on display in the exhibition, serve as a startling contrast to the artist’s work after he transitioned in Basel to a freer format, as seen most readily in his large-scale painting The Muses (1991-93).

One of the largest oil paintings created by Marden, The Muses is displayed at the Kunstmuseum Basel alongside sketches for the work in a muted grayscale palette. With The Muses, Marden adopted an almost calligraphic style—nodding not only to his work in Switzerland but to other travels undertaken from the 1970s onwards. Marden’s voyaging took him through Greece, North Africa, and parts of East Asia as well as to an exhibition on Japanese calligraphy, and served to broaden his brushstrokes and expand his repertoire. (Marden and his artist wife, Helen Marden, have kept houses and studios on the Greek island of Hydra, since the early 1970s, and in Marrakesh since the early 1990s.)

The effect of that inspiration can still be felt in Marden’s more recent works from the 15 x 15 Kremer ink series (2015-17). Reminiscent at times of Jackson Pollock’s drip techniques, these pieces nestle nicely into the Kunstmuseum Basel’s permanent collection of post-war contemporary American art, while retaining a studied and steadied hand that makes them uniquely their own.

“The work is very contemporary,” says Helfenstein. “His lines and the web-like structures of his late paintings and his works on paper—there’s something very beautiful, fragile about them. Like our times and our planet.”