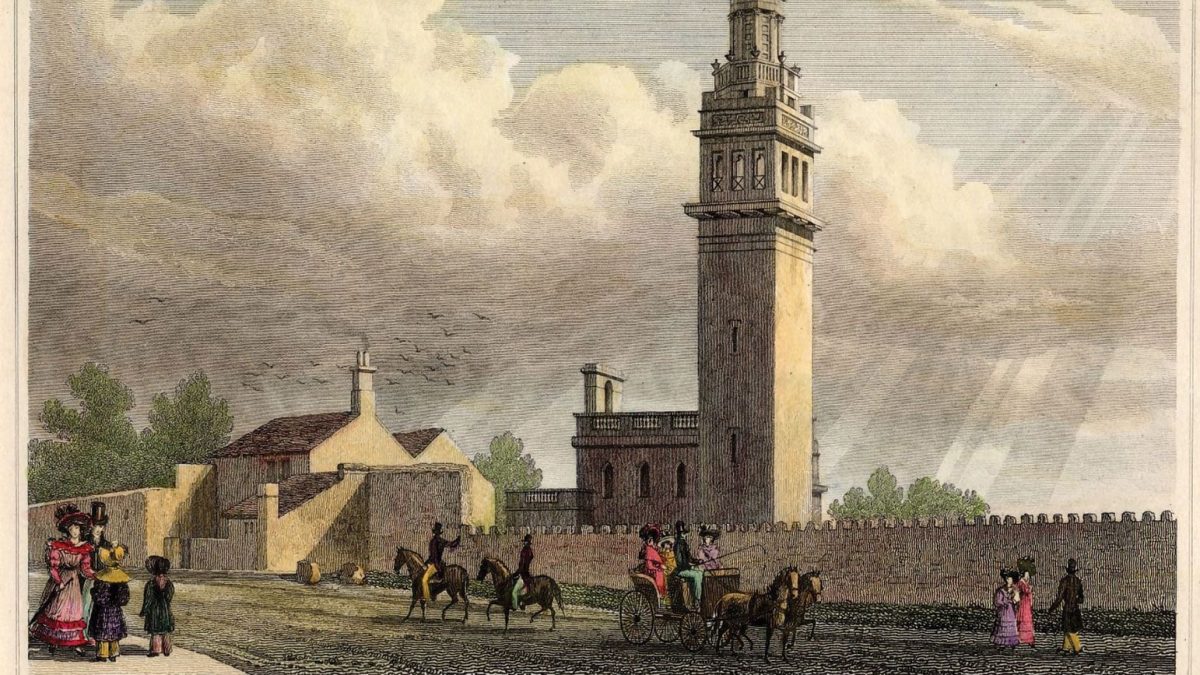 When the wind blows and the tower on Lansdown Hill high above Bath palpably sways, it’s easy for a visitor who has climbed 154 steps to believe that the whole Grade I listed structure is judged at risk—and to remember its builder was famous 200 years ago for towers that collapsed.

“Amazing, really, that it’s still standing” says Amy Frost, curator at the Bath Preservation Trust, which owns Beckford’s Tower. Frost’s responsibilities include placing buckets when rain overtops the new lead gutters and seeps through the original patchwork of scrap timber lining the lantern. A fire broke out in 1931, destroying original interiors, and the tower has undergone serial repairs ever since. The trust is lodging a National Lottery Heritage Fund grant application for the next tranche: scaffolding alone will cost £300,000.

The tower tells the story of the epic builder and collector William Beckford—the only museum to do so—and his young John Soane-influenced architect H.E. Goodridge. Beckford had almost exhausted a stupendous fortune when in 1823 he sold his most ambitious creation, Fonthill Abbey in Wiltshire, designed by James Wyatt: two years later, its 300ft tower collapsed for the third and final time. He built the Lansdown tower in 1827, high above his last home in Bath, to house a collection including pieces bought back at the Fonthill auction for less than he originally paid.

Paintings by Willes Maddox, now hung in the museum and created just after Beckford’s death, show the original dazzle of the collection. His Raphael St Catherine of Alexandria and Bellini Doge Leonardo Loredan are now in the National Gallery, while other London institutions including the Victoria & Albert Museum, the Wallace Collection and the British Museum hold further pieces.

The tower has just acquired, with Art Fund help, a startling portrait of Beckford made by Maddox for Beckford’s daughter Susan. It shows him gaunt on his death bed, framed with ornaments matching his coffin. After conservation, Frost will place it near a tender portrait by John Hoppner, on loan from Salford Museum & Art Gallery, of Beckford in his 40s, a contemplative and lonely figure. Although he welcomed connoisseur visitors, corresponded widely and had affairs—all with men after the death of his wife—Frost says he had few close friends.

Beckford became a millionaire slave owner on inheriting sugar plantations in Jamaica, a contentious history told in the tower. After a scandal over his affair with a teenage schoolboy, he spent years travelling and writing—including the Gothic shocker Vathek, claimed to be written in three days and two sleepless nights—before he returned to England and started to build.

The tower crowns “Beckford’s Ride”, a mile of purchased or leased landscape between his house in Lansdown Crescent and the tower where he spent most days alone with his spaniels. Landscape, tower and collection were conceived as a single work of art, Frost says, but much of it is now housing. The trust has also just acquired a surviving meadow with a donation from Stephen Morant, a Beckford admirer who owns the last stump of Fonthill Abbey. The field includes the brambly entrance to a tunnel grotto, also being restored to tell more of the story.

The tower was sold by Beckford’s daughter. But she was horrified to learn it would become a pub, and so bought it back to give to the church. The garden became a cemetery, the tower its mortuary chapel. Beckford made his last journey, exhumed from another Bath cemetery and reburied in a Goodridge-designed pink marble tomb. He lies there still,

in the shadow of his extraordinary creation.