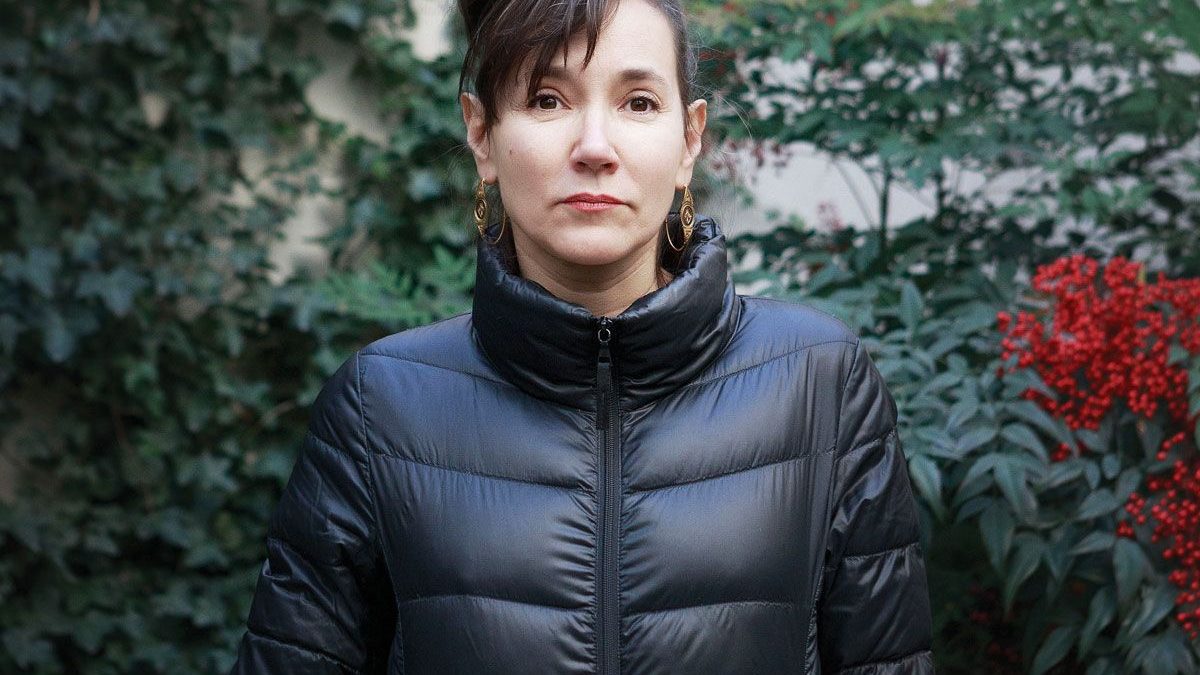 Tatiana Trouvé was born in Italy, grew up in Senegal and has been based in Paris for the last few decades. Working across installations, sculpture and drawing, she creates an imaginary world where memory, illusion, theatre, nature, the artist’s studio, and the interior and the exterior intersect. Her enigmatic work is often disquieting, hovering in an uncertain temporal space. This comes to the fore in her solo exhibition, The Great Atlas of Disorientation, curated by Jean-Pierre Criqui, opening at the Centre Pompidou in Paris this week. The show consists of variously sized drawings (including four new large-scale works), which are suspended from the ceiling and hanging on the walls, as well as a floor drawing and sculptures placed behind a curtain. In an unfolding, almost apocalyptic drama, various preoccupations are explored, from the first lockdown of the Covid-19 pandemic to fires in Brazil’s Amazon rainforest. The Art Newspaper met Trouvé in her studio in Montreuil, on the eastern periphery of Paris, in May.

The Art Newspaper: Why have you titled your exhibition The Great Atlas of Disorientation?

Tatiana Trouvé: It’s a title that often features in my work. I chose it for the exhibition because it captures the intuitive way of creating work. When one is in the studio, there’s always this state of disorientation that allows us to continue to make things and be between two worlds. And when one is disoriented, one is attentive to things that one wouldn’t notice before—like being in the mountains and looking at the stars for guidance. It’s when one is disorientated that interesting things start to happen.

How does this manifest in your way of responding to the architecture of the Centre Pompidou’s space?

I like this space a lot because it could resemble my drawings a bit—it’s a large glass cube where the interior and exterior are quite permeable. So I wanted to make an installation, starting with my drawings, where the sculptures are only seen from the outside. The sculptures are behind a curtain and inside the exhibition they are backlit and appear as silhouettes, becoming more like drawings. The drawings are all hung at different heights [and] sometimes the visitor can walk underneath them, to lend the effect of the space floating. What I’m trying to do is disorientate the visitor’s way of looking; it’s a game that’s not just frontal but that makes us lift or lower our heads, look from right to left. There’s also a large drawing all over the floor composed of different diagrams and readings of the world, from the Dreaming maps by the [Australian] Aboriginals to diagrams of chaos and cells. I want people to get lost inside it and for it to create connections with the drawings.

The show opens with your series From March to May, made during the first Covid-19 lockdown in 2020. Each day, you drew a picture on a printout of the front page of the previous day’s newspaper, starting with the French journal Libération, published the day before lockdown was imposed. Could you elaborate on your methodology?

The front page of Libération gave me the idea for the whole series because its headline, Le Jour Avant, was a reference to the film The Day After Tomorrow. I thought that if the day before was already like that, what will the day after be like? It was like entering an invisible, imaginary war, not knowing what was going to happen with this virus. For the front pages, I had selection criteria: countries that were very affected by the pandemic, where people were enclosed like us, which was easy because the pandemic was worldwide. Secondly, I wanted independent press, not tabloids or propaganda newspapers. What spoke to me sometimes was like a revelation about what I was doing in the studio or in my life. For example, I drew my dog Lula on the front cover of the Guardian. It’s funny because I’ve made a series of sculptures called The Guardian [of portraits of imaginary people in the form of chairs] and Lula is also my studio’s guardian. I drew a long queue of people waiting outside a supermarket entering the dog’s stomach, a bit like the wolf in Little Red Riding Hood. Other front covers seemed to go well with the environment of my studio so I drew elements of my studio onto them. The last front cover is also from Libération, so the series is like a loop. The 56 drawings comprise one work; there’d be no meaning in separating them—it’d be like ripping pages out of a diary.

Did the pandemic affect your work in other ways?

Perhaps it did unconsciously. It’s difficult to say because perhaps I don’t have the necessary distance yet. I regret that countries didn’t take more radical initiatives because we’re living in a period that’s an ecological catastrophe. I find it catastrophic that sales of boats and private planes have soared. Each time things torment us, or bring us pain or joy, it must come out in what we do. I’ve had ecological awareness as a citizen for years and previously made choices in my work, such as no longer using resin or Plexiglas.

I compose spaces, universes and worlds, making other images appear, onto which I can project something

You’ve said that you consider yourself above all as a sculptor even though you’re equally known for your drawings.

For me, a drawing is a sculpture; I see very little difference between my sculptural work and my drawing. My sculptures often appear in my drawings and my drawings often inspire my installations. A lot of things in my drawings have nothing to do with painting. I discolour industrially coloured paper with bleach, so I use products like a sculptor does, and I use blue and black Indian ink. I lighten the paper with the bleach to create stains and from those stains I compose spaces, universes and worlds, making other images appear, onto which I can project something. It’s like trying to read the residue in a coffee cup. One of my new drawings, L’Escamoteur, borrowing the title of a famous painting by Hieronymus Bosch of a magician performing a trick, is a world of reflections and illusions with drape-like fabric, a flying dove, an imperfect circle. I have a whole atlas of images, from my installations, sculptures, photographs or things that I collect, that haunts me and returns a lot. Although there’s the absence of the human figure, I have the impression that human beings are very present in my work. For me, [the works in the series] The Guardian are portraits of people; I don’t depict the figure but their desires or fears through books, clothes and objects, as if the chairs are inhabited by ghosts.

Your drawing Il mondo delle voci (2022) depicts a forest superimposed with one of your sculptures. What was the impetus behind it?

For me, the forest is a very talkative place where there are a lot of voices. The plants talk—scientists have found ways to record their vibrations evoking communication—and during droughts, they scream. I wanted to translate the energy inside this ecosystem and I brought my copper sculptures into this living world. I wanted to combine positive and negative images, like when one looks at something for a long time, then closes one’s eyes and sees contrasts. The drawing portrays real forests, even my own garden, as well as imaginary ones. Another drawing that I’m making could be a vision of elements underwater but also elements of a forest—it’s not a romantic landscape but the smoke of things burning. It’s very difficult to say what this painting is trying to reveal to us and it’s that complexity that interests me.

How do you think growing up in Dakar, where you were entranced by stories of spirits called djinn, influenced your work?

In Dakar, one used to say that the djinn lived in the gardens of the home. There’s certainly a dimension of magical thought in my work and that’s probably something that harks from my childhood. My father was a professor of architecture but also a sculptor. Like a lot of children of musicians and artists, I was quickly confronted by this [creative] universe and for me it was easy to draw and sculpt early on.

What role does intuition play in how you approach ideas?

I have an idea at the start for a drawing but all the choices that I make afterwards are guided by my intuition. Even at the start of my career, I made things intuitively. When I made the Bureau of Implicit Activities [1997-2007, which began by collecting employment rejection letters], I was a penniless artist, without a studio, just an enormous void. I asked myself: “Am I still an artist even though I’m invisible to everybody?” It was something intuitive to think that out of this void I’ll make something and give form to it. An artist lives a lot through the eyes of others but we have to learn to do without [recognition]. It’s both being in a solitary and independent world and yet needing confrontation.

One of your series is titled Intranquillity—what does this convey to you?

I love the word “intranquillity”. It’s an invention of [the Portuguese writer and poet] Fernando Pessoa—not being tranquil but not being annoyed either. For me, intranquillity is a form of concentration. One needs to make oneself available to that perception. I trust the visitor: whether or not they’re captured by my work, each person could perceive it in a different way. I’m not proposing a series of events to entertain the visitor but setting up a universe and the visitor is free to enter it or refuse it.