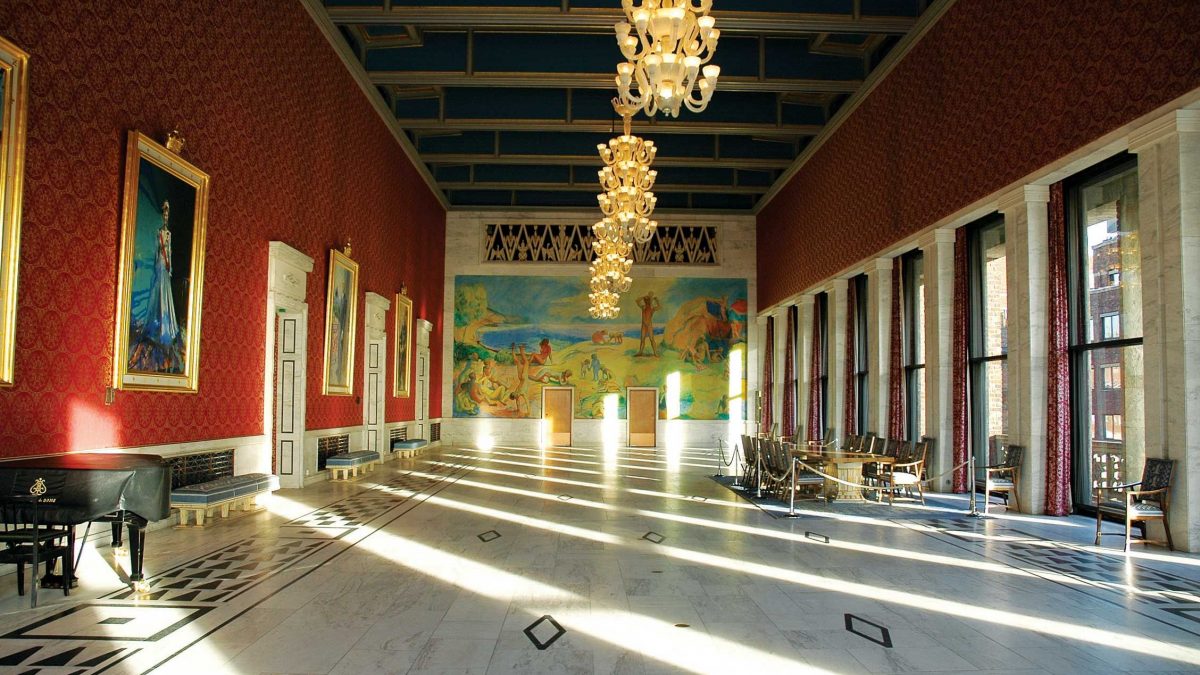 The National Museum’s neighbour, Oslo’s City Hall—the Rådhuset—illustrates the 20th-century trend for civic buildings acting as platforms for public art. The building, a red-brick Modernist colossus, is the most conspicuous construction on the waterfront. It was built between 1931 and 1950, with five years of German occupation interrupting progress. Outside, Dagfin Werenskiold’s pine friezes of folkloric figures surround the entrance while Anne Grimdalen’s stately sculpture of King Harald III on horseback flanks the west wall. Inside, the vast main hall is decorated with wall paintings of industry and fishing, while the marble floor, and even the curtains, are a jagged mosaic of geometric designs.

Those who like their masterpieces on a plate should visit À L’aise restaurant in Majorstuen, an affluent neighbourhood above the Royal Palace. Chef and owner Ulrik Jepsen brings French cooking techniques to regional Norwegian produce. Traditional dining and impeccable service are combined with a creative kitchen, where the tasting menu combines Franco-Nordic flavours and “in the high season we pickle up”, Jepsen says. He believes the energetic restaurant scene is just one part of Oslo’s renaissance: “The whole city is developing. It’s the cultural side, it’s the architecture, it’s the food.”

The Astrup Fearnley Museet is probably the only museum in the world with its own harbour. Perched on the isle of Tjuvholmen—Thief Island—where executions were carried out in the 17th century, the museum is the most prominent private contemporary art institution in Norway. The building, designed by Renzo Piano in 2012, leans towards the fjord like the upturned hull of a boat, and next to it sits a small shingle cove. Housing the collection of shipping heir Hans Rasmus Astrup, it also stages temporary exhibitions of 20th- and 21st-century art, a programme split across two sites separated by a sea-fed canal. In winter, the surrounding waters ice over, while in summer swimmers jump off the jetties.

Astrup’s collection delivers a tick-list of international figures—David Hockney, Damien Hirst, Jeff Koons—alongside major Nordic artists such as Olafur Eliasson and Elmgreen & Dragset. Highlights include monumental works by Anselm Kiefer and Sigmar Polke, while photography is prominent, with American prints by Cindy Sherman and Norwegian examples by Tom Sandberg. This summer’s retrospective on the 1960s textile artist Synnøve Anker Aurdal is indicative of the museum’s inclusive outlook. Before Astrup’s death in 2021, the collector created a foundation to safeguard the museum’s future. Audiences in Oslo, he believed, should see more than Munch.

When Crown Prince Haakon opened Deichman Bjørvika in 2020 he stated that it would “gather the city in a way almost only a library can”. Sitting opposite Oslo’s tundra-like Opera House, Deichman is a white vortex of architectural angles, with a harbourside bar and a central stairwell that opens up the space rather than fox-holing readers.

Nearly half a million books are shelved across its six floors, and art installations feature in the building’s central void. Deichman also hosts the Future Library project, an archive of new stories by authors such as Margaret Atwood and Karl Ove Knausgård, printed on paper pulped from a patch of Oslo’s forest. The stories are to remain unread until 2114.

Stepping into Frogner Kino, a recently restored Art Deco cinema in the west of Oslo, is like wandering into a celluloid fantasy. Designed by the Norwegian architects Kristen Tobias Rivertz and Lars Backer, it is a rare surviving example of an “atmospheric theatre” from the 1920s, a fashion for cinemas with evocative interiors. In Frogner, this translates to Classical Greek styling: a hand-painted mural of the Acropolis, romantic marble friezes by Per Krohg (celebrated for his United Nations Security Council Chamber mural) and a ceiling fresco unfurling a nocturne of stars. The result, says the Frogner Kino manager Tove Kampestuen, is “a total experience”.

Since Frogner Kino opened its doors as a silent cinema in 1926, it has been reconfigured numerous times, before falling into disrepair and closure. In 2017, Jan Vardøen, a local filmmaker and restaurateur, bought the building and returned it to its former glory, right down to sourcing a stock of vintage seats from Sheffield.

With its café, orchestra pit and homemade popcorn, the venue suits Frogner, a cosy and elegant quarter. Its programme is diverse, with James Bond and Downton Abbey sharing the bill with arthouse releases and classics. What draws the crowds? “It would be easier to say what doesn’t,” Kampestuen says. “Horror and thrillers.” Cinema Paradiso, however, is particularly popular.

Edvard Munch’s cultural shadow looms large over Oslo. Literally. Munch, an enormous museum dedicated to the Norwegian master that opened last autumn, provides an imposing presence on the city’s shoreline. Holding around 28,000 works, from tiny photographs to some of the largest canvases in Scandinavia, the galleries are as much a centre for debate, education and music as they are one man’s oeuvre. Recent events include a collaboration with Norwegian black metal band Satyricon and a blockbuster Tracey Emin show first seen at the Royal Academy of Arts in London (her bronze sculpture The Mother will be unveiled outside Munch this summer).

Oslo is a readers’ city, and the ultimate bookworm destination has to be Tronsmo Bokhandel. A counter-culture hub with colourful characters, its expansive shelves cover art, architecture, politics, fiction, biography and history, all with English language as well as Norwegian titles. Its photography section rivals that of the Photographers’ Gallery in London, while its basement provides a cornucopia of comics and graphic novels that wouldn’t look out of place in San Francisco. The interior is peppered with artworks, including Tintin posters, portraits of Patti Smith and reindeer sculptures. Allen Ginsberg, a beatnik who could have been Tronsmo’s spiritual godfather, called it the “best bookshop in the world”.