Seeing double: Andreas Gursky’s new and recent works show at mega-galleries on both sides of the Atlantic 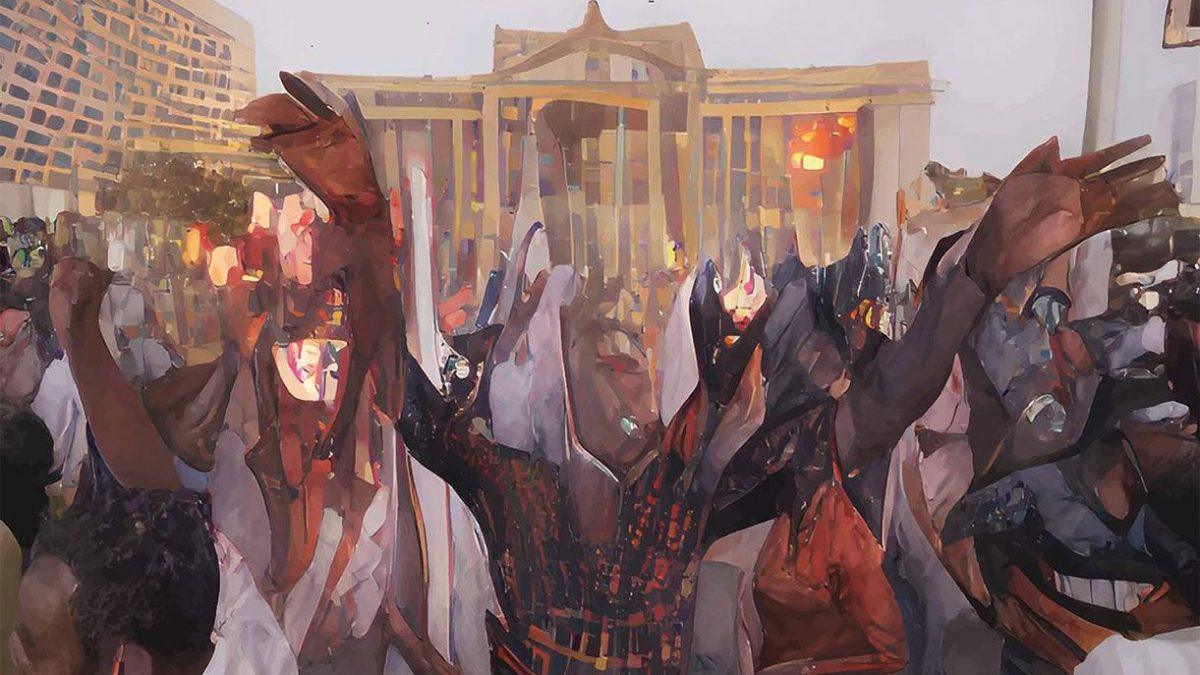 My name is Saskia Fernando and I founded a contemporary art gallery in Colombo 13 years ago. Our country is in turmoil and facing an economic crisis, with shortages of food and fuel sparking anti-government demonstrations. Artists too are protesting here. A ten-foot-high metal sculpture of a rubber slipper crushing a tear gas can was recently installed at GotaGoGama, the main site of peaceful protests in the centre of Colombo city, which has continued for more than a month. The sculpture was created, using found scrap metal, by Salinda Roshan, a student at the University of Visual and Performing Arts in Colombo.

It is one of many installations at the protest site which features long graffitied walls, a tent with art supplies, witty caricatures, intense performance pieces, theatre skits on a temporary stage and countless artists expressing the Sri Lankan people’s frustration with their ruling regime.

GotaGoGama, a pun combining the Sinhalese term for a village and the nickname for the country’s president [Gotabaya Rajapaksa], is ironically located at the “Aggravation Site” set up by the same president in an effort to contain such protests. The site received little international media attention prior to the violence of 9 May, when rioting was briefly sparked by pro-government thugs leaving the residence of Mahinda Rajapaksa, the prime minister who recently resigned.

This is undeniably an extraordinarily significant moment for Sri Lanka’s freedom of expression, particularly for a country that is no stranger to crisis. The 1990s movement, led by the island’s leading contemporaries, broke the trends of Western modernist art practices and developed a narrative concerning the country’s long, drawn-out civil war.

Internationally renowned artists from this movement, including Chandraguptha Thenuwara, Jagath Weerasinghe, Thamotharampillai Shanaathanan and Anoli Perera, have been the most influential artists on the younger generation on the island but not without a considerable need for bravery, facing censorship at times.

An entire generation of artists, during the rule of the Rajapaksa regime, was repressed by fear, prompted by disappearances and unsolved assassinations

An entire generation of artists, during the rule of the Rajapaksa regime, was repressed by fear, prompted by disappearances and unsolved assassinations. With the country now facing the worst economic crisis in its history, the people have changed their stance thereby empowering the voices of artist communities throughout the country.

The most popular platform for this explosion of activist or protest art is social media, a space that provides the younger artist community with a solution to the sky rocketing prices of artist supplies subject to inflation and import taxes. Led by well-known emerging contemporaries such as Muvindu Binoy, Abdul Halik Azeez and Firi Rahman, younger artists have found a space for their work, and with increased engagement, an opportunity to use their art for a greater purpose.

With little or no state funding and a National Art Gallery that has been closed for more than five years, the art industry locally depends on a handful of galleries and private sector support to help it survive. With works by modern and contemporary Sri Lankan artists in permanent museum collections, such as Lionel Wendt at London’s Tate Modern and Chandraguptha Thenuwara and Jagath Weerasinghe at the Los Angeles County Museum of Art, there is no doubt that Sri Lanka has established its presence in the South Asian art scene.

Within the country, the corporate sector is just waking up to the industry’s growth and institutions are working on initiatives to build sustainable programmes. The hope of a promising future still looms, yet the real struggle for artists in the country goes beyond supplies and visibility; it is a struggle that involves hunger and poverty like no other faced by the country before.