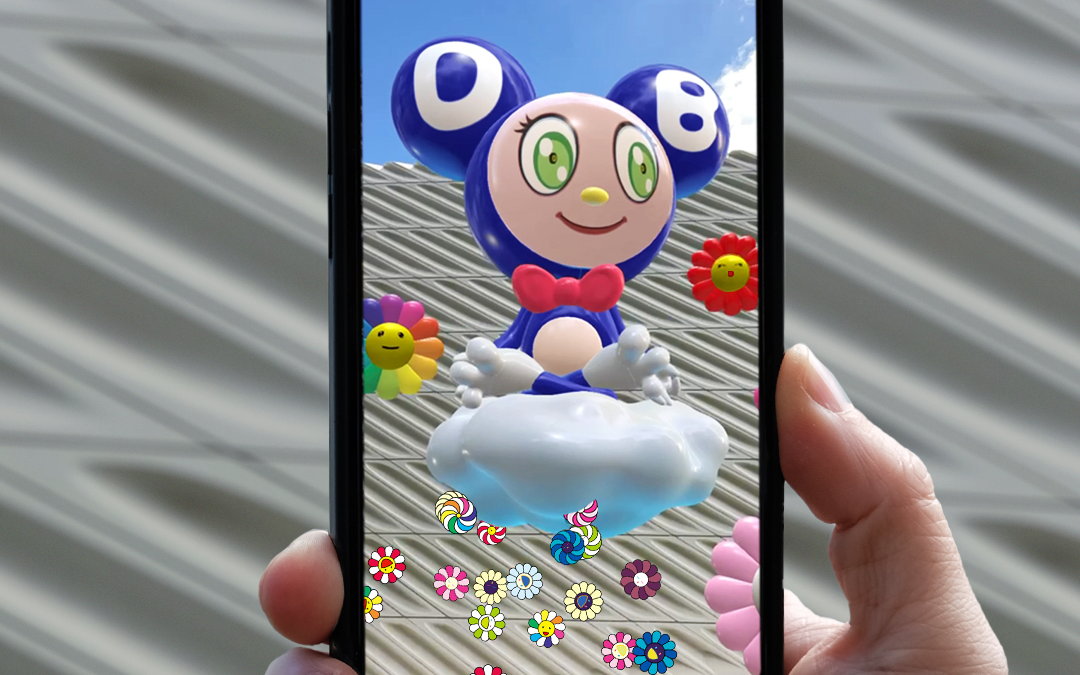 The new exhibition Takashi Murakami: Stepping on the Tail of a Rainbow (till Sept. 25) at The Broad in downtown Los Angeles begins outside. Visitors can scan QR codes on the sidewalk and conjure up two animated AR, or augmented reality, projections thanks to a collaboration with Instagram. One is floating over the lawn next to the museum: a giant and very 3D Mr. DOB, the creature with a spherical head and ears most associated with the artist himself. He is blinking and happily sitting on a cloud, surrounded by colourful, smiling flowers.

The other appears in a covered passageway where visitors line up to go inside the museum: a pile of those same flowers are winking and smiling overhead as you make your way to the front. The flowers are also quintessential Murakami, rendered large in his fine arts sculpture and paintings, and frequently replicated on T-shirts, caps, posters and even limited-edition Louis Vuitton bags that are collectors’ items. In actual and virtual forms, they are also part of the solo Murakami exhibition that recently opened at Gagosian New York recently.

It is The Broad’s first foray into AR, and Murakami’s first AR activation at an American museum, a way of attracting visitors, of entertaining those waiting in life and of amplifying their experience when they go inside. “I saw that Takashi had done some preliminary AR in Roppongi Hills, Tokyo,” says Ed Schad, the Broad curator who organised the exhibition, “That was an Instagram collaboration. As this exhibition developed, I approached him and said, is it possible to do a similar thing at the Broad?”

Within weeks, Murakami and his team began working with Instagram, who in turn hired the firm Buck, an animation and design studio based in Los Angeles, to put it together. “It was an extremely accelerated timeline,” says Jeni Wamberg, Buck’s creative director. “Normally, it’ll take us about six weeks to turn around one AR activation. Just one. In this case, we turned around six different AR activations, that were all museum-quality, in record time.” They started 12 April, with a physical visit to the museum.The locations were jointly selected, with key input from Schad, and five weeks later the activations were up and running. “We worked so closely with all the partners involved,” Wamberg says. “Meta (Instagram’s parent company) paid for everything, but they also provided the Spark technology.” [Spark is the platform running the AR activations.]

Dressed in an oversized, tailored grey jacket with camouflage trousers and orange sneakers, Murakami has come for the Broad preview, peering at the AR on a phone and at the artwork inside. Creating the ARs was facilitated by the fact that some assets were already available at Murakami’s studio, Kaikai Kiki, and passed to Buck. Still, there were difficulties working across two languages and two continents, Murakami says through an interpreter. “The language of AR technology is not something that I’m familiar with. And so the communication was very difficult and challenging.”

The AR segments inside are also 3D and animated. The first of which was at a curved wall leading to the exhibition. Two fierce traditional Japanese guardian figures that one might find flanking a temple entrance stand in individual alcoves cut into the wall. Further on, before the title wall, there is an AR version of Murakami and his pet Pomeranian welcoming visitors. Inside the exhibition is a long gallery with two more AR activations that appear on either side of paintings facing each other. These are of silvery manga-style figures, Hiropon and My Lonesome Cowboy, which rise up from holes in the floor. (These iterations have been sanitised. The original works were part of his “bodily fluids” series of the late 1990s.)

In the same room is the 82ft-long painting that gives its name to show, In the Land of the Dead, Stepping on the Tail of a Rainbow (2014) which was inspired by 18th century painter Soga Shohaku. Like Shohaku’s painting Gunsenzu (Immortals), the epic work features Daoist immortals with magical powers. Murakami created the epic work in acknowledgement of the disasters that befell Japan in 2011: the Tohoku earthquake, ensuing tsunami and Fukushima nuclear plant meltdown. On the left half of the painting is the big, black skull of death, while nearby an assortment of immortals cavort and ride in a ship amidst swirling waves. The right half shows full length portraits of these grotesquely humorous demigods playing instruments, holding babies, luxuriating in indolence.

The exhibition includes 18 works, 12 of which, including In the Land of the Dead, are from the Broad’s own collection. The rest are on loan. The museum also owns DOB in the Strange Forest (Blue DOB) (1999), an installation of a fully dimensional Mr. DOB surrounded by colourful mushrooms, on the left as you enter the exhibition.

Murakami says he’s pleased with the results and thinks the AR segments will draw people into the work. “For people who are not really familiar with my art, maybe it’s hard to understand fully,” he says. “So, I thought having an AR component would sort of widen the entry point. I think as a first step of communication, it’s a great thing.”