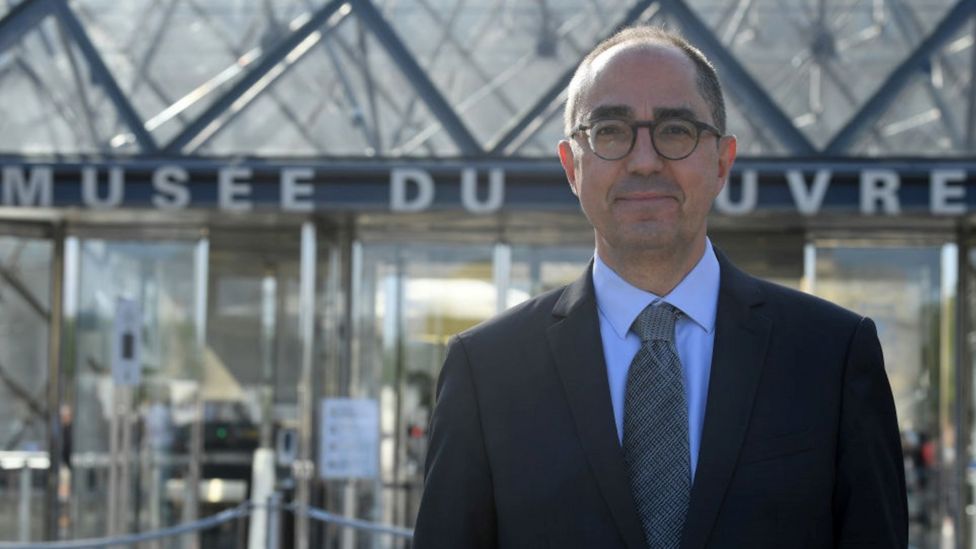 The Louvre Museum has decided to become a civil party in the wide-ranging criminal investigation into the alleged trafficking of ancient objects from the Middle East. The decision was made in connection with “the purchase of Egyptian antiquities by Louvre Abu Dhabi”, according to a statement from the institution.

It adds: “The Louvre would like to emphasise the utmost, unwavering and ongoing commitment of its scientific experts in the struggle against illicit artwork trafficking. The work accomplished at both a national and an international level remains a priority in order to thwart ever more active and increasingly organised crime.”

The action comes after the Louvre’s former director Jean-Luc Martinez was charged with “complicity of fraud and laundering” of antiquities allegedly smuggled from Egypt and purchased by the Louvre Abu Dhabi.

Martinez, who ran the Louvre between 2013 and 2021, has “vigorously denied” all allegations and, via a statement from his lawyer, François Artuphel, “expressed his confidence that he will be completely cleared” of the charges laid against him. Martinez, who is now the French ambassador for cultural heritage, was charged last week after three days of questioning by the French Office against Art Trafficking. He has since been unconditionally released. The Culture and Foreign Affairs ministries have not yet responded to the allegations.

According to a source close to the investigation, French investigators are travelling to New York this week to hear evidence from several witnesses, including representatives of the Metropolitan Museum of Art. They will exchange information with Matthew Bogdanos, the chief of the antiquities trafficking unit of the District Attorney’s office, which initiated the trafficking investigation in 2013, leading to the return to Egypt of a golden sarcophagus purchased by the Met. The coffin was sold for €3.5m in 2013 by the French expert Christophe Kunicki who was charged two years ago in Paris for criminal conspiracy, gang fraud and money laundering. His alleged accomplice, Roben Dib, the manager of the Dyonisos Gallery in Hamburg, which is owned by dealer Serop Simonian, has been detained in Paris since March on the same charges.

According to legal sources, Martinez stands accused of dismissing doubts expressed in 2019 by an Egyptologist concerning the provenance of a rare stele bearing the name of Tutankhamun, which was sold by Kunicki three years before to the Louvre Abu Dhabi. Kunicki provided documents claiming the stele had been exported in 1933 by a German navy captain named Johannes Behrens.

The Egyptologist Marc Gaborde tells The Art Newspaper that he was troubled because he could not find any reference to this name in the registers of the merchant navy and he “wonders, without certainty, if the character might have been invented”. He maintains “the curators and Martinez were certainly not accomplices but victims of thugs”.

As the head of the Louvre, Martinez co-chaired the bilateral acquisitions committee of the Louvre Abu Dhabi museum. According to a source close to the Louvre, though, Gaborde’s “doubts were rather vague and, in any case, neither Martinez nor the Louvre were legally responsible for the sale and the ownership of the object, which were the full responsibility of the Emirati State”. The source adds: “Egypt has not made any claim for restitution, although these antiquities have been on display” since the inauguration of the museum, designed by Jean Nouvel, in 2017.

The Louvre Abu Dhabi declined to make any comment, although according to French newspaper Libération, an internal audit has revealed flaws in the provenance of some Egyptian antiquities purchased from Kunicki.

According to Bogdanos’ reports, Kunicki, Dib and Simonian are part of “an international antiquities trafficking ring” which has been under investigation for the past nine years. Bogdanos claims having evidence that local thieves in the Middle East used to “email photographs of dirty and damaged antiquities to Dib and Simonian”. He says Dib then “generally consulted Kunicki in deciding whether to purchase an object”. “The piece was then smuggled”, often via Dubaï, to Hamburg, where it was restored. According to Bogdanos, “Dib created false provenances and ownership histories to sell the objects on the international art market. Typically, Dib claimed the antiquities had been sold by Egyptian exporters to German collectors or to the Simonian family“ using “forged documents”. “Ultimately, Dib then sold newly laundered antiquities through Kunicki or the Paris-based auction house where Kunicki worked, Pierre Bergé.”

The accusations have been denied by Dib and Simonian, who tell The Art Newspaper they were “unable to present their defence in the face of these blatant lies” from a “crusader against the art market”. When the Met’s golden sarcophagus was returned to Egypt in 2019, Kunicki told us he had “all the legitimate documents for its export”, but, since then, neither he nor his lawyer have responded to requests for more information.

In Paris, the prosecutor’s office claims the trio’s sales to the Metropolitan Museum and the Louvre Abu Dhabi amounted to almost €60m.

The treasures in question

Sales documents establish that from 2013 to 2015 the New York museum bought, through Pierre Bergé house, a Fayum portrait of a lady for €1.5m, five fragments from the Book of Exodus painted on linen for €1.3m, a limestone model of a chapel dedicated to Kemes, patron of the musicians, for €250,000, and a stele representing a singer in front of an offering table to the god Hathor (€50,000). All these pieces were put up sale by Dib.

The Metropolitan Museum declined to comment on the fate of these items, but they have now been withdrawn from its online catalogue. However, a spokesperson claims that its “employees were deceived by this criminal conspiracy and the museum has been fully co-operative throughout this investigation and will continue to be so”.

The Louvre Abu Dhabi purchased six objects directly from Kunicki for a total of more than €50m. According to a source close to the Louvre, “Kunicki’s contacts with Abu Dhabi started after the sale of the Fayum portrait to the Met, when he proposed an ‘even more striking one’ to the Emirates”.

In 2014, the museum subsequently purchased a Fayum portrait of a man for almost €2m and the spectacular funerary ensemble of a princess from the 22nd dynasty, for €4.5m. In 2015, it bought a small blue glazed hippopotamus for almost €1m and a model of a funerary boat for €200,000. In 2016, it purchased the Tutankhamun stele for €8.5m.

But the top lot was the colossal marble head of a Ptomelaic queen who might be Cleopatra, bought in 2018 for more than €35m, and which Kunicki had displayed in his luxurious apartment on Avenue Montaigne in Paris. The head is 70 cm high, meaning the whole statue of Egypt’s celebrated final sovereign could have been more than five metres tall. The Art Newspaper has found the catalogue that Kunicki published for its sale. It gives no indication of the place and date of discovery or its history since then. It only mentions a text attributed to German Egyptologist Günter Grimm, who died in 2012, claiming the head had been “known to him since 1971 or 1972” and another by scholar Robert Steven Bianchi, describing it as the “only complete image of Cleopatra on a monumental scale”. One expert told us “a dealer had shown him the head in Germany in 2008, therefore it was not looted during the Egyptian revolution”. The Tutankhamun stele was also seen in 1998 in Basel by the late French scholar Jean Yoyotte, according to notes he left to the Society of Egyptology.

“All provenances were duly checked by the Louvre teams,” insists a source close to the museum, “but it is hard to tell if some documents could have been forged, as claimed by the American investigation.” According to purchase sheets, in some cases, the object was presented by Kunicki as coming from Simon Simonian, Serop’s brother, who allegedly bought the stock of a Cairo dealer named Habib Tawadros. The same provenance was given for the Met’s sarcophagus. Another origin stated by Kunicki is the collection of a merchant, Sayed Bey Kashaba, that a Simonian brother, Hagop, was allowed to export in the 1970s, according to Kunicki. Numerous other dealers, collectors or even museums in Germany are also named in these provenances.

Kunicki produced a certificate signed by a former curator, Michaël Hoveler-Müller, stating that the Tutankhamun stele and the princess’ sarcophagus were entrusted to the Egyptian Museum of the University of Bonn years before 2010 (the museum did not reply to our queries).

The criminal investigation must now prove that these items could have been smuggled from a country which banned trade and exports of antiquities in 1983.