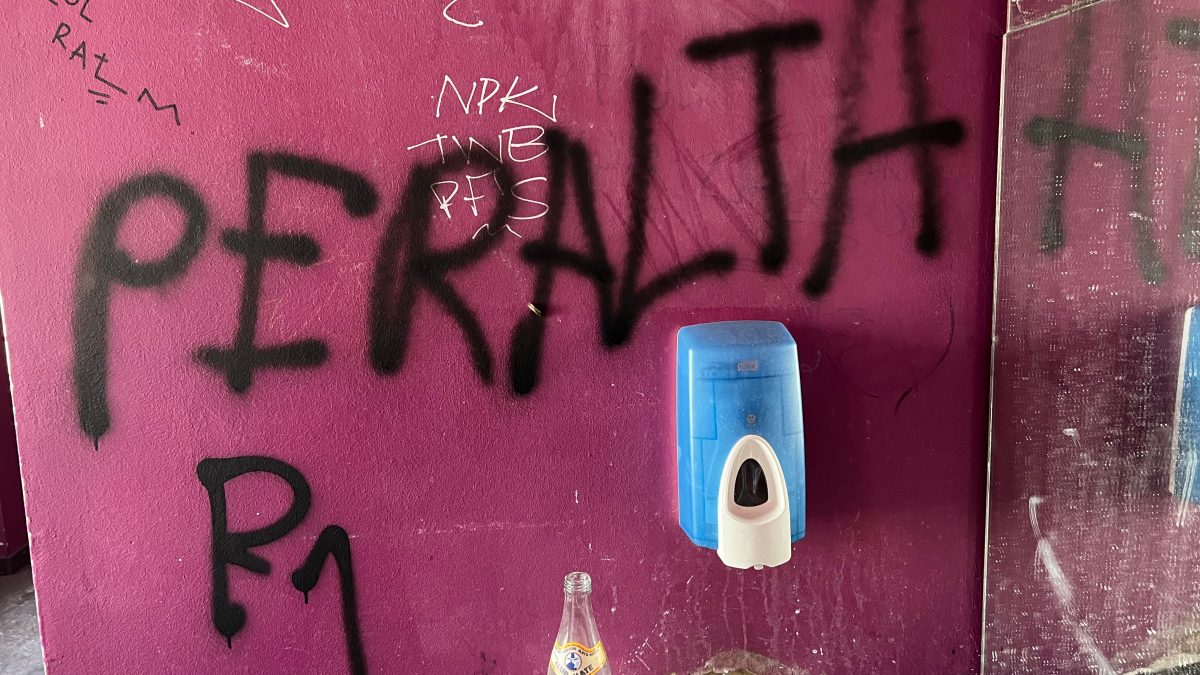 In what is being described as a politically motivated attack, vandals have targetted the exhibition space of a Palestinian artist group taking part in Documenta 15. The incident is being considered in relation to a mounting antisemitism row surrounding the quinquennial exhibition in Kassel, which opens on 18 June (until 25 September).

The pro-Palestine stance of artists from the participating group The Question of Funding, as well as the Palestine-based organisation Khalil Sakakini Cultural Center, has caused the Alliance Against Anti-Semitism Kassel to speak out against the exhibition for involving “anti-Israeli activists” and violating Germany’s strict antisemitism laws. Talks that would, in part, address these accusations were cancelled last month after further complaints by the Central Council of Jews in Germany to the country’s culture minister Claudia Roth.

But despite the wishes of Documenta’s artistic directors, the Indonesian artist collective ruangrupa, to peacefully resolve the situation, it seems to have only worsened. On 27 and 28 May, the Kassel exhibition space of Question of Funding was broken into and vandalised with graffiti that has been interpreted as Islamophobic and containing “cryptic death threats”, according a statement released by Documenta today.

These include the number “187”, a number used in the Californian Penal Code to refer to “murder”. The word “Peralta” was also spray painted, which the Documenta organisers suspect is a reference to the Spanish fascist politician Isabelle Peralta. Wall surfaces were also damaged with a fire extinguisher.

The news of the vandalism was first broken in a letter published via Facebook on Sunday and shared by around 45 artists, writers and curators, including the South African artist Candice Breitz and the Turkish-born conceptual artist Ahmet Ogut. The source of this initial written statement remains unknown, but Breitz says that they are “trusted insiders to Documenta who would be at risk if they named themselves”. She adds that “you can be ex-communicated professionally and personally in Germany for taking a stance on such matters” and assures that the authors of the letter are “informed and 100% credible”.

This is not the first racially charged incident to occur against Documenta’s organisers. In April, a number of stickers reading “Freedom not Islam! No compromise with barbarism! Fight Islam consistently!” and “Solidarity with Israel” were affixed to the front of RuruHaus, an exhibition space in a former department store being run by ruangrupa for the duration of the exhibition.

Documenta has filed a criminal complaint regarding this week’s vandalism incidents and the Hesse State Police are now investigating damage to the property at Werner-Hilpert-Straße 22, which it estimates at “several thousands euros” according to Berliner Zeitung. The police say that “political motive cannot be ruled out”. In 2021, 20 police officers from Hesse were investigated for links to the far right.

“Artists are highly alarmed for their safety in this environment, given the recent history in Kassel of murderous racism and organised far-right extremism,” continues the Facebook letter, likely referring to the 2019 murder of former district president of Kassel Walter Lübcke, which German authorities suspected as politically motivated and linked to his pro-immigration and refugee stance.

According to Documenta, its exhibition staff will be receiving special training in light of these incidents, and security staffing at exhibition locations will also be increased.

Nevertheless, these attacks have drawn concern from a number of art world professionals who were intending to visit the show. “This is spiralling wildly out of control”, writes the curator Lorenzo Fusi in the comment section of the letter. “What a terrible environment for work to reflect and meet”.

Addressing how dramatically the antisemtism row has escalated, the Facebook letter places significant blame on the German media, which it claims has “pandered to the Israeli regime”. “Mainstream Germany is only willing to align with conservative Jewish positions”, Breitz also writes in a comment on the thread. One commentor, however, points out that no Israeli artists have been invited to Kassel for the exhibition.

“We consider the vandalist acts as a politically motivated threat […] as an attack on all of us,” say the organisers of Documenta in a statement. “We are wishing for a working atmosphere where acts of violence towards the artists’ persons, venues, and artworks cannot be tolerated.”

This position is reiterated by Kassel’s mayor, Christian Geselle, who says in a statement: “Having discussions about Documenta 15 is one thing, but intimidating artists by committing crimes goes far beyond the pale and damages the image of the city of Kassel as a place of artistic freedom and host to artists from all over the world. Here, all those involved should become aware of their responsibility and stand up for a common coexistence.”