Willem de Kooning’s Woman-Ochre, missing for 30 years after a heist, returns to public view at the Getty Center in Los Angeles this summer 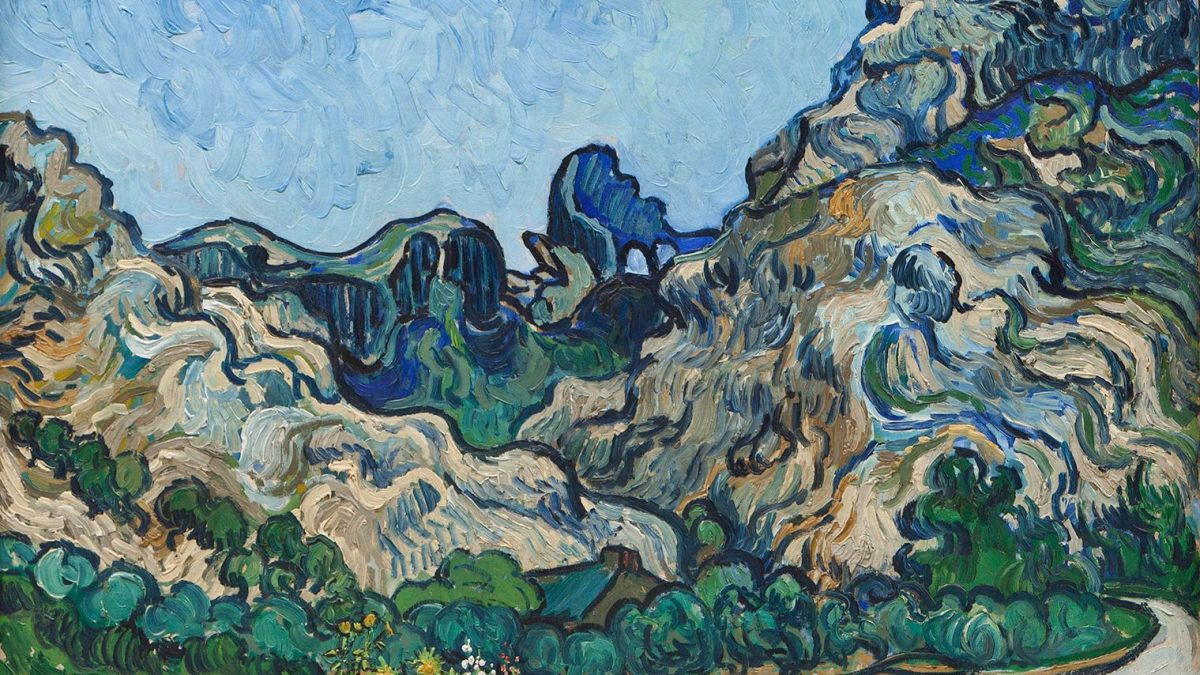 The bizarre forms in Mountains at Saint-Rémy (July 1889) are often assumed to reflect Van Gogh’s tortured mind. But in fact the artist has brilliantly captured the contortions of the strange peaks of Les Alpilles in southern France.

In the centre of the artist’s composition he has included a weathered limestone feature known as Les Deux Trous (The Two Holes), a name that aptly describes a crest which has been punctured by rain and wind.

Van Gogh had arrived at the asylum just outside Saint-Rémy-de-Provence in May 1889, a few months after mutilating his ear in the Yellow House in Arles. Initially he was confined within the asylum’s walls, but a month later he was allowed out for a few hours each day to explore the dramatic landscape—and to paint.

Coming from the flat Netherlands, Van Gogh regarded Les Alpilles (the small Alps) as mountains even though, at a height of just under 500m high, they should really be regarded as mere hills. But for Vincent, they were the highest elevations he had ever seen.

Vincent wrote to his brother Theo in mid July 1889 about Mountains at Saint-Rémy: “The latest canvas I’ve done is a view of mountains with a darkish hut among olive trees at the bottom.”

He explained to Theo that he had been partly inspired by a passage in a newly published novel by the Swiss-French writer Edouard Rod, Le Sens de la Vie. Rod referred to the homes of mountain dwellers: “Their wooden huts are small and dark, meagre against the terrible cold of their winters”, adding that in their small gardens “sway scarce sunflowers”.

In the painting, the lone farmhouse nestles in an olive grove. Van Gogh duly added several of his beloved sunflowers in the foreground, along with other blooms. The other white flowers were once pink, but his red pigment has disappeared (fading of Van Gogh’s colours is a widespread problem).

Mountains at Saint-Rémy was painted around ten minutes’ walk from the asylum’s gate, on the road that ran southwards over Les Alpilles.

A postcard of around 1905 shows the view. The roof of the farmhouse in Van Gogh’s painting can just be made out on the left, nearly hidden behind vegetation. A few of the paving stones over a roadside ditch that appear in the painting can also be seen in the postcard.

In the background of the postcard the dominant mountain with three peaks is Mont Gaussier (Van Gogh depicted only the two left peaks in his painting). Les Deux Trous can just be seen in the postcard, in the far distance, to the left of Mont Gaussier.

By the early 20th century it was realised that the extensive ruins of the Roman city of Glanum lay buried beneath the area in the foreground of the postcard. The site was excavated in the 1920s, leading to the demolition of the farmhouse and the moving of the road slightly to the west.

Sadly, Van Gogh suffered a severe mental attack on 16 or 17 July, just two days after completing Mountains at Saint-Rémy. While working nearby he was suddenly overcome and ate some of his paints.

Van Gogh vomited, but his throat quickly became very badly swollen. For four days he was in agony and unable to eat, and even a month later, after the crisis was abating, he still found it painful to swallow. Acknowledging that he had attempted suicide, he explained that “finding the water too cold”, he was struggling “to catch hold of the [river] bank again”.

It can be dangerous to read too much into Van Gogh’s mental condition from his carefully crafted paintings, but perhaps something of the controlled energy behind Mountains at Saint-Rémy mirrors the intensity of his thoughts at this time.

After his recovery, Vincent sent Mountains at Saint-Rémy to his brother Theo in Paris in September 1889. In June 1890, a month before Vincent’s suicide, Theo offered the Saint-Rémy landscape to their Belgian artist friend Eugène Boch, as part of an exchange. In return, Boch gave the two brothers a picture of the exterior of a coal mine in the Borinage.

The Boch painting had a particular personal significance for Vincent, since before he set out to become an artist he had served as a missionary among the Borinage coal miners.

Boch sold Mountains at Saint-Rémyin 1908. Five years later the new owner lent it to the landmark exhibition of Modern art held at the New York Armory. The painting was bought in 1929 by the US dealer Justin Thannhauser, who kept it in his personal collection.

Thannhauser lent a large group of paintings, including the Van Gogh landscape, to New York’s Solomon R. Guggenheim Museum in New York in 1965. Two years after his death in 1976 Mountains at Saint-Rémy was bequeathed to the museum, where it remains as one of the highlights of the Thannhauser collection.


A very short letter from Van Gogh, which sold for €93,600 ($103,000) at Aguttes in Paris on 5 April is being auctioned again, just two months later, this time by Boston-based RR Auctions. It is now estimated at $200,000-$300,000, which with the buyer’s premium would be more than double or triple the April price. Presumably the April buyer thought they had bought it for a bargain price and wanted to realise a profit.

The letter, dated 2 September 1875, was sent to Egbert Borchers, a civil servant and friend in The Hague. It has only six sentences (160 words) of text—and no mention of art. If it sells for its mid-estimate on 15 June, the bidder will pay (with buyer’s premium) nearly $2,000 a word.