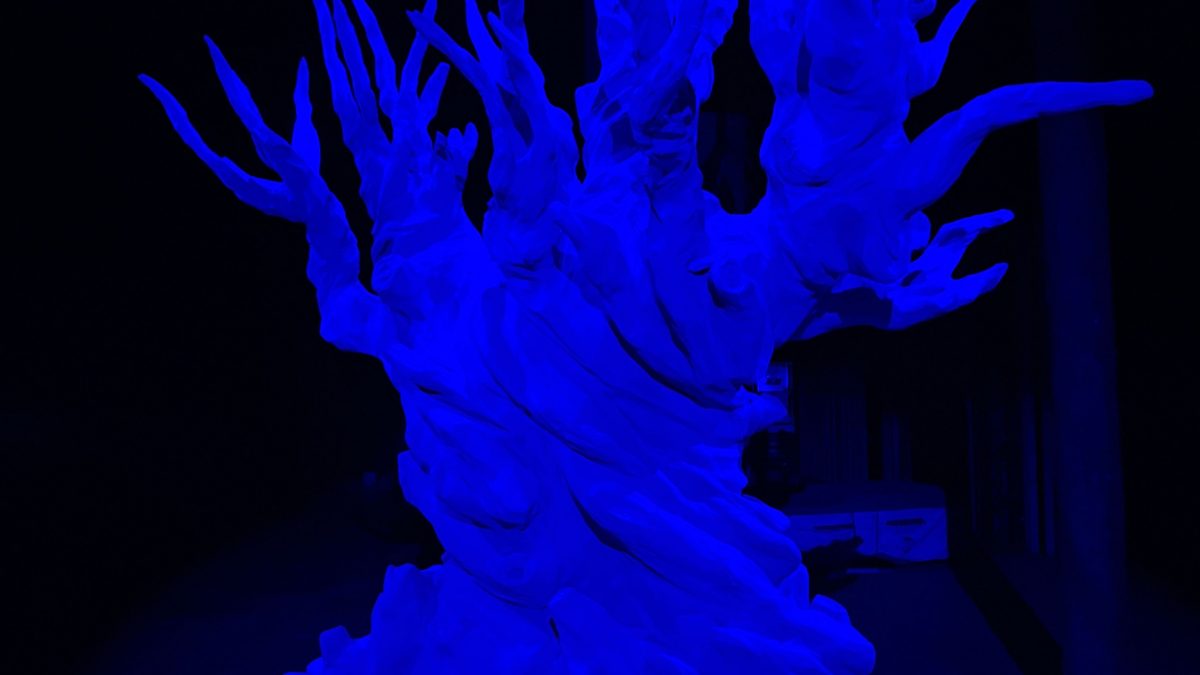 Artist Glenn Kaino has always enjoyed a good magic trick. He especially liked the one in which the magician tore up a newspaper into bits, then held the bits together, and presto! unfolded an intact newspaper. Years later, a magician friend explained to Kaino what was compelling about that sleight of hand. “He said that piece is about resurrection,” the artist says, standing outside the Los Angeles warehouse that has been taken over for his latest art installation A Forest for the Trees, “He says that piece is about hope.”

Hope, especially hope for our ability to see and to change, is threaded throughout A Forest for the Trees, a large, immersive experience with a strong ecological theme. It was produced by the venerable Atlantic Monthly, through its division Atlantic Ventures, and the upstart Superblue, which specializes in immersive installations by name-brand artists (works by James Turrell and Teamlab currently headline their Miami location). This exhibit is the Atlantic’s first step into the world of immersive experiences and Superblue’s first foray into Los Angeles.

“We at the Atlantic have always been enthralled by that Transcendentalist founding [of our magazine], the relationship between humans and nature,” says Brad Girson, executive director of Atlantic Ventures. “It’s so urgent now, as we experience this massive story of climate change.” They brought on Superblue to help them create the project. Kathleen Forde, the chief curator at Superblue, quickly thought of Kaino, with whom they had previously worked and who already had deep environmental concerns.

“I have long been interested in social justice and climate justice,” says Kaino. For the last decade he has also been “experimenting with non-traditional formats for artistic production”. After he signed on to the project, he acknowledged the first peoples of this continent by tapping a number of Native Americans to help him shape the story. One of the first he contacted was the social activist Laundi Keepseagle of the Standing Rock Reservation in North Dakota. Another was Bill Tripp, a leader of the Karuk tribe in Northern California.

The first part of the exhibition is guided. Visitors enter a dark room, a voiceover narration begins, and corresponding wall panels light up. They are told a story from the Karuk people, about how they modulated the environment through controlled burning. It is a practice said to conserve water by eliminating smaller plants and putting a temporary coating on the leaves of the trees that remain, cutting down their water consumption.The illustrations are by the Ukrainian artist Kirill Yeretsky, in a dramatic woodcut style that references the look of old fairy tale illustrations. At the closing the narrator says, “You are about to enter a symbolic forest within which we can invent real systems of justice for our planet together, for each other, and for the revitalization of the practices and principles employed by indigenous peoples for millennia.”

In the second room, a live guide asks visitors to stare at a spiral-patterned disc on the far wall. It is spinning and spinning, and before long you feel like you are being pulled into a tunnel. After a minute you are asked to hold up the palm of your hand and stare at it–– the lines in your hand look like they are pulsating. Yes, it is an optical illusion, but quite enjoyable, nonetheless.

When you get to the main room, you are on an elevated walkway surrounded by reclaimed tree trunks.You can step to three side areas. The first is an “infinity” well which you can look into. It seems to drop forever, an effect done with mirrors. Next is an imagined bristlecone pine tree that was ancient but felled in untimely fashion due to human carelessness, a true story told by one of the robotic heads mounted on a nearby tree trunk. These robots also tell you facts about trees and bad jokes. “Don’t get sappy on me,” one says. The third area has an altar-like table that looks like it is on fire, an illusion created by water vapor and coloured lights.

At the end of the path is a large clearing where visitors can sit on giant logs around a large fig tree. This 140-year-old tree has been reassembled from an actual tree which had long graced El Pueblo de Los Angeles, the historical centre of the city, before it fell in 2019. Kaino came upon it rather serendipitously, during a visit to a local lumber yard.When he heard where it was from–the place where the city sprung, the plaza where weddings and celebrations regularly take place–he knew he had to have it. In the show, the trunk has been set upright, and boasts branches and leaves made up of a gridded framework with panels that cycle through a range of colours. The work, appropriately, is called Resurrection.

“Audiences have, in the last couple of years, really been looking more for experiences, wanting a shared experience as a collective,” says Forde, who was part of the team that started the Superblue space in Miami. Her job, she says with some pride, is to find projects which are “meaningful and thoughtful, but at the same time spectacular.” The show will be up for at least six months, and they intend to draw a large audience, well beyond the art world. “You know, it’s the spectacular and the immersive that draws a broad audience,” she says, “Then once they’re in the space, people realize that there’s a more complicated story to unfold.”