American museums try to cash in as deaccessioning truce expires

The Marcos art mystery: with a new Philippines president, we ask what happened to the family’s Van Gogh? 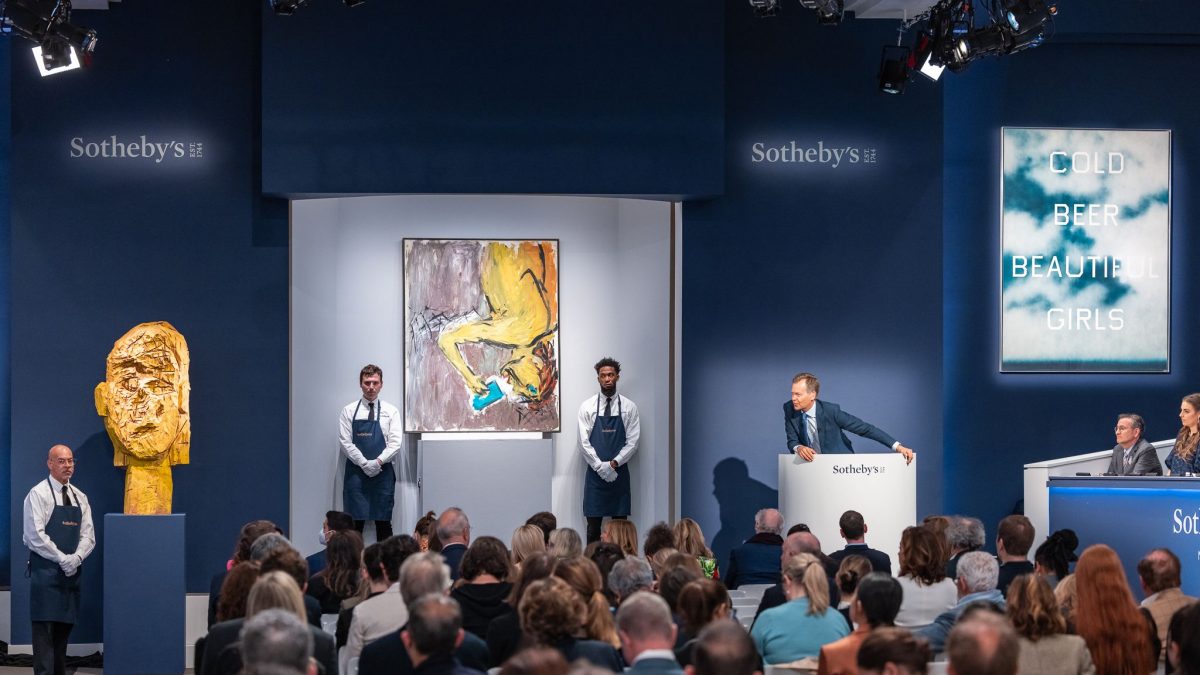 Both sales had significant irrevocable bids and house guarantees, somewhat securing the high numbers. The Now sale kicked off with seven guarantees and irrevocable bids, estimated between $15.95m and $22.8m, while the Contemporary sale ran with eleven combined guarantees valued at $119-180 million. (Typically guarantees are pegged at the low end of estimates.) More impressively, eleven artist records were set during the combined sales, nine in The Now portion of the evening and two during the Contemporary sale.

In a darker mood, Remorse, Philip Guston’s hood draped figure, partially illuminated by a cord hung bare light bulb, from 1969, realized $6.5m ($7.8 with fees, est. $5m-$7m). A second, later work by Guston, the 1978 canvas Celebration which is emblematic of the artist’s post Ab-Ex, cartoon influenced style and shows his outraised hands with a smoldering cigarette over a pastiche of painting cans and bottles, sold to a telephone bidder for $4.25m ($5.2m with fees, est. $5m-$7m).

A quartet of works in different media by Georg Baselitz from the collection of Hardie Beloff was led by Women of Dresden-Visit from Prague, a roughhewn carved head in ash wood painted bright yellow that shattered expectations by charging to a record $9.5m ($11.2m with fees, est. $3m-$4m). A second Baselitz from the group, Falle (Trap), from 1963, a striking expressionist view of a seated figure, one of the artist’s invented cadre of heroes and anti-heroes, leaning against two limbless trees with blood staining his fatigues, realized $7m ($8.36m with fees, est. $8-$12m). The seller acquired the painting in 1986 from the famed and now long shuttered Galerie Beyeler in Basel.

The back and forth play between European and American masters carried on with Cy Twombly’s sublime blackboard painting, Untitled (1969), grandly scaled at 78¾in by 93½in, made $35.5m ($38m with fees, est. $40m-$60m). The work came backed by a so-called irrevocable bid and looked like it needed it despite ranking high in Twombly’s oeuvre, with its looping, intertwined lines of graceful marks resembling someone entranced, with chalk in hand, effortlessly writing on a classroom blackboard. The illusion of the chalk lines comes from the artist’s alchemical mix of oil based house paint and wax crayon on canvas. Still, the painting slipped by with scant bidding and went to the irrevocable bidder.

Unlike the Now portion of the sale, with its electrified bidding, bevy of women and artists of color, the second act, with a few notable exceptions, was dominated by older or long-gone white males.