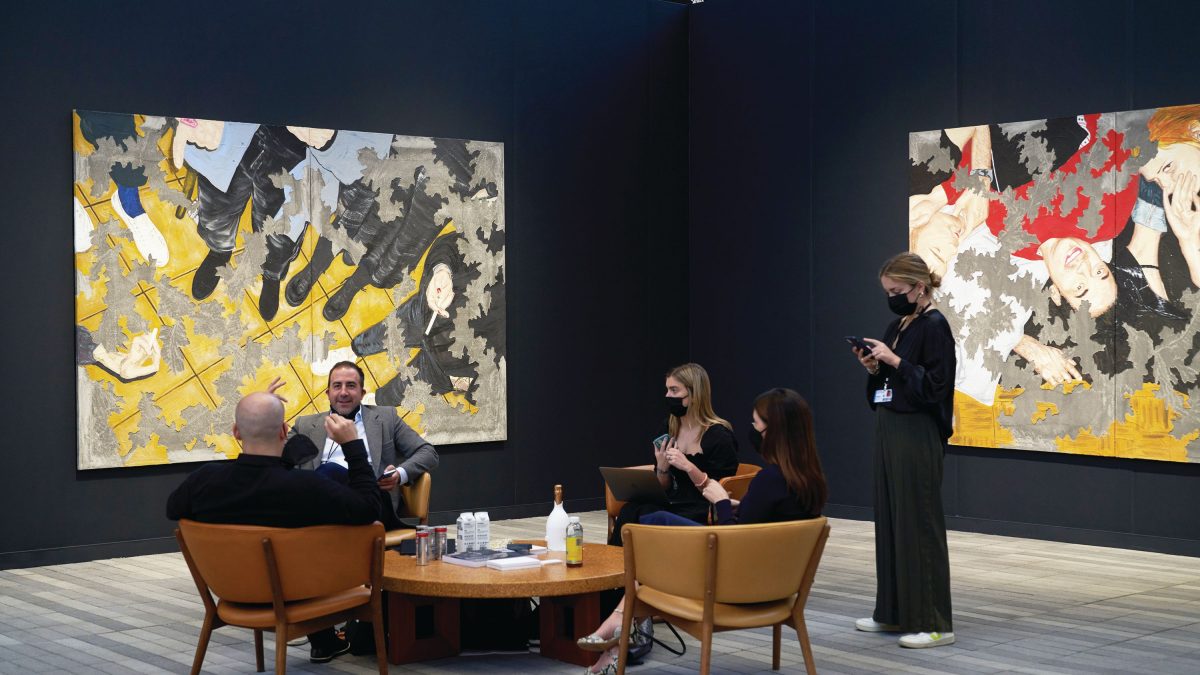 More so than in previous editions, Frieze New York’s programme this year embraces a call for diversity and progressive values that has been echoing through the 24-hour news cycle. It is hard to say if exhibitors planned to rally around new fair director Christine Messineo’s politically tinged programming, but there is no question that the atmosphere is more than contemporary. It is positively current, with multiple presentations reflecting present-day news whether they meant to or not.

Some do so with tongue planted firmly in cheek, such as Albert Oehlen’s vending machine on Gagosian’s stand, which dispenses bottles of a limited-edition coffee-tea hybrid in a subtle nod to art-world commercialism and persistent global supply chain issues. Others, like Pace’s solo stand of new works by the Morocco-born, Switzerland-based Latifa Echakhch, feel more resolutely anchored in the present. Based on images by her friend, the photographer Sim Ouch, Echakhch’s large-scale frescoes depict once-familiar nightlife scenes from New York’s Lower East Side, of skinny-jean-clad partygoers mugging for the camera.

The revelry, however, is fleeting. The frescoes, made on canvases treated with a mix of cement and vinyl glue, have been cut into and scrapped, leaving only fading memories of wild nights. After New York City health officials on 17 May put the city on “high Covid alert”, one wonders how long the regained ability to eat, drink and dance indoors with abandon will last. A Pace spokesperson says several of the works sold on VIP day, priced between €120,000 and €180,000.

With the US Supreme Court expected to overturn Roe v. Wade, the landmark decision guaranteeing abortion rights, Michael Rosenfeld Gallery’s solo stand of works by Nancy Grossman, all of which explore the artist’s feelings about the human body, shows how one woman uses art to dispel the frustration of living in an unjust world. Besides the leather-wrapped heads for which Grossman is best known, the stand is filled with gestural drawings and studies of the human form, most of them in some way bound or tethered while still under immense dynamic tension. The works vary in price from $35,000 to $350,000.

Although that link to Roe was not deliberate, Trigger Planting (2022), a garden installation on the fourth floor landing by the collective How to Perform an Abortion, speaks directly to the implications of Roe v. Wade being overturned.

These sound like US issues, which would make sense given that roughly half of the exhibitors at the fair are based or were founded in New York. But there are global concerns on display as well. At Proyectos Ultravioleta’s stand, a video-heavy presentation of works by the artist duo Basel Abbas and Ruanne Abou-Rahme comments on the political issues and injustices that surround Palestine in a way that speaks not only to struggles in the Middle East but across cultures. In one work, fragments of Edward Said’s text After the Last Sky (1986) are repurposed to form a poetic script that the artists sing while multiple avatars take their place on a flatscreen. While the avatars are all based on people who participated in the Great March of Return protests in Gaza in 2018 and 2019, their almost-malleable faces could stand in for anyone who needs support, who suffers or whose message longs to be heard.