The Marcos art mystery: with a new Philippines president, we ask what happened to the family’s Van Gogh? 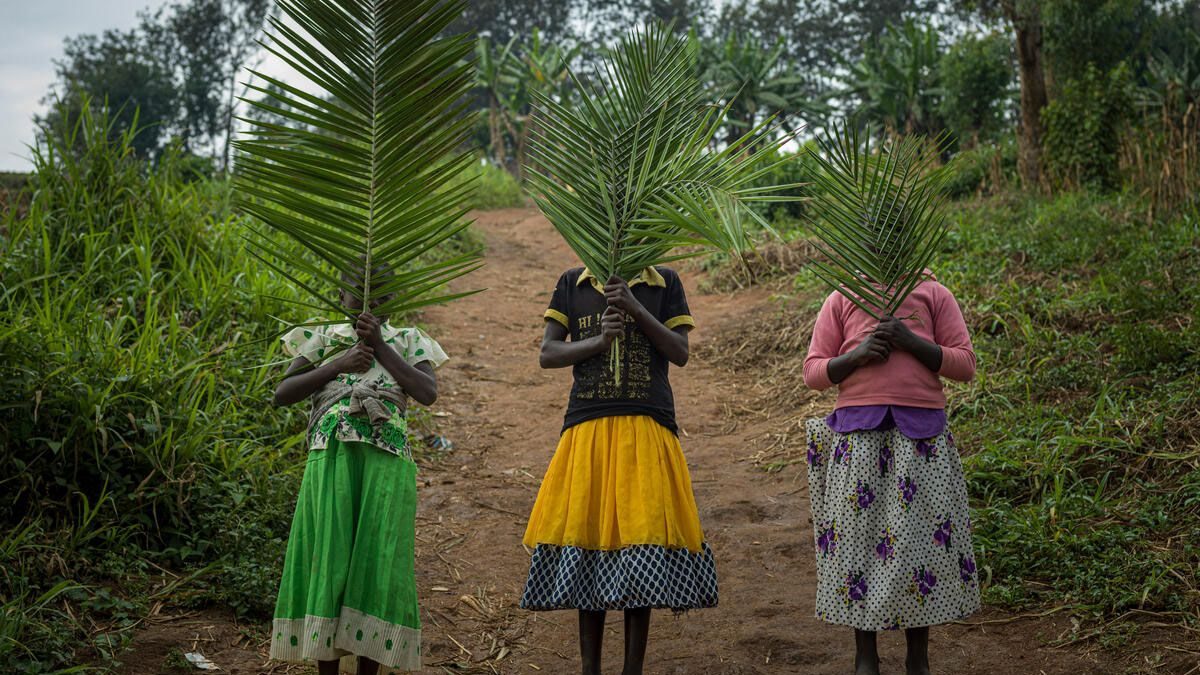 The celebrated Iranian photographer Newsha Tavakolian has defended herself against accusations of unethical practice after publishing a series of identifiable images of African teenage rape survivors made while on assignment for the international humanitarian organisation Médecins Sans Frontières (MSF).

On 25 August 2021, Tavakolian, 41, a Magnum Photos member and one of the foremost female conflict photographers in the world, published on the non-governmental organisation’s (NGO) websiteIturi, A Glimmer Through the Crack, a series of photographs she created over a four-week period in March 2021 in the war-torn Ituri province in the northeastern reaches of the Democratic Republic of the Congo. The series focused on female victims of sexual violence and included several fully identifiable photographs of a 16-year-old teenage girl from a remote Congolese village.

MSF posted the photoessay alongside a first-person article co-written by Tavakolian; the series was then shared on Magnum’s site on 21 April 2022 and has since come under the scrutiny of prominent photography activists on social media.

The images of the girl, as well as those of other survivors of rape included in the series, are deeply problematic, the activists say, as the women in question were unable to provide Tavakolian or MSF with informed consent.

Photographer Jason Tanner, a human rights photographer and teacher who has previously worked for MSF, said to The Art Newspaper: “These images will exist, in perpetuity, on the web, identifying them as child survivors of rape. How does a child, in Ituri, fully understand that? Does MSF not believe these stories can be told without resorting to images of fully identifiable child survivors of rape?”

On 13 May, MSF deleted five images from the series, including the images of the girl in question. In a statement to The Art Newspaper, an MSF spokesperson pledged to “review our audio-visual guidelines and their implementation, in order to avoid misjudgments in the future.”

“Safeguarding is paramount to Magnum Photos and we welcome these important ethical debates,” says a spokesperson for Magnum Photos in a statement to The Art Newspaper. “In this case, we are satisfied that Newsha’s photos and her account of her trip to the Democratic Republic of the Congo with MSF is consistent with our code of ethics and that, given the specific context, she acted in line with the expectations of Magnum Photos, and with consideration to the people she photographed.”

In the essay written alongside the photo assignment, Tavakolian writes of the images of the girl: “Two months ago, as she was fetching water along with five other women, [the girl] fell behind because she was walking slowly with the heavy jugs. That is when she was grabbed by three armed men [and raped].”

Tavakolian first met the girl in question in a health centre affiliated with MSF close to her village. The girl had travelled there after hearing of Tavakolian’s presence; she did so with the express wish of giving testimony, Tavakolian tells The Art Newspaper. “She wanted to speak out and tell her story,” Tavakolian says. “She was determined to do so.”

Tavakolian says she is disappointed that MSF have deleted the images of the girl. “I continue to defend my decision. Because, on the ground, and through my encounter with [the girl], I saw a specific kind of determination in her, as someone who could not rely on a legally viable adult to share the truth about her. That is why I included her story,” she says.

Before the picture was taken, health and wellbeing assessments were made, Tavakolian says.“There were prior conversations with the medical and psychology teams,” she says. “After we took the picture, an expat MSF communication officer and I again explained to [the girl] that her image might be used. She signed a consent form that was translated for her by a local translator who was accompanying us.”

Tavakolian says the images were made in full collaboration with the girl, who could provide agency over their creation and publication. “Who could she ask permission from?” Tavakolian asks. “She has no parents and is taking care of her siblings […] To me, she isn’t a typical 16-year-old, living a child’s life in a world of comfort. No, she lives in East Congo, in an area where rape is an instrument of war.”

Tavakolian admits she grappled with the ethics behind the picture. “As for agency, this is a thin line; who has the agency for others?” she asks. “For me, this is more about empathy. Should I tell her to walk back home without having told her story because she had no parents to give her consent? No. By my judgment she was powerful and strong and wanted to speak out and tell her story.”

Tavakolian reveals to The Art Newspaper she has been a victim of sexual abuse in her life and career. “While my experience is incomparable [to that of the girl in question], I can understand that life can be difficult at an early age,” she says. “When I was 16, I was working as a photographer in Iran documenting key political events. I also—like many women—have had to deal with sexual abuse. I look at [the girl] and those like her in a way I personally can relate to. We both had to fight at an early age and this makes us grow up quicker.”

Speaking to The Art Newspaper, the leading human rights lawyer Sherizaan Minwalla says: “I just don’t understand why the photographer thought that exposing a child like this would be okay. It’s so problematic. I don’t think it is a dignified portrayal of a rape victim.”

MSF initially defended the photography, releasing a statement on 6 May saying: “The decision to use [the girl’s] story and image came after deliberation with the medical team and her strong desire to testify. We decided to stand by this call, and to respect her wishes.” But on 13 May, MSF removed five images from the story and pledged to launch an internal review. While they said the review would be made public on completion, a spokesperson was unable to provide a timeframe for when it would be carried out.

Minwalla is founder of Taboo LLC, a consultancy business focusing on human rights, including how to ethically document gender-based violence. Previously, she spent six years in Iraq working with survivors of sexual violence for NGOs including the International Rescue Committee. “Whenever you’re dealing with someone who has been raped, the first issue, of course, is safety,” she says.

The continued presence of the images online may place [the girl] in further danger, Minwalla says. “Are the images exposing the person in any way to more danger? Are they at risk of retaliation?” she says. “Then there’s the question of trauma and stigmatisation. This person is a minor. So clearly, there’s no way they have gone through a recovery process. So what is the risk to their personal safety in terms of their mental health or community stigma as a result of these images? These questions need to be asked immediately,” she adds.

In response to these allegations, Tavakolian says: “I think the concerns expressed here are important. But they also show a double standard, that we see often in the West. This person [Sherizaan Minwalla] is saying my portrait of the girl, which is now shown online, has made her life in the East Congo more insecure. The reality is the girl in question, and most women like her, have to worry if they can make it alive through the next round of fetching water. I wish the world would be really willing to try to make her life secure, by stopping the violence and poverty in East Congo—violence and poverty that has deep roots in western colonialism. Why are activists not writing against the real injustices of inequality that are at the core of all of this? Instead, they choose to campaign to delete the girl, to silence her and the experiences she wanted to be told. This is my personal opinion however. If MSF now says it has misjudged the situation, I respect that.”

The situation with Tavakolian’s images is the latest in a series of controversies surrounding problematic imagery that have beset the Magnum Photos agency in recent years. Issues surrounding the presence, and sometimes commerce, of images of children in conflict zones led Magnum’s management to announce an independent child safeguarding review — and to commit to the implementation of their recommendations. Those were consequently made by Andrew Puddephatt, the chairman of the Internet Watch Foundation.

Activists have noted that Article 3 of the Convention on the Rights of the Child states: “The best interests of the child shall be a primary consideration”. The United Nations International Children’s Emergency Fund (UNICEF), meanwhile, have published ethical guidelines on how to document children who have suffered sexual abuse. The guidelines are unequivocal: “Always change the name and obscure the visual identity of any child who is identified as a victim of sexual abuse or exploitation.”

But Tavakolian does not believe there should be blanket anonymisation of rape victims classed as minors. “A few of the many images I took in Congo were of individuals under the age of 18,” she says. “Once I delivered the images to MSF, it was up to them to set the boundaries and decide whether to publish or not according to their policies.”

“No single rule can be applied to all rape cases,” Tavakolian adds. “Perhaps 99% of the time, the image of the underage victim should not be shared publicly. There is always a small percentage of cases where you have to be there to make a judgment call.”

MSF have traditionally invested heavily in conflict photojournalism and are regarded as one of the few humanitarian organisations still willing to fully support photographers on assignment in poverty stricken and war-torn places like the Democratic Republic of the Congo.

The United Nations has recorded 15,000 cases of rape and sexual violence against children in conflict zones over the past 15 years. This, it warns, is probably a fraction of the true number. As The Economistreports, around 72 million children live in war zones in which fighters sexually attack children, according to research by Ragnhild Nordas of the University of Michigan and co-authors. That is almost ten times the number in 1990.