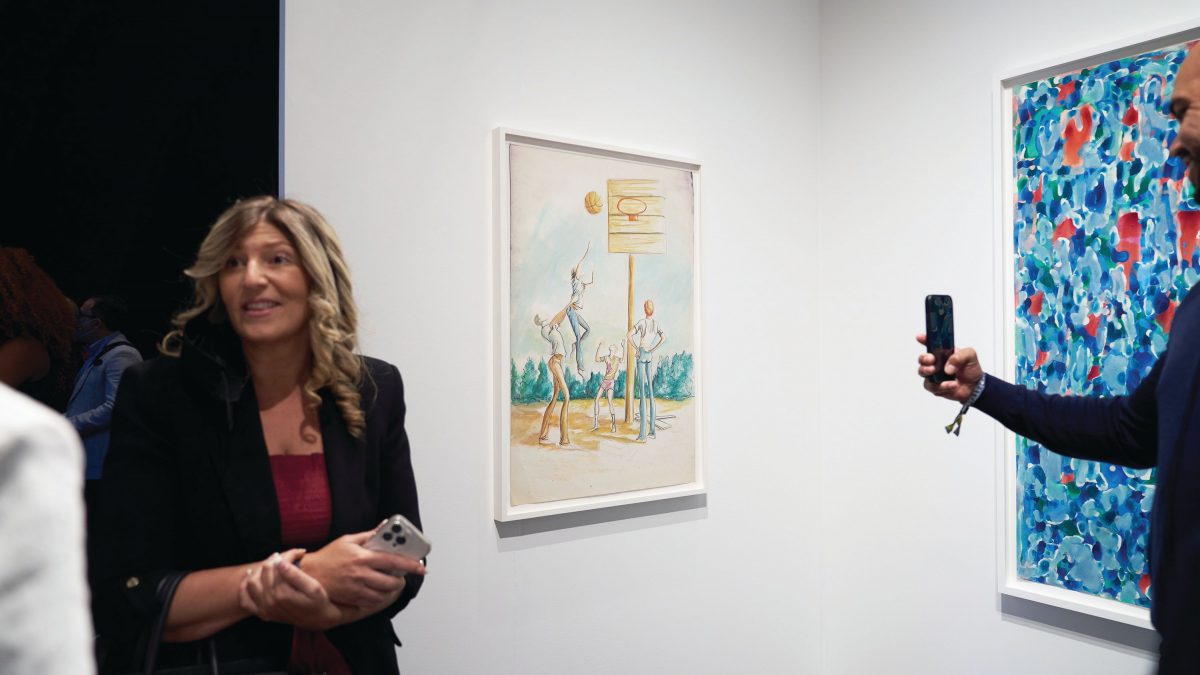 The artist Ernie Barnes (1938-2009) is once again in the big leagues. His comeback began with an unexpected and well-deserved watershed moment at Christie’s sale of 20th-century art on 13 May, during which his landmark 1976 painting The Sugar Shack sold for an arm-hair-raising $15.2m (with fees), 76 times its high estimate of $200,000. Now, Andrew Kreps Gallery and Ortuzar Projects have announced they will co-represent the artist’s estate. Kreps teased the announcement during Frieze New York’s VIP preview on 18 May by coyly displaying Barnes’s 1987 work Study for the Assist in a corner of its booth on the fourth level of The Shed (priced at $75,000, it had sold by the end of the day). The two galleries have previously collaborated on a project with the Barnes Estate, co-presenting in the fall of 2021 the artist’s first exhibition in New York since the 1990s.

From the field to the studio

Barnes’s first brush with prominence came when he was a professional football player in the early 1960s. He spent time with both the Denver Broncos and the San Diego Chargers (now the Los Angeles Chargers). But art had always been a passion, and Barnes is said to have been fined multiple times by former Broncos coach Jack Faulkner when he was caught sketching during team meetings. (Supposedly one of the sketches that he was fined $100 for sold years later for $1,000, a sign of things to come.) After his retirement from football in 1965, Barnes focused his energy on creating new work. His effort paid off. By the 1970s his work had gained national recognition: The Sugar Shack was chosen by Marvin Gaye as the cover of his album I Want You (1976), and it appeared during the opening credits of the CBS television show Good Times.

In 2020, UTA Artist Space in Los Angeles presented Liberating Humanity from Within, a survey exhibition of Barnes’s work that the artist himself had curated prior to his death. In addition, a retrospective of his work was shown at the North Carolina Museum of History in 2018 and 2019 (Barnes was born in Durham) and the California African American Museum in 2019. Andrew Kreps Gallery and Ortuzar Projects will present an exhibition of Barnes’s work in 2023. The fact that Barnes will now have proper gallery representation, something that eluded him during his lifetime, is worth a highlight reel.