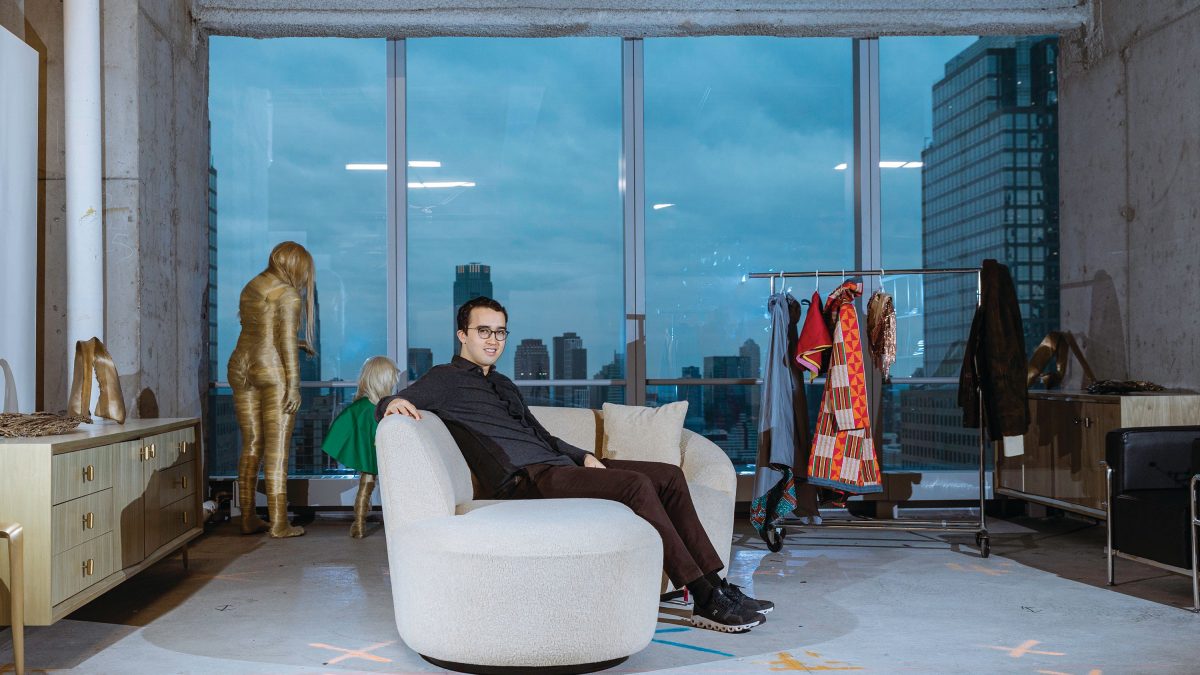 Cory Silverstein: This isn’t the first work I bought, but the first work I remember my grandfather brought to Silverstein Family Park, a parcel of parkland directly north of the World Trade Center complex. Years ago, he had a lunch meeting with Jeff Koons and Jeffrey Deitch, which led to him receiving Koons’s Balloon Flower (Red) (1995-2000). The sculpture was displayed at the park for over a decade and brought joy to an area still recovering from 11 September. I now seek out thoughtful works that spark happiness and nurture community.

What is your most recent buy?

I was recently introduced to Urs Fischer. My colleague and co-founder of Silver Art Projects, Joshua Pulman, and I travelled to Brooklyn to meet Urs, and what we thought would be a 30-minute meeting ended up taking over six hours. I came to acquire one of Urs’s cat paintings, which hangs in my apartment. The cat’s energy has helped me many times come up with creative ideas—he and I share a deep connection.

Answering this with a question: would you force yourself to pick a child?

I recently visited the Royal Academy’s Francis Bacon: Man and Beast exhibition. This was one of the best art exhibitions I have ever seen. I would love to own every work in the show. If I had to pick, Bacon’s Study after Velázquez’s Portrait of Pope Innocent X (1953) would be the ultimate acquisition.

I once had friends send me a collection of works, including a Kehinde Wiley and several artists that are now in the Silver Art Projects programme. I displayed several of the works, not on a wall, but suspended from the ceiling of a raw, unoccupied floor at 3 World Trade Center. These jaw-dropping pieces helped convince stakeholders of the value of having fine art at the World Trade Center.

I’m drawn to the masters. There’s Francis Bacon, of course, but also Francisco de Goya. I would love to know what was going on in both of their minds when they were creating some of their most famous works, particularly Goya in his later years. I would also invite Leonora Carrington for her haunting and hysterical paintings, as well as David Lynch and Aldous Huxley for their genius-level depictions of conjured realities. There are many more… we’re going to need a big venue for this.

Joshua Pulman wisely once advised me: “Don’t take something for free unless there is two-way value.” As collectors, it’s important to support artists and offer a true benefit to them, as they are, ultimately, the ones who can change the world with their ideas and influence. If you want to be attached to an artist, it’s important to find a way to help them, not only by collecting their work but also facilitating introductions and helping them display work in public forums.

What have you missed most during lockdown?

Community is the thing I have missed the most. I love being around artists. They are so inspirational and offer unique perspectives that you’ll never obtain by networking with people in business, philanthropy or otherwise. I have loved being able to visit museums, see live performances and engage with artists in real life again.

We bought an NFT by Signe Pierce, who I first met through the Silver Art Projects programme. We are intrigued by the NFTs and are looking forward to collaborating with more artists and pioneers in the space.

Correction: a previous version of this article suggested that Larry Silverstein had acquired a Jeff Koons sculpture, but it was actually a long-term loan. The sculpture still belongs to the artist. The article has been revised to reflect this.