‘The violence of image-making is embedded in the work’: Lydia Ourahmane explores ancient cave paintings in her new film 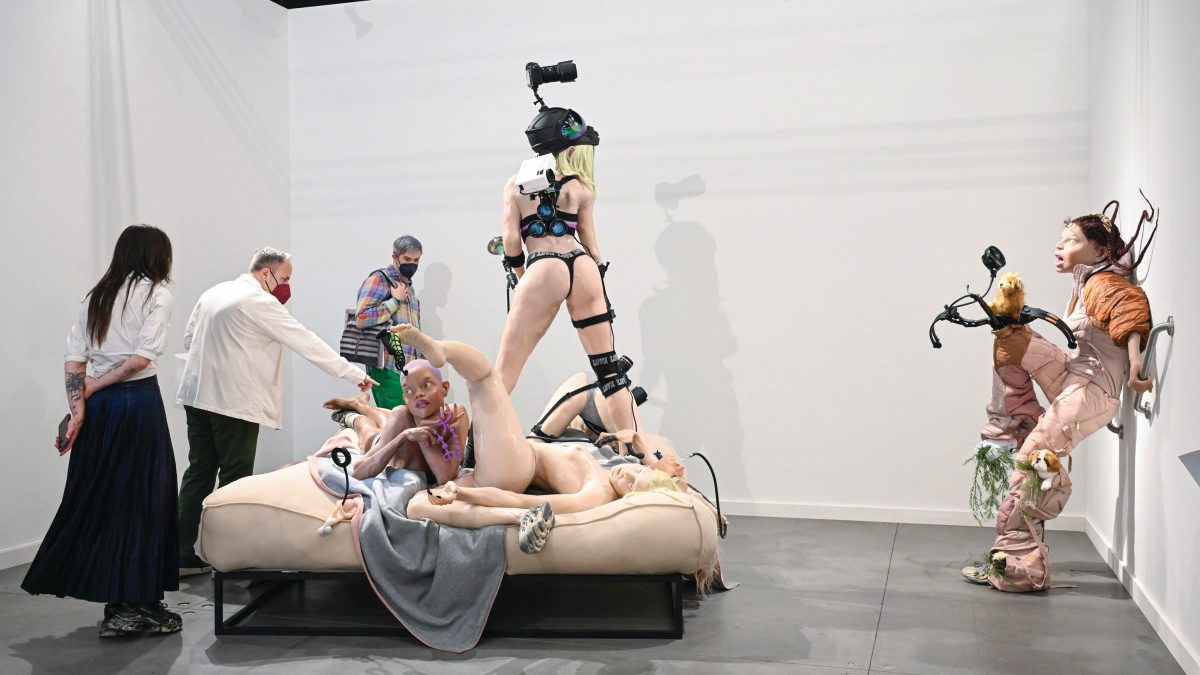 
On Wednesday evening, Fotografiska New York held a dinner celebrating the opening of Black Venus, a group show that places archival depictions of Black femininity alongside work by contemporary artists like Kara Walker, Carrie Mae Weems, Renee Cox and Ayana V. Jackson. Cox and Jackson were joined by the artist Amber Pinkerton, also featured in the show, Pat Cleveland and the artists Kennedy Yanko and Shantell Martin. Martin had painted the interior of Fotografiska’s elevator with her black-on-white marks for the occasion. Were there highlights from Frieze that day? “Cajsa von Zeipel at Company Gallery,” said Amanda Hajjar, Fotografiska’s director of exhibitions. “I’m always impressed with Sophie Mörner’s innovative collaborations with her artists.”

Is there a more masterful stroke of marketing than plying art fairgoers with free, vaguely unsafe doses of caffeine? It was hard to argue with the results: Gagosian had on Wednesday what seemed like a self-replenishing line attached to the vending machine it had plunked in the centre of its stand, where a visitor could collect a bottle of Kafftee, a coffee-tea hybrid ominously promising to make you “Never Sleep Again”. The beverage was the artist Albert Oehlen’s coy comment on commercialism, which also figures in the suite of four paintings from 2014 occupying the stand’s walls, with their abstractions of grocery advertising and McDonald’s signage. It was also a comment on the fair itself, which after all, is a kind of art supermarket.

“We have this complicated situation because of course you couldn’t get a Euro that the machine took, so we made our own coin,” Gagosian director Stefan Ratibor explains, thumbing a coin embossed with the phrase “You can buy taste.” By 2:30pm Gagosian had unloaded about 400 bottles, two paintings and an undisclosed number of coins.

“We made a fungible token in this crazy world of ours,” Ratibor says proudly. “A lot of people have kept the token. But that’s not the idea.”

Visitors to Frieze New York’s VIP preview may have thought they were seeing double when they came across editions of the same Paola Pivi sculpture on Perrotin and Massimo de Carlo’s stands. The work, a 5ft-tall version of Frédéric Auguste Bartholdi’s iconic Statue of Liberty sporting a mask of a child-like face, is the Italy-born, Alaska-based artist’s reflection on the US’s self-image as a nation of immigrants. A large-scale version of the work is currently installed on the High Line, within view of Bartholdi’s monument on Liberty Island. “The mask is based on her son’s face,” says Anthony Bigot, a director at Massimo de Carlo. “She adopted a child from Tibet who had no papers, and the only country that would give him documents was the US.” By the end of opening day both galleries had turned over documents for the works, priced around $150,000, to collectors.

The NFT (non-fungible token) site SuperRare opened a pop-up gallery at 417 West Broadway in Soho, letting blockchain-savvy New Yorkers experience ethereal, digital works of art in real life. The SuperRare Gallery, open to the public through 28 August, will feature five exhibitions during its three-month run organised by the SuperRare curatorial team and guest curators. The debut show, Visions from Remembered Futures, curated by An Rong, features 15 digital artists exploring themes of science fiction and futurism and will be on view through 8 June.