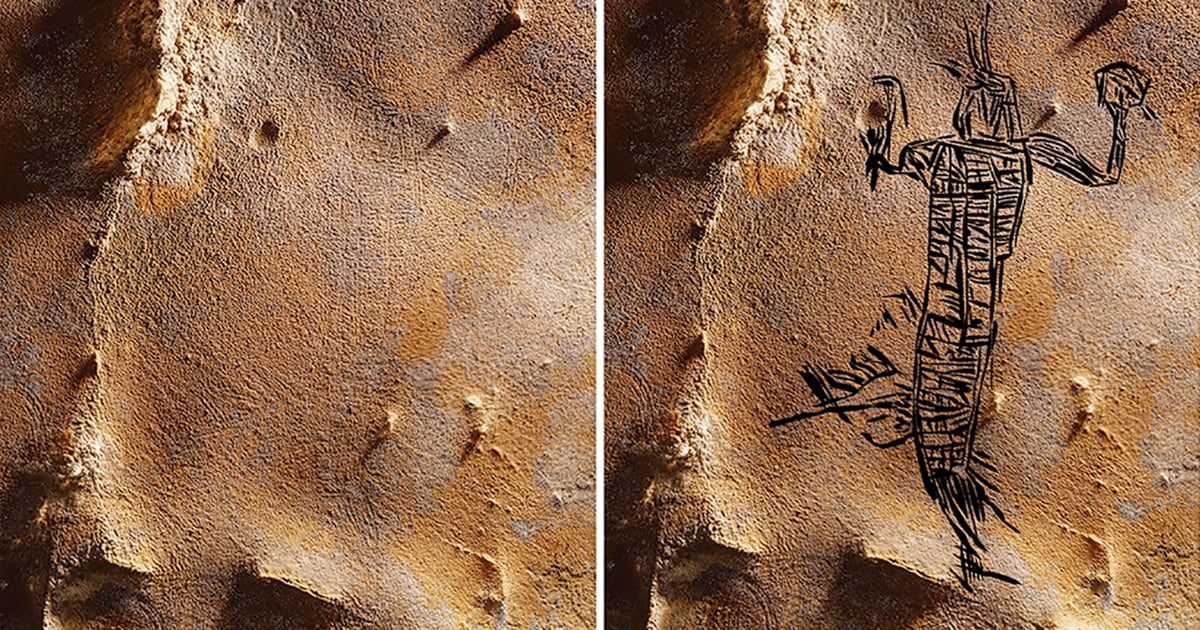 Anthropomorph in regalia, with a rayed circle in the midsection, 0.93 meters tall. All images courtesy of Jan F. Simek, Stephen Alvarez, and Alan Cressler in Antiquity

Hidden in a narrow cavern extending less than two feet from floor to ceiling, five cave drawings are the largest of their kind discovered so far in North America. Three anthropomorphic figures and two rattlesnakes are etched into the mud surface of 19th Unnamed Cave in Alabama—the name is intentionally vague to protect the exact location—with the most sizable glyph measuring nearly 11 feet. The renderings are thought to be from the Early and Middle Woodland prehistoric periods, or between 133 and 433 CE when populations began to shift from primarily nomadic hunting and gathering to settling and establishing agricultural production.

Although the cave is known to house hundreds of Native American drawings, the combination of the small, tight space in this area and the size of the glyphs made it previously impossible for archaeologists to view the works in their entirety. This part of the cave is so limited that even the artists would have had to work on these pieces in segments. Since 2017, though, a research team of Jan F. Simek, Stephen Alvarez, and Alan Cressler has been using photogrammetry, a process that entails capturing overlapping images (approximately 16,000 in this case) and assembling them into a 3D model, to create composites that reveal the full drawings.

The trio published their findings in Antiquity earlier this month with images showing elaborately outfitted figures and diamondback rattlesnakes, a sacred animal to some Indigenous populations that occupied what is now Alabama. Although it’s unclear what exactly these renderings represent, it’s likely that they have a spiritual association:

Native Americans in the Southeast built mounds, by which they could ascend to the spirits of the upper world for religious interaction. Decorated caves represented the opposite: gateways to the worlds below. We know that Native Americans modified their landscapes on very large scales in order to connect the living with the natural and supernatural worlds and to the varied elements of those worlds. The large figures drawn in 19th Unnamed Cave therefore probably represent spirits of the underworld, their power and importance expressed in their shape, size and context.

In addition to the five drawings and smaller sketches of birds and insects, archeologists also found eight pieces of broken ceramics, which are thought to be from five vessels brought into the space. They did not recover any stone tools or bones, meaning the cave was likely used for a limited range of activities. (via Hyperallergic)

Enigmatic figure of swirling lines, with a round head at one end and a possible rattlesnake tail at the other, 2.12 meters wide A) Coiled serpent figure with head in the center, 0.50 meters in diameter. B) Wasp with head to the left and abdomen to the right, 0.35 meters across. C) Bird, 0.4 meters across. D) Anthropomorphic figure surrounded by swirling lines, 0.20 meters tall The ceiling of 19th Unnamed Cave