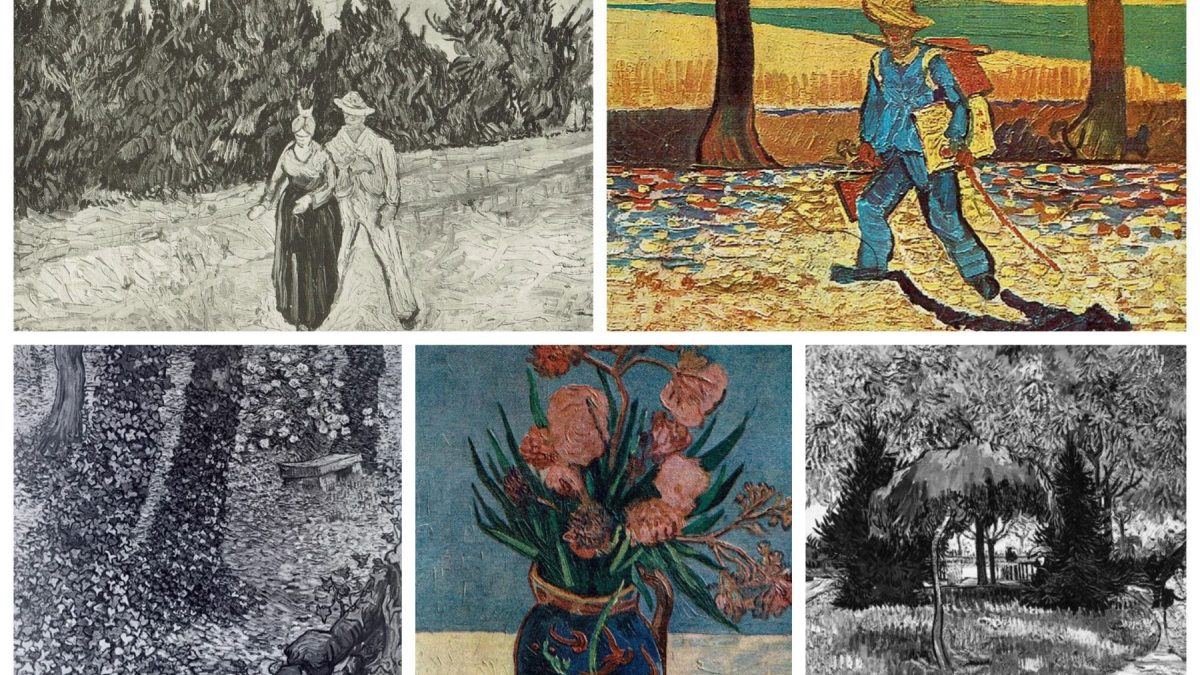 Important Van Gogh paintings were among the losses of the Nazi era and the Second World War. Some were destroyed by bombs, but others simply disappeared, and may have been looted. Here, we focus on five pictures which could have survived—and are perhaps now tucked away in an attic.

Still life with Oleanders (August 1888) was painted in Arles just a few days before Van Gogh’s famed Sunflowers. The oleanders were even depicted in a similarly shaped pot. Vincent gave the still life to a close friend, the postman Joseph Roulin, and it was later acquired by the Paris-based Bernheim Jeune gallery, by the First World War.

In 1942, with the German occupation of Paris, Still life with Oleanders was among 30 paintings (including works by Cezanne, Manet, Renoir and Toulouse-Lautrec) that were quietly sent by the Jewish Bernheim-Jeune family for safekeeping at the château of Rastignac, in the Dordogne, south-west France. There the canvases were rolled up and hidden in a secret compartment in a trunk, which was stored in the loft.

In March 1944 the German army ransacked and then burned the mansion, which had been designed as copy of the White House in Washington, DC. Neighbours reported seeing five trucks leaving the château immediately before the blaze, laden with goods. Although the Van Gogh was probably destroyed by fire, it is possible that it was looted by German troops—and might survive. Unusually, for the pre-war period, we have a colour reproduction of the work.

Trees with Ivy (May 1889) was among the most important landscapes that Van Gogh painted in the asylum where he stayed just outside Saint-Rémy-de-Provence. The atmospheric work depicts ivy creeping up trees in the walled garden where he and his fellow inmates relaxed.

Vincent despatched the painting to his brother Theo in Paris, where it was cherished by his wife Jo Bonger. She loved the picture, writing to Vincent about “the wonderful coolness and freshness of the undergrowth—it’s as if I know that little spot and have often been there—I love it so much”.

The painting was later acquired by the French-based De Rothschild family. After the German occupation of Paris in 1942 Trees with Ivy was seized from the Jewish owners and taken to the Nazi storage facility at the Jeu de Paume gallery.

Hitler’s photographer Heinrich Hoffmann recorded the Nazi deputy leader Hermann Göring proprietorially touching Van Gogh’s impasto, observed by his art advisor Walter Hofer. It is likely, although not certain, that it was taken by Göring, but whatever happened all trace of Trees with Ivy has been lost.

The Artist on the Road to Tarascon

The Artist on the Road to Tarascon (August 1888) depicts Van Gogh with his straw hat and weighed down by his easel and painting equipment. Vincent described the work to Theo as showing him “laden with boxes, sticks, a canvas, on the sunny Tarascon road”. This “self-portrait” was painted on the outskirts of Arles, where Van Gogh made many of his landscapes.

In 1912 the picture was bought by the Kaiser Friedrich Museum (now the Kulturhistorisches Museum) in Magdeburg, in central Germany. This made it among the earliest Van Goghs to be purchased by a public collection. It too was reproduced in colour in the 1930s, a reflection of its importance.

During the Second World War over 400 of Magdeburg’s paintings were secretly moved to a salt mine at Stassfurt, 30km south of Magdeburg, to protect them from Allied bombing. There they were stored deep in the mine, nearly half a kilometre underground.

US troops liberated Stassfurt on 12 April 1945. A few hours later fires broke out in the part of the salt mine where the Magdeburg paintings were stored. Declassified US military documents record that the blaze may have been started “by displaced persons who entered the cave to loot”, although this remains uncertain.

Tobias von Elsner, a former curator at the Magdeburg museum, believes that the fires are likely to have been arson, perhaps in order to disguise the looting of the artworks. No trace has ever been found of the Van Gogh.

Path in the Public Garden


Path in the Public Garden (September 1888) depicts the small public park that lay just outside Van Gogh’s home, the Yellow House. A woman wearing the traditional costume of Arles strolls along the right-hand path, beneath a clump of trees.

By 1920 Path in the Public Garden was owned by the Berlin entrepreneur and collector Eduard Arnhold and his wife Johanna. After her death in 1929 it passed to one of their children. The painting was lost, possibly destroyed, by the end of the Second World War, although the circumstances of the loss remain obscure. Eduard’s great-grandson, Christoph Kunheim, is now searching for further information.

The Lovers (October 1888) shows a courting couple on a tree-lined path, loosely inspired by the public park outside the Yellow House. The row of cypresses, one of Van Gogh’s favourite trees, almost certainly comes from his imagination.

Vincent made a small sketch of the painting in a letter to his brother, along with a short description: “A row of green cypresses against a pink sky with a pale lemon crescent moon. Foreground a piece of waste land, and some sand and a few thistles. Two lovers, the man pale blue with a yellow hat, the woman has a pink bodice and a black skirt.” A number of other Van Gogh paintings include a pair of lovers in a sylvan setting—completed at a time when he was searching for companionship.

The Lovers was bought by Berlin’s Nationalgalerie in 1929. In 1937 it was confiscated by the Nazi government, along with thousands of works that were regarded by the regime as “degenerate”. Many of the less valuable items were simply burned, but many hundreds of the more important ones were kept by Nazi officials or used to raise government funds.

The fate of The Lovers was to be seized by Göring, who sold it off for his personal benefit. It subsequently disappeared and all we now have is a black-and-white photograph and Vincent’s few words of description.


Although the chances of any of these five works resurfacing may seem remote, there is always hope. Six other Van Goghs which had been assumed to have been lost in the war turned up in Russia in the 1990s, at the State Hermitage Museum in St Petersburg. They had been seized by the Red Army in Germany in 1945 and brought back to the Soviet Union, where their existence was kept a state secret.

These included four paintings that had been owned in the 1930s by the German industrialist Otto Krebs: Portrait of Madame Trabuc (September 1889); Landscape with House and Ploughman (December 1889 or early 1890); Morning: Going out to Work (after Millet) (January 1890); and The White House at Night (June 1890).

Two other works on paper also emerged: a watercolour of Boats at Saintes-Maries (June 1888), from the collection of Bernhard Koehler, and a drawing of Starry Night (June 1889), from the Bremen Kunsthalle. None of these have been returned and all are now believed to be held at a ministry of culture storage depot in Moscow.

In 2012 a treasure trove of 1,600 19th- and early 20th-century artworks were found by tax authorities in the Munich home of Cornelius Gurlitt, the son of one of Hitler’s dealers, Hildebrand Gurlitt. The provenance of many of the pieces still remains unclear, but some were acquired during the Nazi period.

Although the Gurlitt hoard does not include any Van Goghs, there are works by his colleagues: Gauguin,Seurat,Signac and Toulouse-Lautrec. The Gurlitt collection was bequeathed to the Kunstmuseum Bern, where it will be the subject of an exhibition opening in September.

Both the emergence of works in Russia in the 1990s and the discovery of the Gurlitt collection a decade ago give some hope that a few of the lost Van Gogh masterpieces may eventually reappear.

• Last night (12 May) Fields near the Alpilles (Champs près des Alpilles) (November 1889) sold at Christie’s, New York for $51,915,000. The picture was once owned by the couturier Yves Saint Laurent and his partner Pierre Bergé. The buyer at Christie’s has not been named. This sale puts the painting among the ten most expensive Van Goghs sold at auction.