Have you seen these lost Van Goghs, which disappeared during the Nazi period? 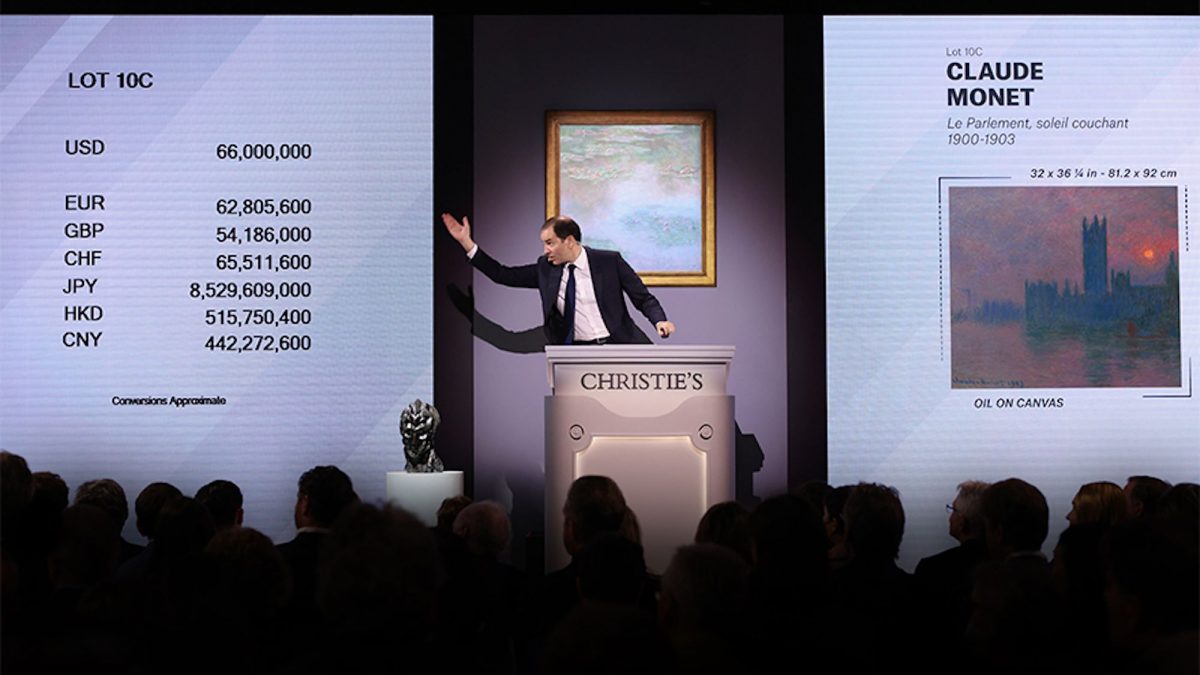 Christie’s pulled off bullish and near-perfect back-to-back evening sales on Thursday that weighed in at a $715m hammer total for the 53 lots that sold. With fees, the tally rose to $831.3m.

For starters, a dozen lots from the estate of noted philanthropist and collector Anne H. Bass realized $313.5m ($363m with fees) compared to pre-sale expectations of $243m-$361m (auction house estimates do not include fees). The firm’s evening sale of 20th century art quickly followed, with 42 lots offered, and scored $401.5m ($468.2m with fees) against pre-sale estimates pegged at $337m-$431m.

The compact but high value single-owner sale kicked off with a trio of Edgar Degas works in various media, starting with the pastel on buff paper Danseuse attachant son chausson from 1887, which hammered at $7.5m (est $4m-$6m), or $8.9m with fees.

The iconic Degas bronze Petite danseuse de quatorze ans, including the dancer’s muslin skirt and satin hair ribbon, from the original wax model from around 1879-81 and cast in bronze in 1927, sold to an anonymous telephone bidder, outgunning all comers for $36m (est $20m-$30m), or $41.6m with fees. It ranks as a record for the artist in that medium. The dancer motif certainly suited the collector: Bass, who died at age 78 in 2020, was a major patron of the New York City Ballet and its school. A holographic version of the work toured Christie’s global showrooms before the sale.

The trio were acquired by Bass between the blue-chip dealerships of Acquavella Galleries and Wildenstein & Co. in the early 1980s, the same decade she divorced her husband, the Texas billionaire oilman Sid Bass. She kept their elegantly furnished Fifth Avenue apartment where the paintings lived for decades.

Both Rothkos were acquired by Bass from the collection of health activist and philanthropist Mary Lasker in 1982. No. 1 sold that May at Christie’s New York to Bass for $297,000. It was the only work from her collection on offer Thursday night that had an auction history.

The $363m tally ranks as the sixth-highest single-owner sale at auction, according to Christie’s.

The Bass bonanza was followed, after a brief intermission, by the various owners sale of 20th century art. It was top heavy with financial guarantees, with 17 third party guarantees and three house deals.

The sale kicked off with Ruth Asawa’s suspended sculpture Untitled (S. 469, Hanging Two Complex interlocking Forms with Symmetrical Interior Forms in brass and copper wire from 1955, which made $1.6m (est $800,000-$1m), or $1.9m with fees.

A masterful early abstraction by Howardena Pindell, Untitled #24 from 1978-79 and executed in acrylic, paper, powder, sequins and glitter on sewn canvas squares, sold for a record $900,000 to yet another telephone bidder (est $300,000-$500,000). With fees, the price came to $1.1m. The seller had acquired the work in 1980, decades before the artist achieved the long-overdue market recognition she is now receiving.

In the evening’s back-and-forth exchange of movements, decades and price points, Georgia O’Keeffe’s close-up view A Sunflower from Maggie from 1937 and deaccessioned by the Museum of Fine Arts, Boston, failed to sell at $4.8m (est $6m-$8m), the only casualty of the marathon evening. But Monet’s bright winter scene La mare, effet de neige (1875) made $22m (est$18m-25m), or $25.5m with fees.

Yet another Monet, the fifth one offered in the evening and long cloistered in a French collection, Champ d’avoine et de coquelicots, painted in Giverny in 1890, found a new home for $12m (est $12m-$18m), or $14.1m with fees.

A rare-to-market and stunning Pablo Picasso bronze deaccessioned by the Metropolitan Museum of Art to benefit its acquisition fund, Tête de femme (Fernande), conceived in 1909, attracted a posse of four bidders and made a whopping $42m against an on-request estimate in the region of $30 million. With fees, the price came to $48.4m. Another cast sold for $4.9m (with fees) at Christie’s New York in November 2001. The 21-year absence certainly made a big difference. Though it was not needed in the end, the Met’s version was backed by a house guarantee.

Moving back to post-war work, Jackson Pollock’s powerhouse drip painting in oil, enamel, aluminum paint and gesso on paper and mounted on canvas from 1949 realized $47m, just over the on-request estimate of $45m. With fees, the price came to $54.2m. It last sold at auction at Christie’s New York in May 1988 to Tokyo dealer Kazuo Fujii for $3.5m (with fees).

A major and luscious Willem de Kooning, Untitled XXI from 1977, a stellar year for the artist, brought $21.5m (just over the on-request estimate in excess of $20m), or $25m with fees. It came backed by a third-party guarantee.

Joan Mitchell’s large-scale abstraction, seemingly floral themed, Untitled from 1969, sold for $7.5m (est $7m-$10m), or $8.9m with fees. Mitchell is the subject of a major traveling retrospective currently on view (until 14 August) at the Baltimore Museum of Art, which no doubt whetting the market’s appetite.

Another woman artist in that Abstract Expressionist pantheon, Helen Frankenthaler, was represented by the colour-charged and mural-scaled abstraction February’s Turn from 1979, which went for a hammer price of $2.9m (est $2.5m-$3.5m), of $3.5m with fees. The seller acquired it at Sotheby’s New York in November 1992 for just $79,500.

The sale continued to jarringly toggle between eras and movements. Andy Warhol’s chilling still life Skull (1976), formerly in the collection of the Andy Warhol Museum in Pittsburgh, sold for $22m (est $25m-$35m), or $24m with fees.

A relatively austere Vincent van Gogh landscape, Champs près des Alpilles from November 1889 and bearing an amazing provenance trail from postman and van Gogh friend Joseph Roulin to Yves Saint Laurent and Pierre Bergé, realized a hammer price of $45m, matching the on-request estimate in the region of $45m. With fees the price came to $51.9m.

Another category-defying outlier was Emanuel Leutze’s epic narrative Washington Crossing the Delaware from 1851—a smaller version of the iconic history painting that hangs at the Metropolitan Museum—which hit a record $39m (est $15m-$20m), $45m with fees.

Back on the post-war front, Georg Baselitz’s stalking figure from his Hero series, Spekulatius from 1965 and marked by the artist’s initials on the groin area, sold for $6.5m (est $8.5m-$10m), or $7.8m with fees. It was one of the few entries that came in shy of its low estimate, even with tacked-on fees. It last sold for a then-record (with fees) £3.2m (with fees) at Sotheby’s London in June, 2011.

Even with the seemingly constant barrage of multiple bidders for each lot, nothing approached the OK Corral shootout for Ernie Barnes’s famous, raucous, multi-figured dancing scene The Sugar Shack from 1976 (est $150,000-$200,000). Bidding opened at $120,000 and suddenly a bidder in the back of the saleroom started to jump bid increments in Wild West fashion only to be matched by another contender seated two rows away and who kept turning around trying to figure out who his nemesis was.

The cat-and-mouse game continued to the winning hammer and record price of $13m, at which time the victor shouted “my lucky number”. With fees, the record price came to $15.2m. The artist’s previous record was set at Christie’s last November with Ballroom Soul (1978), which fetched $550,000 (with fees).

The buyer of the Barnes on Thursday night, Bill Perkins, a film producer, hedge fund manager and high-stakes poker player from Austin, Texas who is also the author of Die with Zero: Getting All You Can from Your Money and Your Life, strode out of the saleroom, only to say, “I grew up watching his work on TV.”

Christie’s big night at Rockefeller Center concluded with a single-lot sale of a fossilised velociraptor skeleton, which outpaced expectations to sell for $12.4m (with fees) against an estimate of $4m-$6m.

The evening auction action resumes on 16 May at Sotheby’s with the second tranche of the Macklowe collection.