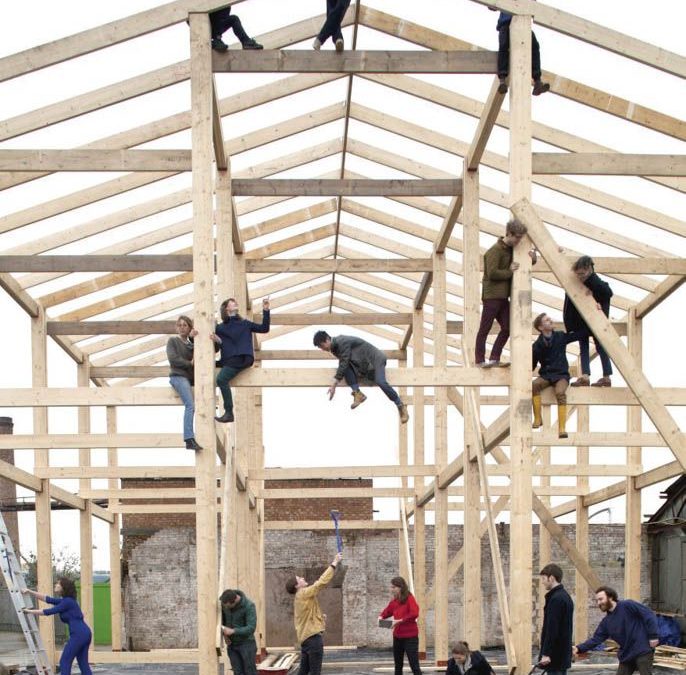 Assemble first attracted widespread attention when the London-based design and architecture collective, which had barely been in existence for five years and with most members still in their 20s, won the 2015 Turner Prize. Controversially, Assemble were the first non-artist collective to make the shortlist, let alone win the prize. They were nominated for their regeneration work with the Granby Four Streets Estate in Toxteth, Liverpool, and their Turner Prize exhibition consisted of a showroom for Granby Workshop, selling a collection of domestic products that they had designed for the homes being renovated, often using recycled materials from the houses themselves. The workshop continues to flourish and, since then, Assemble have worked across the fields of art, design and architecture, still often in tandem with communities, promoting what they describe as a do-it-yourself sensibility. Projects range from an adventure playground in Glasgow to an atelier for the Luma Foundation in Arles, from the design of a Charlotte Perriand exhibition to a micro-brewery in Japan. Now, Assemble are collaborating with Nottingham Contemporary and local schools throughout the British city on an ambitious and radical show, which takes as its starting point a 1968 drawing by the Italian Brazilian architect Lina Bo Bardi. The Art Newspaper talked to Assemble founding member Jane Hall about the collective’s latest combination of art, design and community.

The Art Newspaper: The Nottingham Contemporary exhibition has as its point of departure an ink-and-watercolour illustration made by Lina Bo Bardi of an unrealised, huge-scale, fantastical playground in front of her Museum of Art in São Paulo. What’s the significance of this work?

Jane Hall: Bo Bardi made this illustration of the outside spaces at the museum in 1968, just before the building’s opening. And the important thing is that during its construction, Brazil transitioned into military dictatorship. So she’s drawing and celebrating public life, which wouldn’t have existed at the time. And what we are saying is that she’s doing this through the lens of childhood: everything’s oversized and playful, and she’s showing the institution at the heart of this, but also in the background. So this occupation is legitimised through the institution and its presence. And I suppose we’re making a parallel with Nottingham Contemporary as a public art institution at the heart of Nottingham, and how we might rethink the occupation of the gallery in terms of its role and who it’s for. So we’ve taken Lina’s illustration as a point of departure and then, through the process of developing the show, we have been working closely with the Schools of Tomorrow programme in Nottingham and thinking more about the city, and particularly the artists in schools that we’ve been working with. We’ve been going into the schools and doing workshops with the kids and the artists.

How does this manifest itself in the gallery?

We have interpreted two of Lina’s play structures as large, three-dimensional sculptures: a slide we have called The Big Red and a multicoloured dish with animals on that we have called The Animal Roundabout. Working with ten- and 11-year-olds in one particular primary school has also led to the design of another big sculpture called The Funhouse. These sculptures are in two adjoining galleries; the process of working with students and associate artists in the schools is exhibited around these rooms in various different formats, sometimes applied directly to the wall, some as photographs and some screen-based or projected. We like to describe it as a group show with the education team as equal curators and including all these amazing artists who are doing really great work in Nottingham but who aren’t normally given a central position in the gallery’s regular programme of art shows.

Assemble have previously been involved in several public playground projects. Are you now reimagining the art gallery as a play space?

We are always in dialogue and tension with this idea of a playground. The invitation when people enter the gallery is for everyone to take off their shoes—adults as well. And it’s very much a show that’s for adults as much as it is for children. The idea is you are using the space as you see fit: you’re running around, you’re climbing over the sculptures or moving all the different parts. And while it could be described as a playground, I think many of the rules that you would have to abide by in a playground are not particularly relevant.

Assemble has its origins as an informal group of young architects who studied together at Cambridge and then got together to create The Cineroleum, which for five weeks in 2010 transformed a disused petrol station in London’s Clerkenwell Road into a cinema. How did this happen?

We graduated at the height of the recession and actually found it very easy to get jobs in architecture because everyone had fired their more expensive architects. Most of us were thinking about going back to study in a year or so, and in the meantime we wanted some of the excitement that we’d had making things together as students. And that ended up being The Cineroleum: we did it for us, there was no client. We spent about a year planning it and then it ran for five weeks. But in order to realise it, we required other skills. So lots of people who joined the group had backgrounds in other fields like electrical engineering, or knowledge about projection and running cinemas—stuff like that. By the end of The Cineroleum, about two-thirds were the original group from Cambridge and the rest were other people who had completely different backgrounds, as well as people who had just been turning up on site every day, and who became part of the group through being there all the time. It wasn’t about changing architecture, or practice, or anything like that; it was just that we really loved building something together. We only formed as Assemble because we needed a name to get some funding for our next project, Folly for a Flyover, a temporary arts venue under a disused motorway flyover in Hackney Wick. We had to open a bank account and they were, like, “what’s your name?”.

What was the impact of winning the Turner Prize in 2015?

It was very surreal and quite hard to get our head round why the art world with a capital A would see us as valid candidates for the Turner Prize. We saw it as an interesting journey but it really excited the community in Liverpool to get this recognition for their work. One of the big outcomes was that it’s been much easier to get funding to continue to work in Granby. What was at that time a very amateur client who was literally trying to save their own homes is now a professionalised client, the Granby Four Streets Community Land Trust, who are now doing all sorts of interesting social, cultural and community-based projects which they hadn’t imagined before. The Turner Prize also allowed Assemble to establish a level of visibility that has given us more agency to self-initiate work and to do work on our own terms, which has always been part of our practice. So sometimes it’s been useful to be seen as artists, and sometimes we’ve struggled not to be seen just as architects—we’re somewhere in the middle.

Around the time of your winning the Turner Prize, you said that “our work can’t be boiled down to an acceptance speech, or even into a manifesto”. Is this still the case?

Yes, definitely. Probably the most annoying thing about Assemble is that no one is quite clear what Assemble is. People come and go, everyone’s interested in their own thing, and sometimes it’s hard to know what it is that makes us Assemble rather than just a group of individuals, many of whom also do other work. We are always changing and introducing new systems; it’s very fluid. But we’ve now got enough shared interests and history to mean that, even though there are loads of things that many of us might not have been involved in, there’s something about all our projects which makes them recognisable as Assemble. We are basically a partnership now although decision-making is, wherever at all possible, still collective. But now there is clearly a second generation within Assemble, and it would be great for them to take more ownership over the narrative and hopefully usurp its founders.

• Assemble + Schools of Tomorrow: The Place We Imagine, Nottingham Contemporary, UK, 7 May-4 September